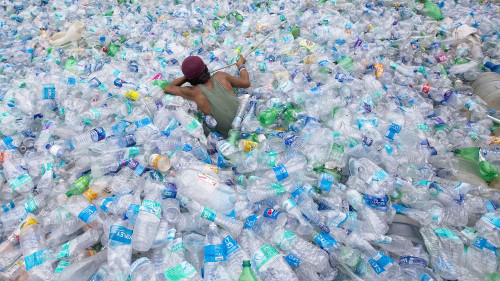 The industrial revolution has brought,except from the capacity for fast and mass production of products, also new consumer habits. One of these is the use of disposable products because of a supposed convenience to the consumer. A huge volume of objects used in everyday life was replaced by the same object designed for a single use, and after that comes its rejection. As plastic material dominates, one can understands that besides the issue of excessive quantities of waste, at the same time the problem of unreasonable use of carbon to create plastics and other synthetic materials is encountered. According to the report of the US Environmental Protection Agency (USE.P.A.), 33 tonnes of plastic was produced in 2014, while only 9.5% was recycled in 2013 and according to the Commission, 50% of the plastics produced in the European Union end up in landfills. The recent (for the Greek data) measure on plastic bags is an example of an environmental policy for reducing the "disposable" bag.