After the relentless rain, South Africa sounds the alarm on the climate crisis 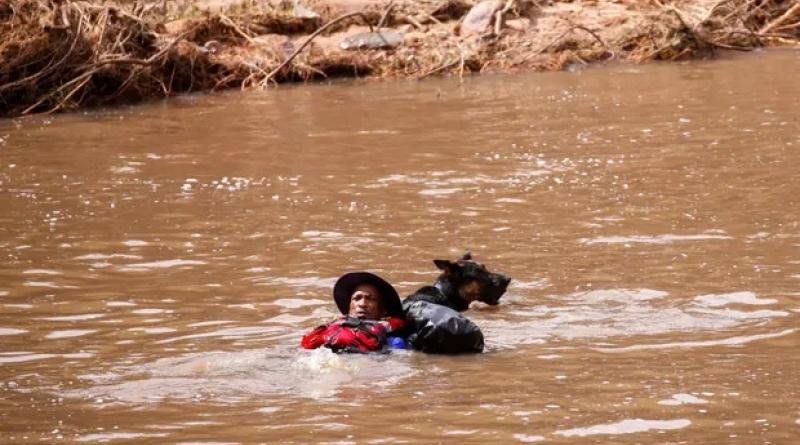 Many are still missing after this month’s floods. Extreme weather is becoming more frequent, and it can be devastating

Survivors of South Africa’s devastating floods have described “sheet upon sheet of relentless rain” that washed away entire houses, bridges and roads, killing about 450 people and making thousands homeless.

The storm, which delivered close to an entire year’s usual rainfall in 48 hours, took meteorologists by surprise and has been blamed by experts on climate change. The new disaster comes after three tropical cyclones and two tropical storms hit south-east Africa in just six weeks in the first months of this year.

The full extent of the devastation caused by the floods in South Africa this month is yet to become clear, with many victims still missing and authorities still learning of new damage around the eastern coastal city of Durban. Many tens of thousands of people remain without water, and there are rising concerns about an outbreak of infectious disease.

Uzair Ismail, 35, said he had been forced to flee his home in central Durban with his wife and eight-year-old when water and mud flooded in through doors, windows and plumbing in the middle of the night when the storm struck almost two weeks ago.

“We were lucky to get out alive … Slowly, slowly we had built ourselves up to a livable home with a few possessions and we had left everything. But others lost much more. We are safe at least,” Ismail told the Guardian.

Some families were almost entirely wiped out in the disaster, losing eight or 10 members.

The South African president, Cyril Ramaphosa, described a “catastrophe of enormous proportions” and attributed the disaster to the climate emergency.

“It is telling us that climate change is serious, it is here,” Ramaphosa said as he visited the flooded metropolitan area of eThekwini, which includes Durban, shortly after the floods. “We no longer can postpone what we need to do, and the measures we need to take to deal with climate change.”

Others have echoed Ramaphosa’s warning.

“This is just the beginning of a series of extreme weather events that are linked to climate change … Africa pollutes least and suffers most from climate change,” said Ibrahima Cheikh Diong, the director general of African Risk Capacity, an agency set up by the African Union to help governments better plan for disasters and mitigate their impact.

Poor people living in makeshift settlements built on unstable, steep-sided gorges around Durban were worst affected by the floods. Most have inadequate or no drainage systems and homes are sometimes flimsy shacks that offer little protection against the elements.

Fernaaz Hussain, a 35-year-old coordinator for aid agency Islamic Relief, who lives in Durban, said she had first thought the rain was just part of the city’s tropical weather, but became worried when it did not stop.

“It was just relentless. There was just sheet after sheet and you couldn’t see anything beyond. It just did not stop. It just got worse and worse. I have never seen anything like it in my life. The rain was so heavy and the wind so strong we feared the windows [would] break,” Hussain said.

She described shipping containers floating down motorways and an oil tanker washed up on Durban’s famous beach.

“You can’t do anything to help yourself. You feel just totally powerless. And tomorrow it could happen again and there’s nothing we could do,” she said.

Experts say the impact of the climate crisis is increasingly obvious across Africa, with tens of millions suffering from drought in the Sahel and parts of east Africa, while the continent’s southeastern coast is hit by intense storms.

The World Weather Attribution (WWA) network of scientists, which has pioneered ways to understand the causes of extreme weather events, said climate change had made the heavy rains along Africa’s south eastern coastline both heavier and more likely.

“Again we are seeing how the people with the least responsibility for climate change are bearing the brunt of the impacts,” said WWA co-founder Friederike Otto, of the Grantham Institute at Imperial College London.

WWA scientists used weather observations and computer simulations to compare rainfall patterns under today’s climate to that of the pre-industrial area, before global heating.

They focused on two of the wettest periods – during Storm Ana in Malawi and Mozambique and during Cyclone Batsirai in Madagascar.

“In both cases, the results show that rainfall associated with the storms was made more intense by climate change and that episodes of extreme rainfall such as these have become more frequent,” WWA said in a report of their findings.

Their conclusions matched broader climate research showing that global heating can increase the frequency and intensity of rainfall, though determining exactly how much climate change influences the extreme events is made difficult by a shortage of high quality historical rainfall records for the region.

The South African Weather Service said that although it was impossible to attribute an individual event to the climate crisis, “globally, all forms of severe and extreme weather … are becoming more frequent and more extreme than in the recent past (as a direct result of global warming and associated climate change). In other words, heavy rain events such as the current incident can … be expected to recur in the future and with increasing frequency.”

Many countries in Africa are poorly prepared for such disasters.

Though the most industrialised country on the continent, South Africa has struggled to deliver timely and efficient help to flood victims. One reason for the shortage of water among those displaced by the floods in and around Durban there is that around half of the local government’s fleet of 100 water tankers were found to be inoperable when officials ordered their deployment last week. Thousands of troops have now been deployed to assist the aid operation.

Analysts say extreme weather events can contribute to political instability across the continent. In South Africa, repeated failure to offer timely and effective relief to victims has exacerbated a general lack of faith in the African National Congress, in power since 1994.

“It’s just been normal people helping each other. I’ve had more support from strangers. I won’t even ask the government. The funds always go missing and never reach the right people,” said Ismail.

Police have been forced to use teargas to disperse protesters angry at a lack of assistance from authorities.

“It is only because ANC officials regularly fail to care in desperate moments such as these that so many people are convinced that the party is hopelessly corrupt and that even the flood relief funds will be stolen,” wrote commentator Stephen Grootes in an editorial on the Daily Maverick news website.

Sean Christie of Médecins Sans Frontières said the NGO was working with local health authorities to supply nurses and counsellors to flood victims.

“On psychosocial mental health, we have seen lots and lots of need,” he told the Guardian.

cover photo: A search and rescue team member looks for bodies with the help of a dog, following torrential rains that triggered floods and mudslides, in Umbumbulu, near Durban, South Africa. Photograph: Rogan Ward/Reuters