Amazon deforestation 'at highest level in a decade'. 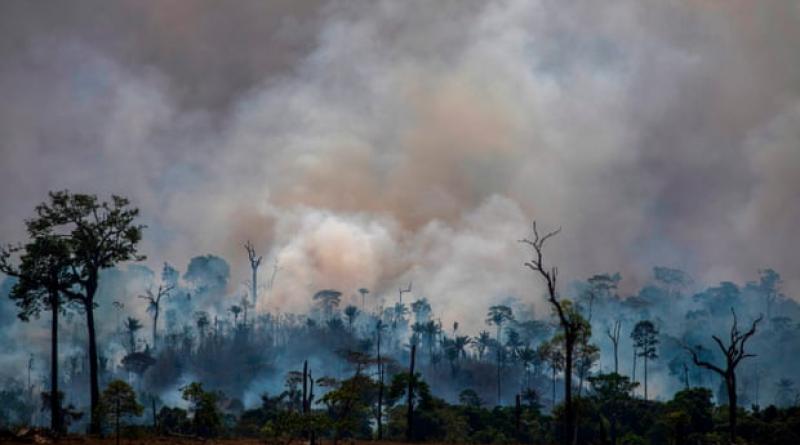 Almost 10,000 sq kms lost in year to August, according to Brazilian government data.

Deforestation of the Brazilian Amazon has hit the highest annual level in a decade, according to new government data which highlights the impact the president, Jair Bolsonaro, has made on the world’s biggest rainforest.

The new numbers, showing almost 10,000 sq kms were lost in the year to August, were released as emboldened farm owners scuffled with forest defenders in Altamira, the Amazonian city at the heart of the recent devastation.

The assault on the planet’s biggest terrestrial carbon sink by land-grabbers, agribusiness, miners and loggers is accelerating. In the year until 30 July 2019, 9,762 sq kms were lost, an increase of 29.5% over the previous 12 months, the Brazilian space agency INPE said.

The clearance rate – equivalent to about two football fields a minute – is the fastest since 2008, pushing Brazil far off course from reaching its Paris agreement goals to cut carbon emissions.

The annual numbers are compiled with information from the Prodes satellite system, which is considered the most conservative measurement of deforestation. Although less steep than the rise suggested by monthly alerts from the Deter system, it confirms an upward trend that Bolsonaro and his ministers said was a “lie”, which the former head of the space agency was fired for repeating.

Environmental groups blamed the government for “every inch of the increase because it weakened environmental protections, supported loggers and encouraged land-grabbing”.

“It is no surprise this is happening because the president has defended environmental crime and promoted impunity,” said Adriana Ramos of the Socio-environmental Institute.

The monitoring NGO, the Climate Observatory, said the rise was the third highest in history (after 1995 and 1998), and was likely to continue.

“Proposals like legalising land-grabbing, mining and farming on indigenous lands, as well as reducing the licensing requirements for new infrastructure will show that the coming years will be even worse,” Carlos Rittl, its executive secretary, said. “The question is how long Brazil’s trading partners will trust its promises of sustainability and compliance with the Paris agreement, as forests fall, indigenous leaders are killed and environmental laws are shattered.”

The increasingly confrontational tactics of rightwing ruralistas (farming, timber and mining interests) were evident at a civil society gathering in Altamira, in Pará state, on Monday morning.

The meeting – titled Amazon: Centre of the World – brought together hundreds of forest guardians and their supporters, including indigenous leader Raoni Metuktire, riverine communities, quilombolas, environmental activists, academics, artists, Catholic bishops, nuns and European visitors from Extinction Rebellion and Fridays for Future. They aim to draw up a forest manifesto that would put nature and the Amazon at the heart of the international debate about the climate and biodiversity crisis.

Many powerful interests in this region do not want global attention on their activities.

“I call upon landowners, loggers and businessmen to block this document,” said a rallying message from one of the organisers of a counter-demonstration. “This is very important for Brazil.”

Dozens of farmers and landowners attempted to disrupt the opening by surging forward, waving Brazilian flags and chanting nationalist slogans. They were rebuffed by indigenous warriors in war paint and women’s groups who formed a human barrier between the speakers and the hecklers. Police intervened to calm the situation, but with the protesters hoping to boost their numbers later in the day, tensions continued.