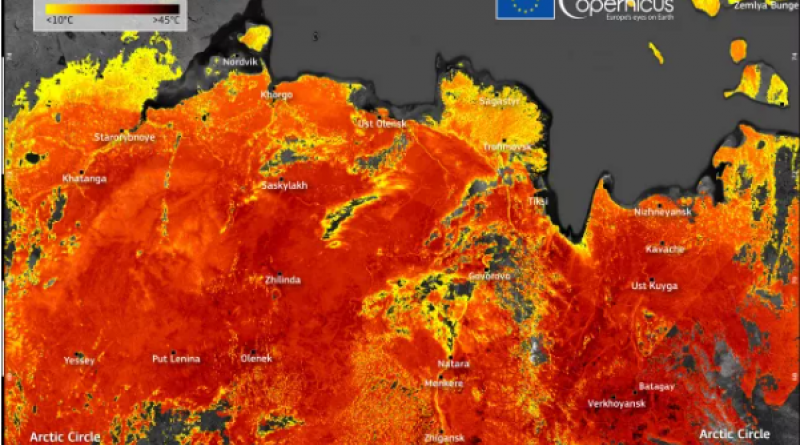 On the same day last year, air temperatures in the area blazed past 100 degrees F for the first time in recorded history.

On the summer solstice (June 20 — the longest day of the year) two European Union satellites recorded a scorching temperature of 118 degrees Fahrenheit (48 degrees Celsius ) on the ground in Arctic Siberia.

This isn't quite a new heat record; as a post on the EU's Copernicus satellite website noted, this egg-boiling temperature was detected only on the ground in Siberia's Sakha Republic, while the region's air temperature (the temperature people would actually feel while walking around) was a toasty 86 F (30 C).

However, that's still an anomalously high temperature for the Arctic Circle — and one that could exacerbate the region's melting permafrost, which is the only thing preventing ancient caches of greenhouse gases from reentering Earth's atmosphere, according to Gizmodo.

The EU's Copernicus Sentinal-3A and 3B satellites recorded the high temperatures in the midst of an ongoing heat wave over much of Siberia. The heat spike is, unfortunately, a predictable start to summer, following a spring that saw hundreds of wildfires scorching the Siberian countryside and blacking out major cities with blankets of smoke.

Many of these spring fires were "zombie fires," so named because they are thought to be the rekindled remains of wildfires that ignited the previous summer and were never fully extinguished. The zombie fires smoldered for months under winter ice and snow, fed by the carbon-rich peat below the surface. When the spring melt arrived, the old fires blazed anew, Live Science previously reported.

If last summer is any indication, the hot solstice temperatures are just the beginning. Precisely one year ago, on June 20, 2020, the same region of Siberia recorded the first 100 F (38 C) day above the Arctic Circle — the hottest temperature ever recorded there. The sweltering day in Siberia fits into a larger climate change trend. For years, average temperatures in the Arctic have been rising at a far faster rate than anywhere else on Earth, largely due to melting sea ice induced by man-made global warming.