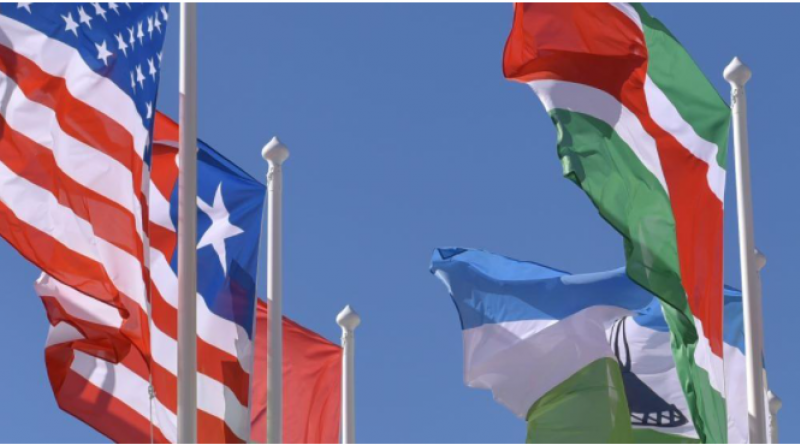 In 2009, developed countries committed to jointly mobilize $100 billion annually in climate finance by 2020 to support developing countries in reducing emissions and adapting to climate change.

This long-standing commitment is key to trust and solidarity between developed and developing countries, rooted in the fact that developed nations are responsible for the majority of carbon emissions since industrialization began, and generally have greater capacity to offer support.

The OECD recently estimated that developed countries mobilized $79.6 billion in climate finance in 2019. It’s likely that these nations failed to collectively meet the $100 billion goal in 2020 (though actual reporting for that year is not yet available).

New WRI research finds most developed countries are not contributing their fair share toward meeting the $100 billion goal. Three major economies — the United States, Australia, and Canada — provided less than half their share of the financial effort in 2018, based on objective indicators such as the size of their economies and their greenhouse gas emissions. Other nations that provided less than half of their fair share were Greece, Iceland, New Zealand and Portugal. In total, more than a dozen developed countries were falling short of their responsibilities.

Breaking Down National Contributions to the $100 Billion Climate Finance Goal

Our analysis is the first to comprehensively break down how much public climate finance each of the 23 developed countries have provided towards the $100 billion commitment as of 2018, the most recent year for which comprehensive data are available. (Private finance mobilized by developed countries can also count towards the $100 billion goal, but we did not look at these flows — estimated around $15 billion in 2018 — because data are much less complete, and it’s difficult to attribute to individual countries.)

Several trends emerge about the state of these 23 countries’ climate finance contributions. Here’s what we found:

Accounting for the $100 billion relies on multiple reporting systems. Moreover, countries and institutions take different views about what to count as climate finance in their reporting. For example, Japan counts finance for “more efficient” coal power plants, while other countries do not.

That’s not the only wrinkle. Some countries provide only grants as climate finance, while others count loans to developing countries, which must be repaid. For example, France, Japan and Germany — each of which ranks highly on a surface-level glance at headline numbers — provided most of their finance through loans. Most of the countries ranked in the middle provided the majority of their finance as grants, which requires more budgetary effort for contributors but is often better for resource-strapped developing nations.

2. The Biggest Economies Provide the Most Climate Finance, but Not Relative to Their Size. 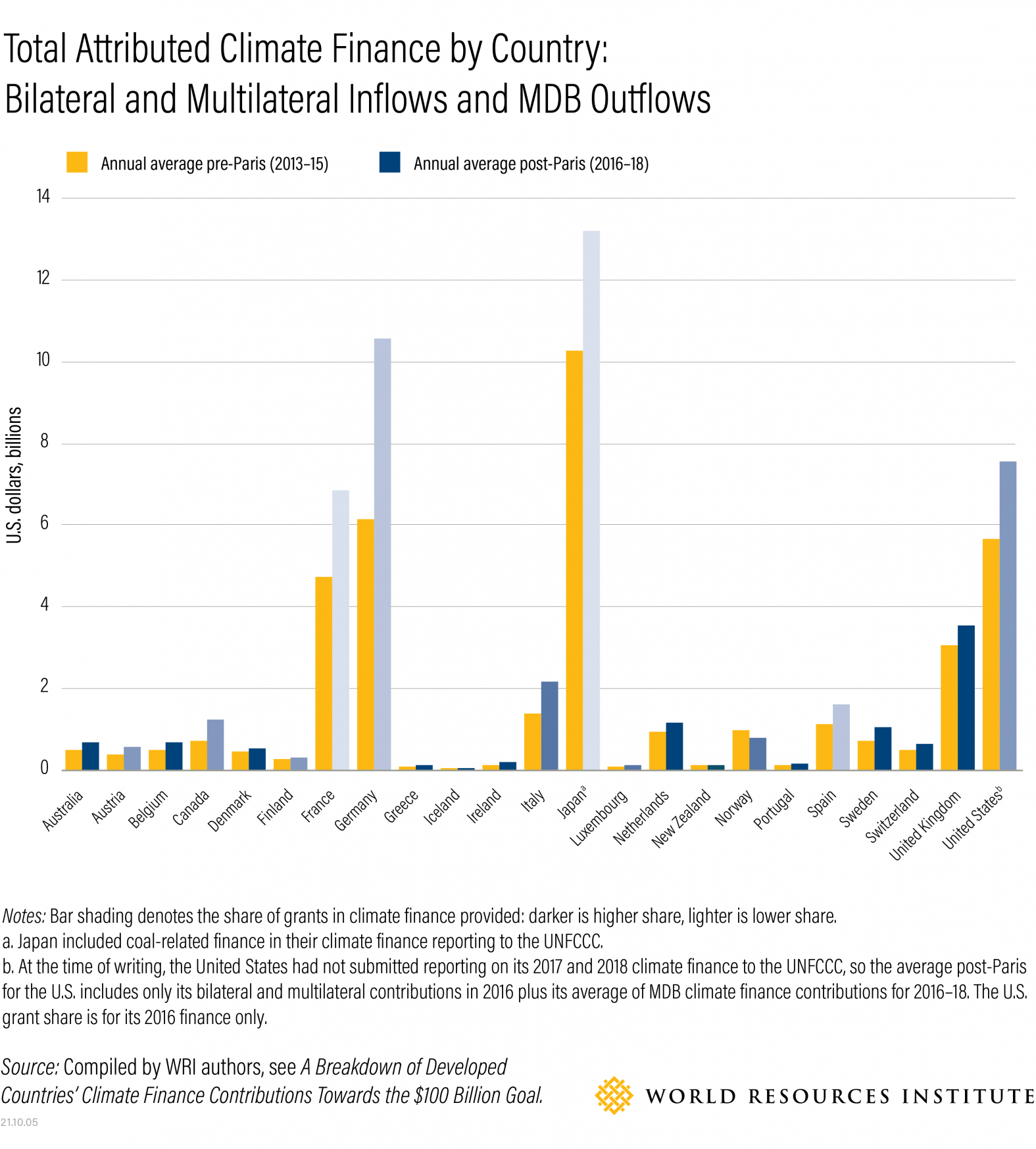 But the biggest contributors change when you look at provision of finance relative to economic size.

While three of the major nominal contributors — Germany, France and Japan — also provided over 0.25% of their gross national income (GNI) as climate finance, the U.S. has the lowest provision of any developed country relative to its GNI, at 0.03%. Luxembourg, Norway, Sweden and Denmark were also providing a significant amount relative to the size of their economies, all more than 0.15%.

If every developed country were to make the same effort relative to the size of its economy to reach the $100 billion goal, countries would need to contribute 0.22% of GNI. Only France, Germany, Japan and Luxembourg reached this level between 2016 and 2018. If mobilized private finance were to meet $20 billion of the $100 billion goal, with the other $80 billion coming from public sources, countries would need to contribute 0.18% of their GNI. In this scenario, Norway and Sweden were then also providing a sufficient share. 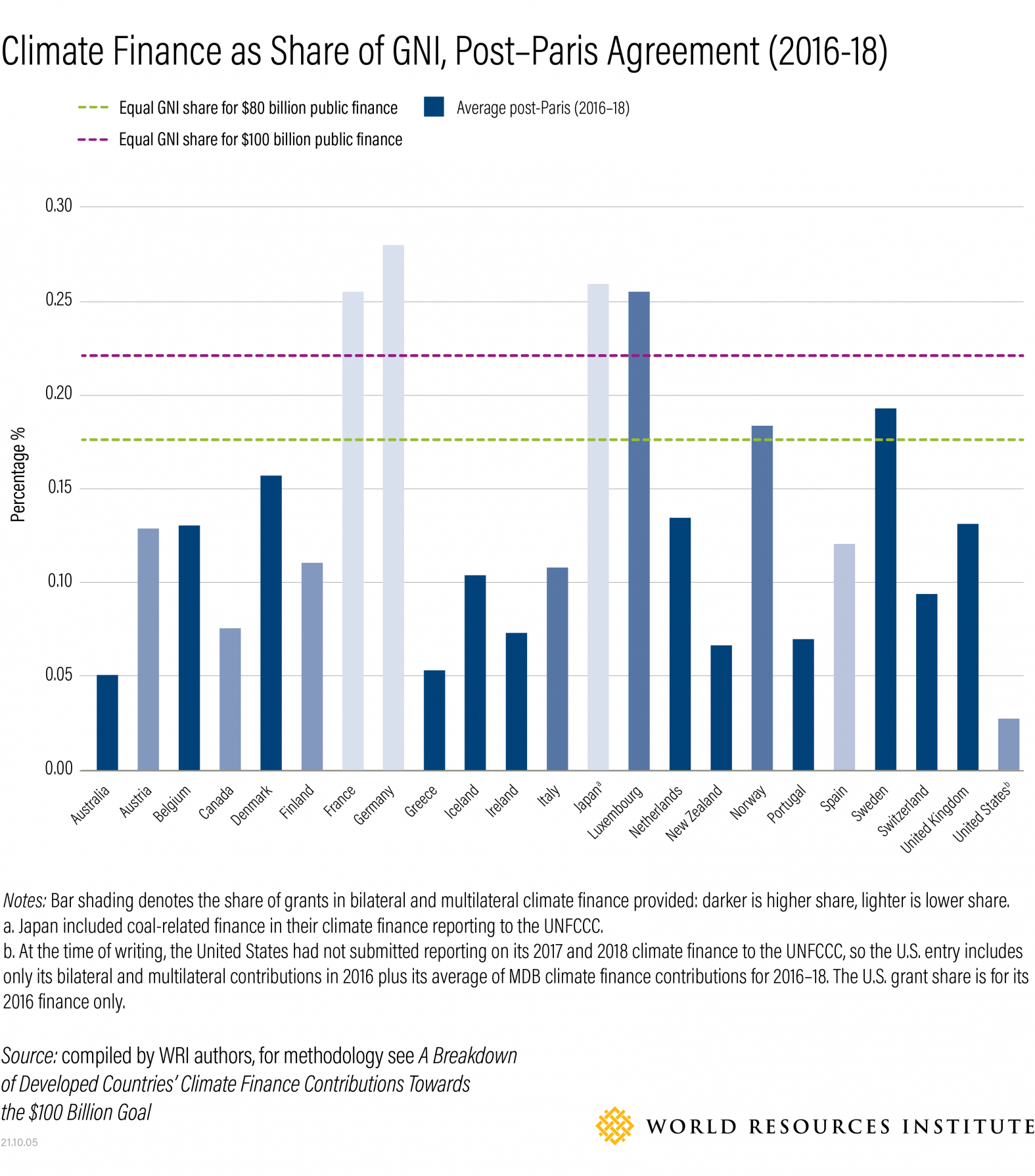 3. Most Countries Aren’t Contributing Their Fair Share of Climate Finance.

Some international institutions, such as the UN and the European Union, use a combination of objective indicators, such as GNI and population, to determine how much different countries should contribute to their institutions’ budgets. Such an effort-sharing approach has never been agreed upon for the $100 billion goal, but in recent years researchers from Oxfam, Overseas Development Institute, WRI and ETH Zurich have proposed approaches for how climate finance effort might be fairly allocated among contributor countries.

Since the obligation to provide climate finance is rooted in both developed countries’ relatively larger responsibility for climate change (i.e. their greenhouse gas emissions) and capacity to provide support (i.e. wealth), most of these approaches use metrics that capture these dimensions. Some also bring in other criteria such as population (to account for high per-capita emitting countries) and overseas development aid provision (as a measure of willingness to provide international funding).

Despite different methodologies, they are broadly aligned in showing that the United States had a shortfall of at least $21 billion and up to $40 billion per year between what it provided in climate finance in 2018 and its fair share of the $100 billion climate finance effort (between 40% and 47% of the total). Under every effort-sharing approach, the U.S. shortfall was more than double the shortfalls of all other countries combined. 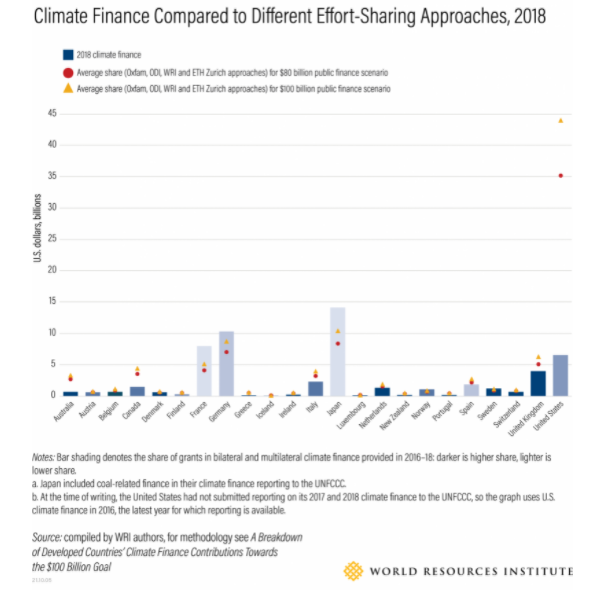 Based on the average of different effort-sharing approaches, only seven of 23 countries provided their fair share of climate finance in 2018, assuming $80 billion of the $100 billion came from public sources: France, Japan, Norway, Germany, Sweden, Denmark and Austria. If all $100 billion came from public sources, only five countries provided enough: France, Japan, Norway, Germany and Sweden (though France, Japan and Germany all provided most of their finance as loans).

At the other end of the spectrum, the United States, Greece, Australia, Iceland, New Zealand, Portugal, Canada and Ireland provided less than half of their fair share in 2018 under both the $80 billion and $100 billion scenarios. Canada and Australia had shortfalls in 2018 exceeding $1 billion according to every effort-sharing approach. The United States provided less than 20% of its fair share and less than half of its finance as grants.

President Biden’s recent pledge to increase U.S. climate finance can help close the gap somewhat, but it’s unlikely to fully meet the country’s fair share of the effort towards the $100 billion goal. 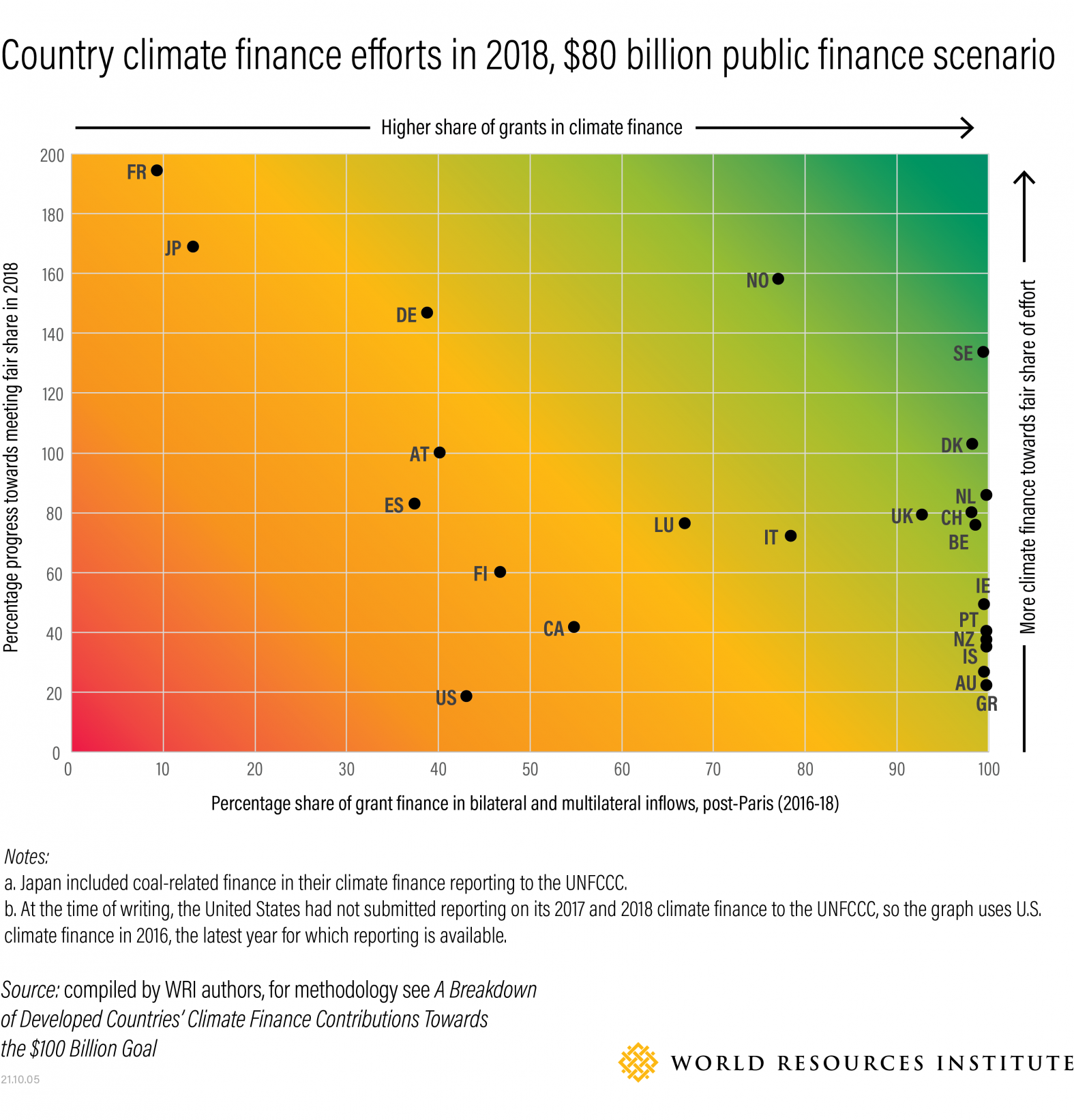 The Paris Agreement includes an aim to balance climate finance between mitigation and adaptation. Many climate-vulnerable countries and the UN Secretary-General have called on developed countries to achieve a 50/50 split.

The largest climate finance contributors in absolute terms — France, Germany, Japan and the United States — heavily skew their finance towards mitigation, so adaptation finance makes up only about 25% of total climate finance. Australia, Belgium, Iceland, Ireland, the Netherlands and Switzerland were approaching a 50/50 balance in their provision of adaptation finance. The United Kingdom is the only country in the top five contributors to get close to achieving a balance (and indeed has set its own target to do so). 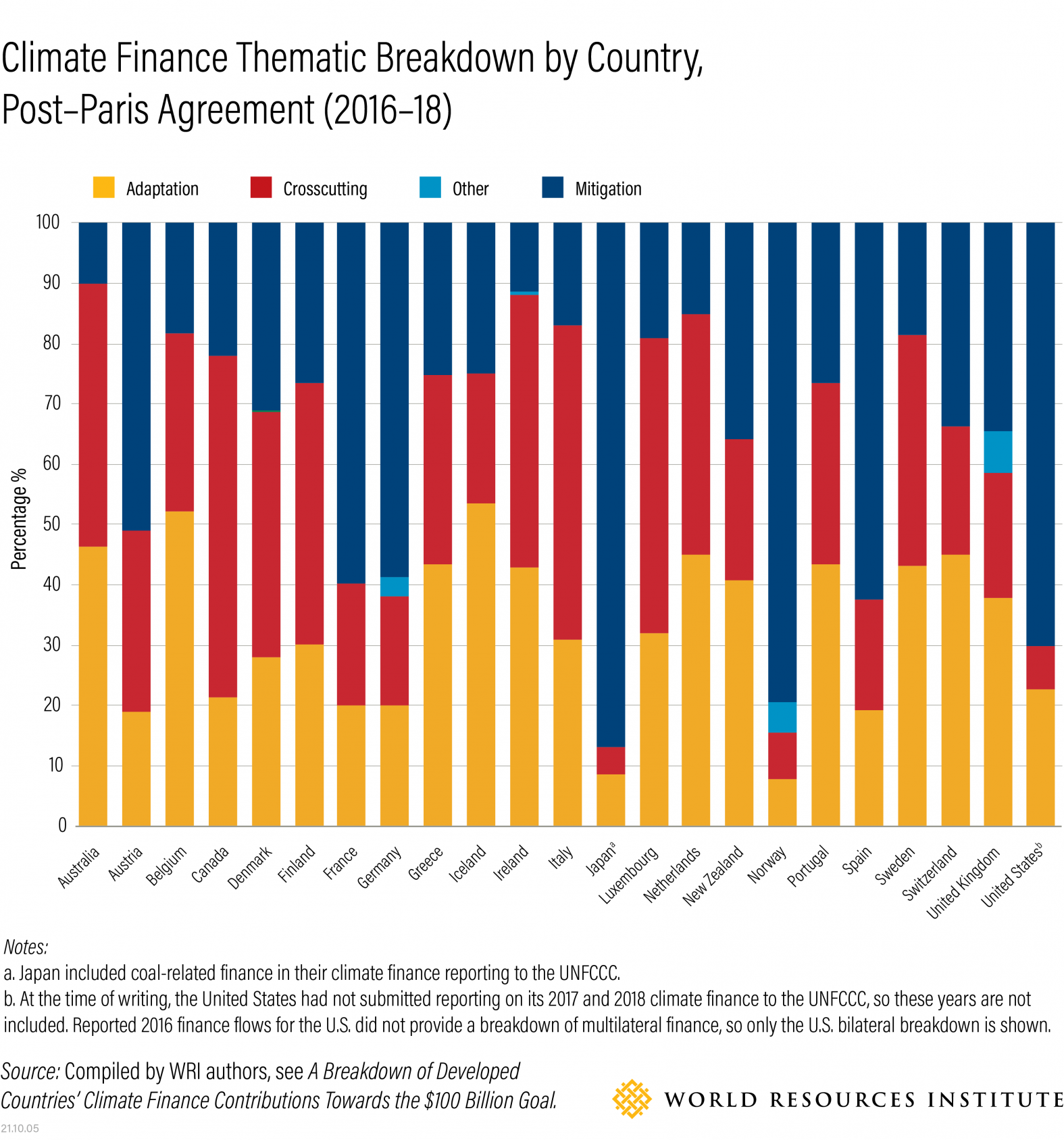 Developed countries vary in which channels they prioritize for their climate finance contributions. The majority put their largest shares through multilateral development banks (MDBs) such as the World Bank and Asian Development Bank, reflecting the fact that developed countries are significant shareholders in these institutions and that MDBs are dedicating an increasing share of their funding to climate objectives.

By far the smallest channel used by every country is other multilateral institutions, such as the Green Climate Fund and Adaptation Fund. This is concerning given the Paris Agreement mandates many of these funds with a special role in the implementation of the Agreement. These funds also give developing countries a greater say in the governance of climate finance and enable them to directly access funding, something climate-vulnerable countries are calling for.

Getting Climate Finance on Track

Climate finance is key to supporting developing countries’ increased climate action. Developed countries must ensure they collectively deliver on the $100 billion goal and go beyond it.

Three actions will be critical:

First, many countries must provide more climate finance to contribute their fair share of the effort, with the United States holding the greatest responsibility.

Second, countries need to improve the quality of the climate finance they provide. Developing countries need more finance in the form of grants and for adaptation. Developed countries should address these requests, which are also emphasized in the Paris Agreement.

And finally, data reporting needs to improve significantly. Rectifying reporting ambiguities is crucial to increase accountability, transparency and trust. The upcoming UN climate conference in Glasgow (COP26) will consider the common tabular formats that developed countries must use to report on financial support under the Paris Agreement’s Enhanced Transparency Framework from 2024 onwards. This provides an opportunity to address gaps and improve individual countries’ reporting, building on the lessons learned from the current transparency system.

Finance holds international climate action together and powers its acceleration. There is no time to waste. 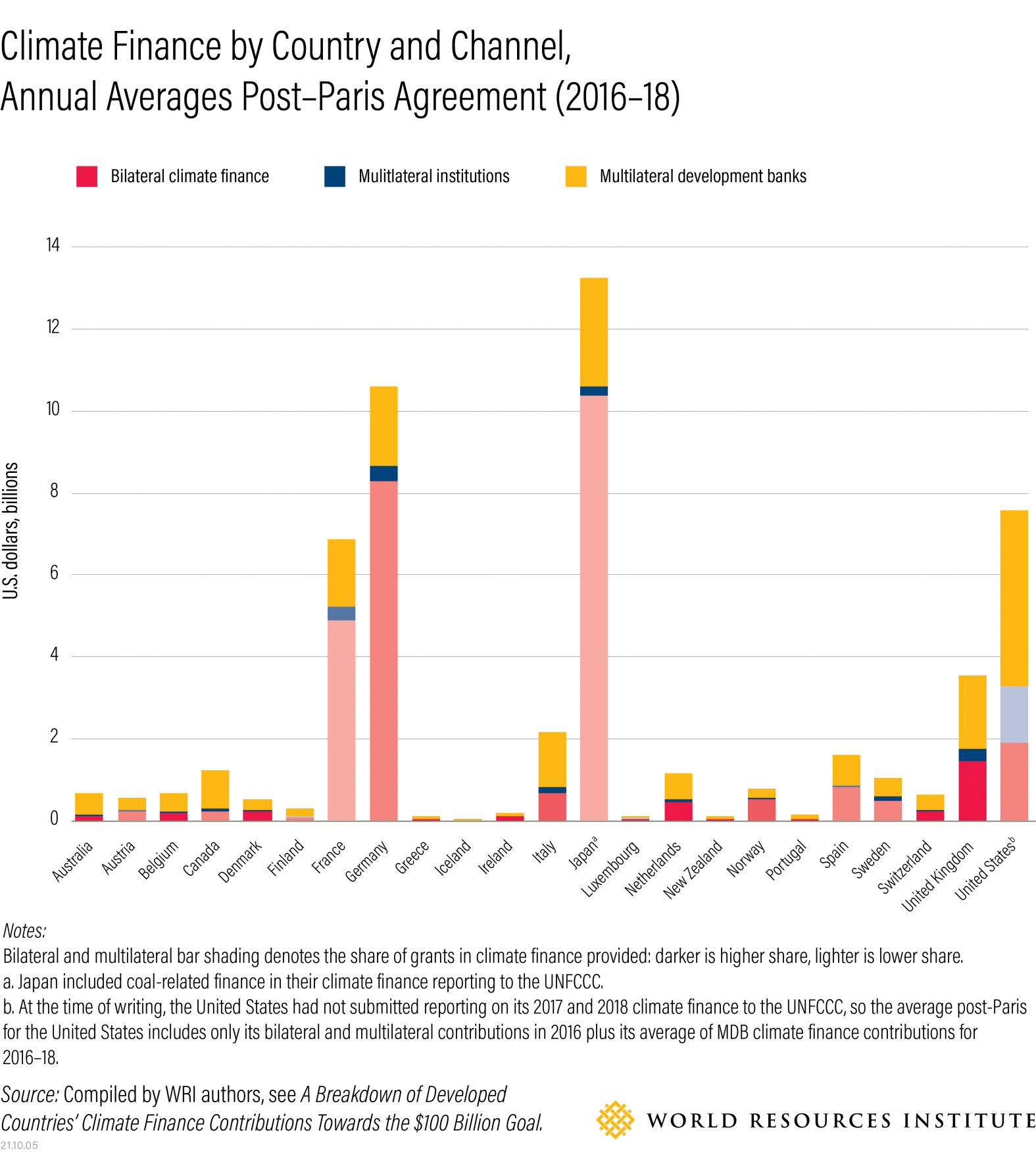