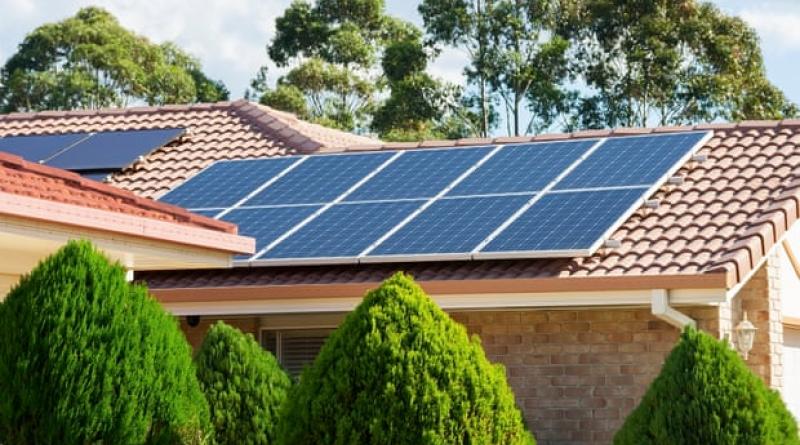 A team of Australian researchers are claiming a world first in a global race to develop cheaper, more flexible and more efficient solar panels after their experimental cell passed a series of heat and humidity tests.

Using a type of crystal material known as perovskite, the group found that a simple glass and synthetic rubber coating around the cell was enough to stop it from degrading too quickly.

Research teams around the world are working with different formulations of the perovskite crystals – seen as a potential game-changer for the solar industry.

Solar cells that use the crystals to convert sunlight to an electrical current are about 500 times thinner than those that use silicon – the material that’s been the basis for solar cells since the 1950s.

As well as being thinner, perovskite crystals are also flexible, meaning they could potentially have much wider applications than the brittle silicon-based cells.

Scientists have been working on perovskite solar cells for only about a decade, but have already raised their levels of efficiency at converting sunlight to about 25% – a level that has taken about 40 years to achieve with silicon-based cells.

But the perovskite crystals degrade much faster than silicon – holding them back from commercialisation. When heated, the perovskite outgasses – degrading the material.

“Perovskite cells will need to stack up against the current commercial standards. That’s what is so exciting about our research. We have shown that we can drastically improve their thermal stability.”

Solar cells that are used commercially need to be able to withstand years of exposure to weather.

Ho-Baillie said the early perovskite solar cells only lasted a few days before degrading. The perovskite crystals are cheaper, Ho-Baillie said, than the glass they used to help cover the cells.

The team devised the glass and synthetic rubber surround and then put the cells through three sets of international standard tests, which include repeatedly cycling the cells through temperatures of -40C to 85C, as well as exposing them to high humidity levels.

“It’s a world first to pass these three tests in a low-cost way,” said Ho-Baillie. “Not only did the cells pass the thermal cycling tests, they exceeded the demanding requirements of damp-heat and humidity-freeze tests as well.”

“Perovskite opens the market in ways that we hadn’t thought of. It’s lightweight, it’s flexible, and you could fold it up and roll it out. For us, the sky is the limit.”

She said her team was also testing a form of the solar cells for use in space, and were currently “torturing it” with space plasma.

R&D programs on perovskite solar cells are under way around the world, including at the US Department of Energy, several European research ventures, and Australia’s CSIRO.

As well as recording success in the tests, Ho-Baillie’s research team also report in Science the use of a technique that was able to isolate and measure the way the perovskite crystals degraded.

The research was supported by the Australian government’s Australian Renewable Energy Agency, which is also funding a suite of research and development projects to push perovskite cells to commercialisation.

Dr Klaus Weber, an associate professor at the Australian National University and an expert in emerging solar cell technology including perovskite cells, who was not connected to the study, said it was “an important step along the way to commercialisation.”

He said: “This is an important achievement which demonstrates the potential of this new technology to further lower the already low costs of photovoltaics.

“The study shows that one of the key concerns with the technology, namely its limited stability, can be addressed with good engineering.

“I would caution, however, that the commercialisation of a new technology is a long and complicated process, and that it requires many years before such a new technology becomes widely available. So, don’t hold off installing solar panel in the belief that something better will be available tomorrow.”

Weber said perovskite technology was “of intense interest” because it combined “a rare combination of highly desirable properties”.

The technology offered multiple “and potentially very cheap” ways of making solar cells, could be modified across different applications and allowed more efficient cells to be produced.

He added: “Typical layers have a thickness about one-hundredth the diameter of a human hair. This means that material costs can be very low as well – which is important when you want to make many square kilometres of product.

“Given their promise, it is not surprising that many researchers are attracted to the challenge of improving the understanding of this technology and making better solar cells.”

An exciting boost for solar cells.