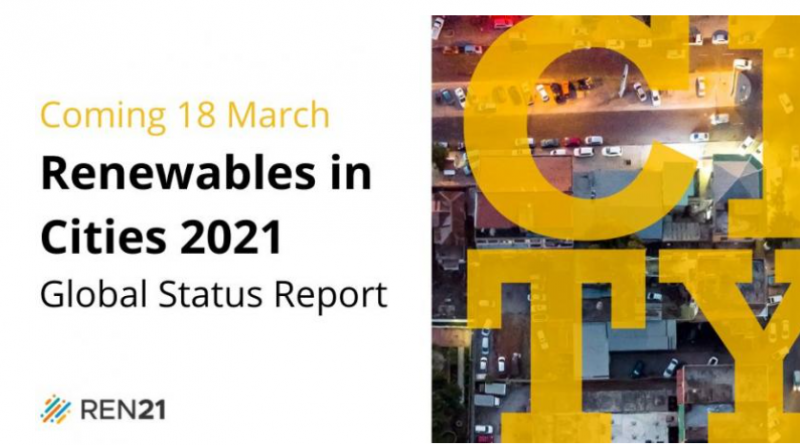 REN21’s Renewables in Cities Global Status Report (REC) series provides an overview of the status, trends and developments of renewable energy in cities, using the most up-to-date information and data available. The REC’s neutral, fact-based approach documents in detail the annual developments in policies, markets, investments and citizen action, with a particular focus on renewables in public, residential and commercial buildings as well as public and private urban transport. This report aims to inform decision makers and to create an active exchange of views and information around urban renewable energy.

REC 2021 is the result of a collaborative effort, building on REN21’s unique data and reporting, with more than 330 data contributors and peer reviewers and over 30 individual interviews from around the world. The report is endorsed by an Advisory Committee of more than 20 organisations, including major renewable energy players and city networks. In this collaborative process, data are collected on hundreds of cities, ranging from mega-cities to small and medium-sized cities and towns.

The second edition of the Renewables in Cities Global Status Report (REC) now available! The launch will be followed by a series of thematic and regional events. Stay tuned on REN21’s events page.

Cities are high-impact areas: they are home to more than 55% of the global population and account for around three-quarters of global final energy consumption. Further, cities also are essential for accelerating the development of renewables in sectors that lag, namely buildings and transport. Rapidly replacing fossil fuels with renewables across high-polluting sectors, namely the heating and cooling of buildings and transport, is critical for the success of urban climate strategies and helps to create sustainable, equitable and thriving cities – more resilient, with more local jobs and cleaner air.

Key Findings of the 2021 Edition

Past Editions of the Renewables in Cities Global Status Report

In the report you can find chapters on: