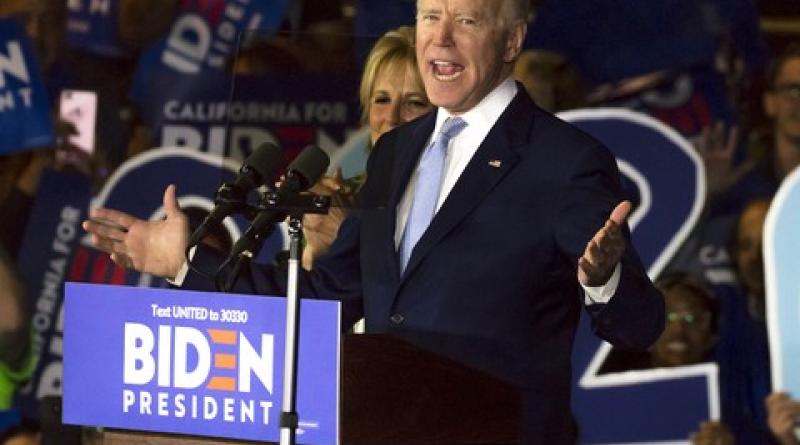 Why Joe Biden needs to restore shareholder democracy in the US.

We can’t waste any more time addressing the global warming issue we’re facing. The amount of greenhouse gases (GHG) in the atmosphere are rising to dangerous levels. Nevertheless, due to political conflicts of interest, governments are slow to act. Moreover, the US is not exactly one of the frontrunners in fighting climate change. That’s a shame because the US's wealth and resources could prove pivotal in global climate action.

There are many ways we can contribute to a better environment ourselves, however. One approach is to use our pensions and wealth to help steer the big oil companies into falling in line with the Paris agreement's ambitions (reducing our GHG emissions by 50 percent by 2030 compared to 1990).

In Europe, small-time investors can get an audience at the annual general meetings (AGMs) for shareholders. Surprisingly, this is hardly possible in the US. Through extensive lobbying with the Trump administration, oil companies structurally undermined the effectiveness of the US democracy.

Can we do something about this as ordinary citizens? Or do we need intervention by the new government?

And how did this happen?

How to exert influence over massive oil corporations with limited assets

Shareholder activism by (institutional) investors and NGOs alike has picked up a lot of steam over the past few years. Activist shareholders buy ownership in a company to change the strategy for various reasons, but usually to generate more profit.

For oil companies to remain profitable, they need to pivot away from fossil fuels to green alternatives. The goal of big oil needs to change from fossil fuel producers to energy providers. Unfortunately, large oil corporations' senior management remains unwilling to change course without either external intervention by governments or internal “encouragement” of shareholders.

In Europe, NGOs such as Follow-This are filing climate resolutions at AGMs. They buy shares with donations or ask for proxy-votes of other shareholders, essentially lending voting power. Using the shares, the NGOs gain the right to attend AGMs and request voting on corporate strategy and the board of directors' appointment. Shareholder voting is a democratic process in Europe, as it should be. That means that if you get enough votes, the company has no choice but to adjust its strategy.

As you can see from the following chart from Follow-This, they’re getting increasingly successful in getting other (institutional) investors and shareholders on board: 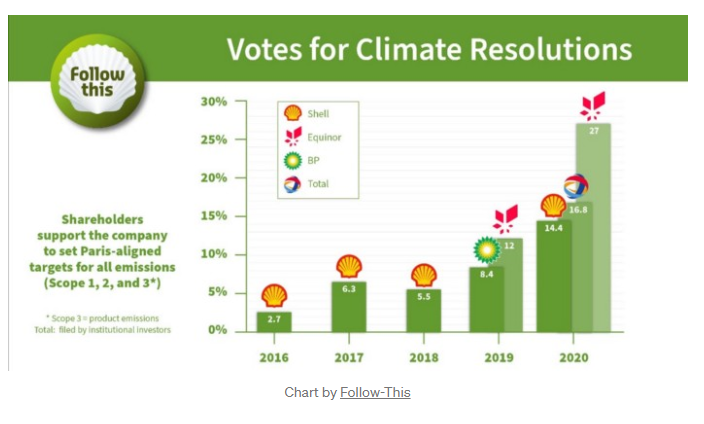 I figured that if they’re able to get more and more votes for climate resolutions at AGMs in Europe, that should also work for US companies, right?

Well, it turns out this is not the case. Apparently, the power of shareholders over senior management has been undercut by the US government. A slap in the face of democracy, as all people should be able to make their voice heard. The arguments presented by the government are both irrational and laughable. I’ll continue with that next.

Under the Trump administration, the Security and Exchange Commission (SEC) supported big oil companies such as Exxon Mobil to reject shareholder voting on climate resolutions because:

“The proposal would micromanage the company by seeking to impose specific methods for implementing complex policies in place of the ongoing judgments of management.” — SEC Special Counsel Courtney Haseley.

Say what? Apparently, discussing the strategy of a company in which you have ownership is micromanaging? Saving the climate and determining the strategy sounds like macromanaging to me. I find it remarkable that the Republican party, always proud to reduce the government's influence, is interfering with the inherently democratic process of shareholder voting. Why is this happening?

In 2021, Follow-This is also planning to introduce climate resolutions to US-based company Chevron, where they previously focused on European companies. Corporate lawyers are already getting ready for battle, aiming again to refuse shareholder voting. Again, comparable arguments are used:

“By prescribing this strategy, the Proposal restricts the Company’s discretion to direct its GHG emissions management program. As discussed below, the Staff has concurred that proposals seeking to direct a company’s specific actions with respect to complex policy matters and restrict the discretion or flexibility of the company’s management or board to act on those matters may be excluded.”

I hope that Biden will make good on his promise to fight climate change. Let’s also hope that the newly appointed chairman of the SEC, Gary Gensler, will act decisively to prevent shareholder voting on climate action from being blocked.

How Biden is reversing Trump's assault on the environment.