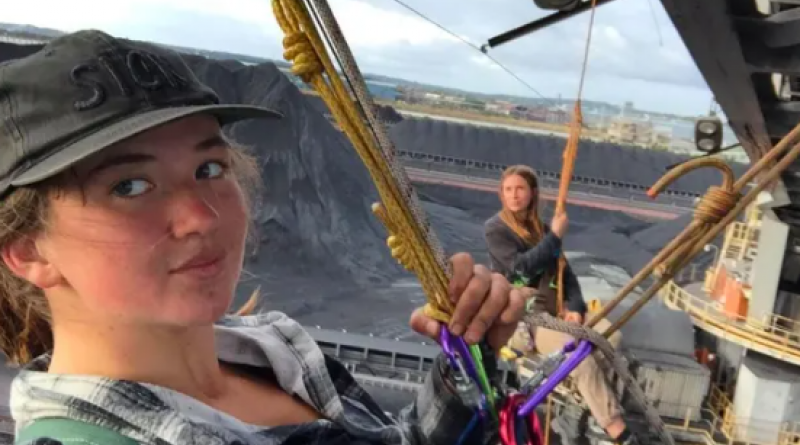 Climate activists have used their bodies, rope and glue as part of ‘destructive action’ to block part of the coal supply chain in the Hunter.

Two climate activists shut down activity at the world’s largest coal port on Wednesday morning by climbing on top of machinery at the Port of Newcastle and pressing an emergency safety button, bringing the export of coal to a standstill.

“As scary as [the police] might be, as scary as taking action which might ostracise you from certain communities might be, it’s not as scary as the future we are heading to,” one of the protesters, 21-year-old Hannah, said.

Over the past 10 days, a handful of climate activists have used their bodies, rope and glue as part of “destructive action” to block key bottlenecks in the multibillion-dollar coal supply chain in the Hunter, with politicians and police so far unable to stop them.

The NSW police commissioner, Mick Fuller, said protesters face jail sentences of up to 25 years, but activists who have already been charged over alleged offences last week are vowing to continue.

Home to the largest coal port in the world, the city of Newcastle and its surrounding Hunter region is an important chapter in Australia’s history of mining prosperity.

Protecting jobs in the region has also become a common excuse offered by politicians who have seen the nation become a notorious laggard on climate action.

The coalmining industry directly and indirectly employs up to 61,000 people in the Hunter, where the lush green landscape is dotted by open-cut coalmines and marked by a rail line that transported about 150m tonnes, or more than A$19bn, of coal to power plants in Australia and the world in 2020 alone.

Which is why a campaign being waged by the newly formed “Blockade Australia” has already been labelled as “nothing short of economic vandalism” by the New South Wales police minister, David Elliot.

The deputy prime minister, Barnaby Joyce, was furious with the protesters when he visited Singleton this week. Appearing at the train station as a coal load sped past, he claimed each train load of coal was worth about $1m in export value.

He said that by Monday the blockades had disrupted $60m in exports.

“If they’ve got other ways that this nation can earn money right now, then we’re all ears,” Joyce said. “[But] in the meantime, we’ve got to make a buck.

Even Matt Kean, the NSW treasurer and energy minister who has been vocal in his criticism of the federal government’s climate transition strategy, has lashed out at the disruptions, calling for police to “throw the book” at the protesters.

“Pull your heads in – get out of the way and stop hurting other people going about their lives, running their businesses,” Kean told Sydney radio 2GB on Wednesday.

“There are hundreds of ways to make your views known and advocate for change but risking the lives of rail workers is definitely not one of them.”

Faced with a backed up rail line into the port and a continuation of the activities that had resulted in the arrests of 17 protesters and disruption to $60m worth of coal exports, Fuller upped the ante, announcing the establishment of Strike Force Tuohy to target the activists on Monday.

He also warned protesters that he had received legal advice he could use an obscure charge relating to interfering with a railway with the intention of causing death or bodily harm, which carries a jail sentence of up to 25 years.

On Tuesday, two people were charged, who will now face the potential 25-year sentence.

Blockade participant Clancey Maher, who was arrested and is awaiting charges over a disruption last week, told Guardian Australia she is “fully committed to taking this kind of action again” despite the latest threats of harsher penalties.

At about 4.30pm last Friday, the 26-year-old climbed on to a railway bridge that runs across the Hunter River and into Newcastle port’s coal terminal on Kooragang Island, and tied rope to the tracks.

Maher, together with another protester, Tim Neville, then abseiled off the bridge, hanging about five metres above the river.

Trains could not pass, authorities were alerted and a police rescue boat drove underneath the pair as officers above lowered their ropes into the vessel.

While Maher was the first to be arrested, Neville kept rescuers occupied for considerably longer, having glued his hands to the bridge.

They stopped coal entering the port for about two-and-a-half hours.

While Neville has already appeared before court, receiving a criminal conviction and a $1,500 fine, Maher’s matter has been adjourned. She is not optimistic about the legal process she faces, saying she’s “got a history” related to previous climate protest activity.

Maher describes herself as a fulltime community organiser, and has previously been involved in protests at the Adani coalmine site.

In discussing the police operation, Fuller has said the protesters “are coming from other states and territories with particular expertise and they’re locking themselves on to these locomotives and tracks”.

Many of the protesters police have arrested have been from Victoria, and while Maher has spent time previously living in Newcastle, she is open about not being a local. She said protesters fund their own travel to the Hunter, and that the same will apply with future Blockade Australia events.

Regarding police concerns that the protesters are endangering all users of the rail line, not just workers on coal loads, Maher said this was an “expected line”, and that the participants themselves risked the most danger. “Trains are stopped with more than enough warning.”

She also said she doesn’t delight in the economic ramifications for the entire region that have infuriated politicians.

“We see it as the only way to be able to force necessary action. The alternative is less desirable.”

In statements sent to media, Blockade Australia doesn’t describe itself as a solely anti-coal group. Instead, it says it is “committed to taking the action necessary to disrupt economic bottlenecks of Australia and stop the exploitative colonial project”.