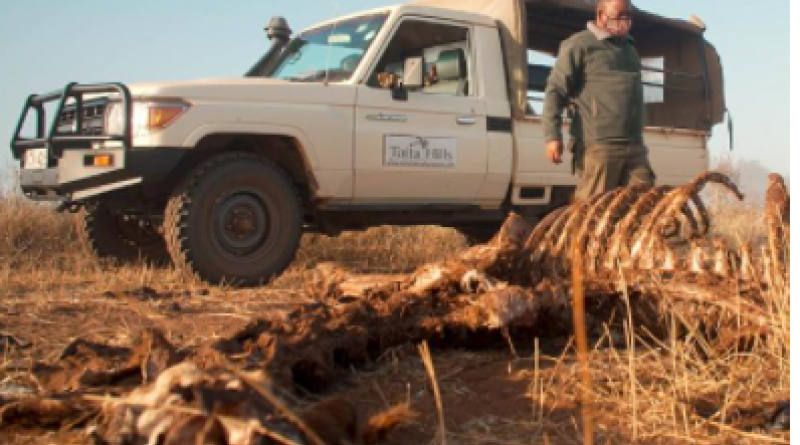 (CNN)Kenya's wide-open, postcard-perfect savannah is dotted with acacia trees in every direction as the early morning fog still clouds the air. Donart Mwakio is doing his rounds in a white pickup truck when it suddenly screeches to a halt. The ranger at Kenya's Taita Hills Wildlife Sanctuary hops out of the back and stands over an unusual-looking carcass.

The animal's massive ribcage is still mostly intact, while the impossibly long limbs and neck are strewn further into the long grass -- most still covered in pale yellow fur and the unmistakable brown spots of a giraffe.

Mwakio guesses it's been there about two weeks -- snared by poachers, and crudely butchered for its meat -- the rest left for birds and hyenas to pick through.

"A lot of meat. It weighs about one ton," he says.

The rangers carry out twice-daily patrols of the 42 square mile nature reserve near the southern tip of Kenya, about 125 miles inland from the coast. It's easy for poachers to get in and out from the sprawling village nearby.

"Currently the [poaching] situation is worse because most people have lost their jobs and they're resorting to poaching, as a way of earning their living," explains Mwakio.

It doesn't take long before the group of four rangers finds a snare hung between two trees bookending a well-worn animal path. The metal hoop is fashioned from a wire from the electric fence meant to keep poachers out.

In less than an hour, the rangers find two more homemade snares, the third attached to the leg of an eland, the world's largest antelope. The poachers didn't come back in time and now the stench of the rotting carcass in the scorching mid-morning sun is almost unbearable.

Brand new figures from the Kenya Wildlife Service (KWS) shared with CNN show that poaching is on the rise. Seizures of illegal bushmeat -- mostly common animals like zebras, elands, and dik diks (a deer-like antelope the size of a small dog) -- are set to hit a record high. 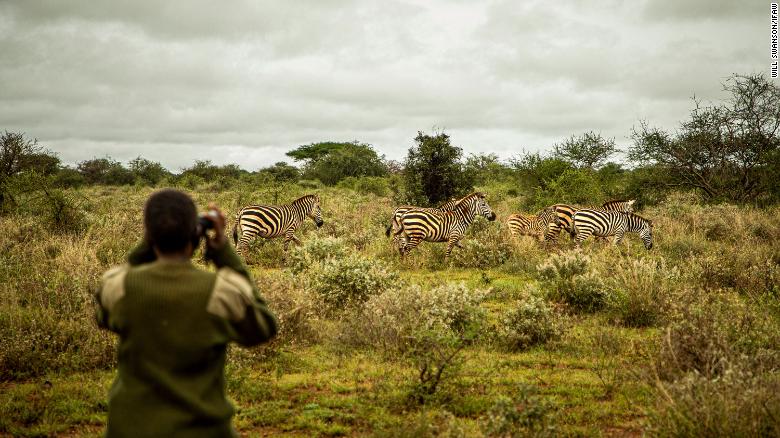 "The problem is not looking very good at the moment," explains KWS Director General John Migui Waweru. He says a lot of otherwise decent-paying job opportunities were lost during the pandemic. "So people found alternative ways of one surviving, and that is with subsistence, bushmeat hunting."

His office led a crackdown on bushmeat poaching in 2019, leading to a spike in seizures. The pandemic has only made things worse. "People are desperate," he says.

Willie Mwadilo is the general manager of the privately-owned wildlife sanctuary and the two hotels built on the remote site that was once owned by the Hilton group.

"Before the pandemic, things were good. I would say, everybody got something out of the tourists coming in," he says. The hotels were routinely booked at 90 or 100% capacity and even around 80% in the low season, according to Mwadilo.

The pandemic forced the closure of the sanctuary for three months forcing staff to take their annual leave en masse. Since then, the hotels didn't top 20% capacity until recently, when an influx of domestic tourists and eastern Europeans brought a slight uptick.

Mwadilo, who keeps a small pistol holstered on his waist, can often see the glow of flashlights on the horizon -- poachers. 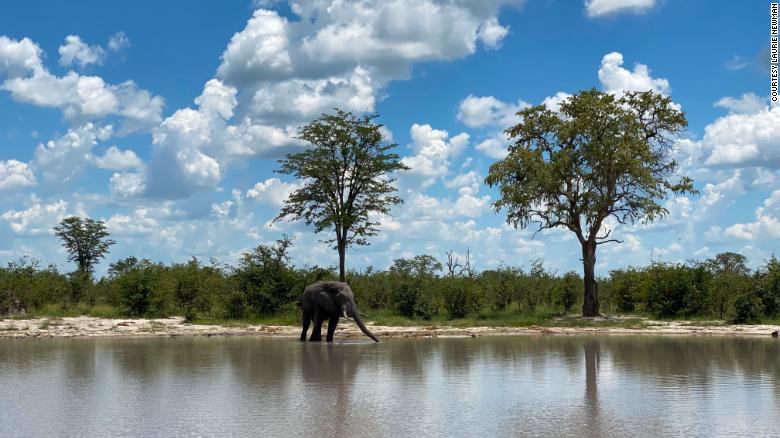 At night, a flashlight can so disorient and confuse an animal that poachers can easily take the opportunity to slash the animal with a machete, butcher it on the spot, and take the meat out in bags tied down to the back of a motorbike -- no snares required.

Sometimes, Mwadilo says he fires into the air in a futile attempt to scare them off. He hardly can blame them though, he says.

Poverty, the rule, not the exception

The village of Mwashuma lies just off the road that connects the hotels to the main highway.

Christopher Mwasi, an elder -- takes us for a short tour, past the clay-bricked, tin-roofed homes and the basic mud huts.

Poverty here is the rule, not the exception.

"Corona [virus] has exacerbated the situation. Initially, there were jobs, but now there are no jobs," says Mwasi.

He says he doesn't know any poachers in his village, but they operate in secret.

He acknowledges, though, that when young men with motorbikes are called by poachers, they come to transport the meat.

"If you don't take care of people, they will eat the animals. But if they are employed, they eat to their satisfaction, they will not be involved in poaching," he says.

The village was struggling even before the pandemic -- and now, many people say they don't know where their next meal will come from.

Ibrahim Chombo is Mwasi's cousin and lives in a clay brick house with dirt floors and no electricity. 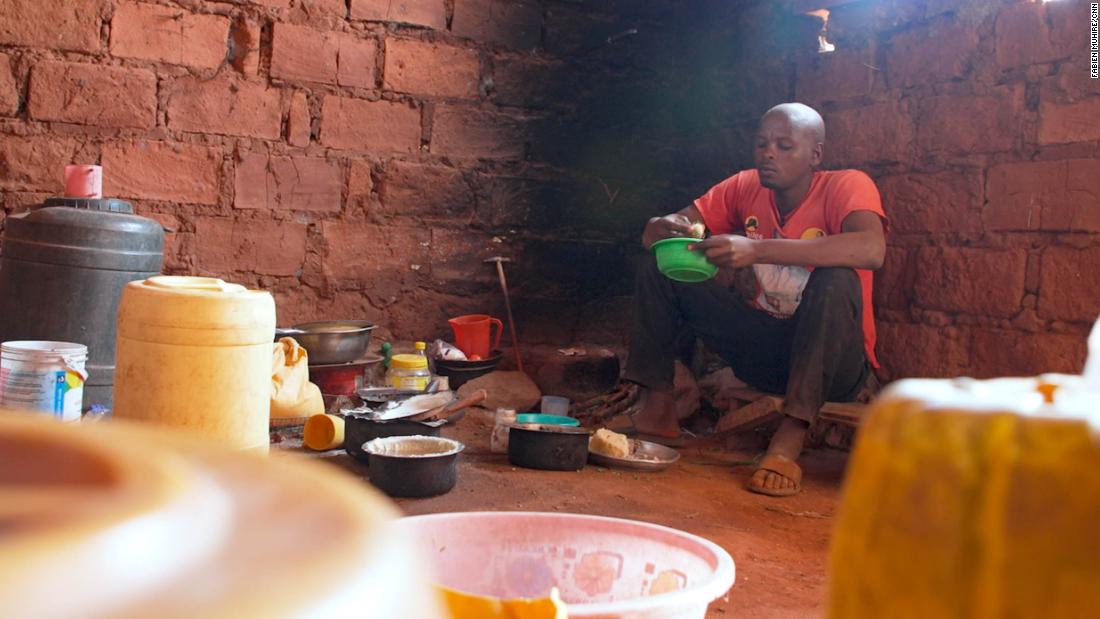 Chombo works any odd job he can find to provide for his wife and two young children. Lately, though, it's been a struggle to earn the 800 shillings ($7.28) per day he needs to ensure his family has enough to eat.

"They have become weak because there is nothing to eat," he says. "They don't complain, they know, when the parents get money, they will have something to eat."

He says pre-pandemic, finding odd jobs was easy, but not anymore. On this day, Chombo found work digging a latrine -- he gets 150 shillings ($1.37) for every foot he digs. That morning, it took him more than 5 hours to dig 3 feet. He planned to go back in the afternoon to keep digging. Poaching would undoubtedly bring much easier money, but he can't afford to take the risk.

"If I am arrested, who will help my family to get food?" he asks.

He can't afford to buy beef from the butcher, but says sometimes if he has a bit of money, he can afford to buy bushmeat instead, which sells for a quarter of the price, or less.

Just down the road from Mwashuma is the larger village of Bura.

"Before corona, there were so many customers and supply," says butcher Gabriel Mradai who sells meat on commission.

The business previously supplied local schools and hotels. But that business has dried up. There's just one kilo of beef in the case, where he used to have 25 kilograms.

Almost no one can afford beef, and even if they could, bushmeat is a fraction of the price. Now Mradai says his kids, who are one and three, are going hungry.

"They eat, but I struggle, I struggle to get food," he says.

The assistant chief of the local government, Sylvester Chombo Mwavula is well aware that many people in his community don't have enough to eat.

But, he says, that doesn't excuse poaching.

"Sometimes you may arrest somebody and actually when you visit his house, you'll find that the person is living in a very pathetic homestead. But, you see, we have to follow the law," he says.

If you ask around, bushmeat is not hard to find. One young man who sells the poached bushmeat spoke to CNN on the condition of anonymity.

He says when the pandemic hit, he traded his struggling small farm for a rented motorbike. The trouble is, too many other young men had the same idea. There aren't enough paying passengers to make any money. He says he doesn't hunt, but like many young men with motorbikes, he's a middleman between the poachers and the market.

"Because I have a need of money, I had to take care of my family and pay the rent for the bike. So I have to take the risk to go back to the bush," he says.

"We need employment, that's the big issue because if most of the poachers are employed by the hotel, they can protect the animals. They cannot destroy the animals. But they are not employed." 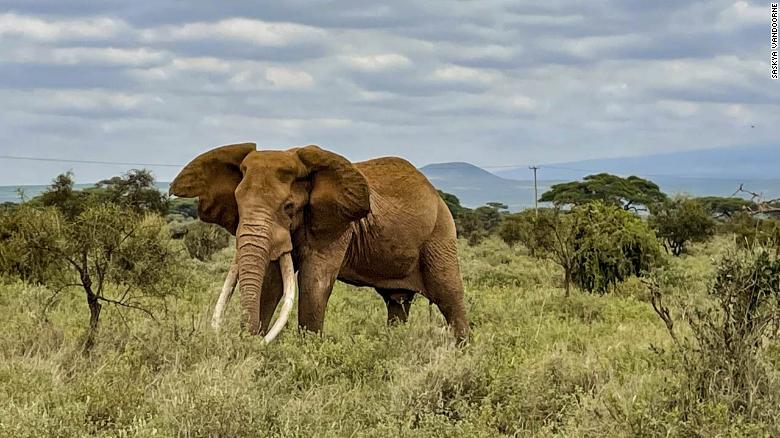 On his motorbike, he led us down a winding, bumpy backroad to the home of a poacher, who also agreed to speak anonymously.

When we arrive, he is busy inside of his shabby dwelling smoking some of his meat so it keeps for longer without refrigeration. He has no electricity or water.

He says he was poaching long before the pandemic struck -- dik diks and elands are his primary targets.

"We use flashlights, when you point the light at the animal at night it loses its vision, then you hit it... with a machete."

"I like wild animals, I can rear them, it is not my wish to be a poacher," he says.

Back at the safari lodge, Mwadilo has introduced us to a man who was once a thorn in his side. John Paul Walela, 58, who renamed himself 'Jesus 2' after Christianity's messiah, says he began poaching when he was orphaned as a teen as a means of survival.

In 2019, he was released from jail after 16 months. It was his seventh poaching conviction, and now he says, his last. He's spent almost a quarter of his life behind bars.

"I have hope, my star is still shining," he beams.

Jesus' story illustrates the challenge facing Kenyan conservationists. For most poachers, the only deterrent is the risk of jail.

Waweru, the KWS Director General is optimistic that his agency's efforts can cut down on poaching. He's focused on shutting down the markets selling bushmeat by testing the meat being sold to determine what animal it comes from. His rangers are also out patrolling national parks and de-snaring poaching hotspots.

"It doesn't solve the root of the problem. We must educate them... why bushmeat is not the alternative," he says.