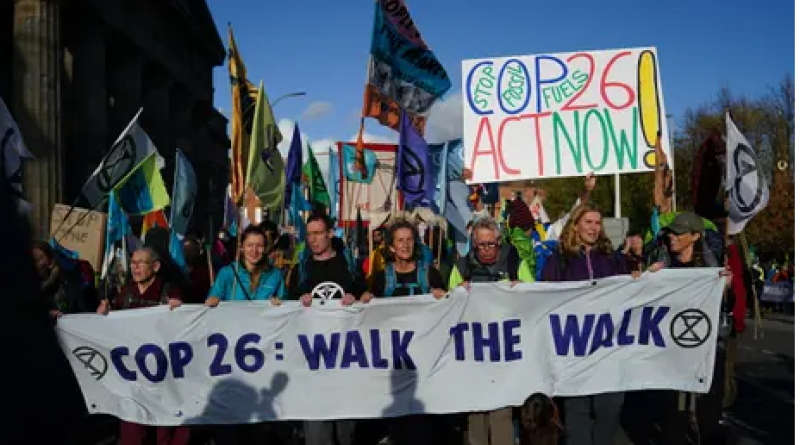 Conference president, Alok Sharma, says countries must agree on how to tackle crisis

Alok Sharma, the president of the Cop26 climate summit, has called on global leaders to “banish ghosts of the past” and step up with new pledges to lower emissions as the world is running out of time to keep warming below 1.5C.

As leaders prepared to fly in for the conference in Glasgow, Sharma could not say with certainty that the two-week event would end with a deal to keep that prospect alive. As host nation, the UK is responsible for overseeing the negotiations and trying to extract meaningful pledges from the representatives of almost 200 countries in attendance.

Sharma, a former UK business secretary, told Sky News’s Trevor Phillips: “That is what I’m driving towards and I think what I’ve always said is what we need to come out of Glasgow is saying with credibility that we have kept 1.5C alive. That 1.5C really matters.

“We know from the IPCC [the Intergovernmental Panel on Climate Change] that we are already at global warming of 1.1C above pre-industrial levels.

“At 1.5C, there will be countries in the world that will be under water and that’s why we need to get an agreement here on how we tackle climate change over the next decade.”

An overheated world would lead to calamitous rises in sea levels, heatwaves of increasing intensity and droughts of lengthening duration that would leave tens of millions of people without homes or food.

Delegates from almost 200 countries will be involved in hammering out an agreement to prevent such scenarios – though climate experts have warned they have very little room or time for manoeuvre. Global average temperatures have already risen by 1.1C since the Industrial Revolution and only stringent emission cuts will prevent that increase from topping 1.5C.

However, developing nations – infuriated by the UK’s recent foreign aid cuts – are expected to clash with richer countries over the funding that the former say they should be given to help them introduce the green technologies needed to replace their coal- and oil-burning power stations.

At the same time, Arab states want to continue drilling for oil for as long as possible, while Pacific island states – who could soon be wiped out by swiftly rising sea levels – are seeking a rapid halt to the extraction of all fossil fuels. It will be the task of Boris Johnson and Sharma to ensure an agreement among these competing groups.

In a round of broadcast interviews, Sharma said all countries, particularly G20 ones, needed to do better on lowering emissions, when asked whether China and India in particular should be doing more.
In relation to the UK, he would not explicitly back the suggestion of George Eustice, the environment secretary, that there could be taxes on meat to reduce consumption. He said “on a personal level I believe in carrot rather than stick”.

Asked about the UK’s credibility on tackling the climate crisis if a new oilfield at Cambo to the west of the Shetland Islands is given consent, Sharma said experts had recognised that even a net zero economy would need some oil and gas supply.

However, the Cop26 president said the country would have to “wait and see” whether the oilfield is approved.

With the UK due to host 120 national leaders in Glasgow for a two-day event at the start of the summit, there have been worries that fractious diplomatic relations between Britain and France over fishing rights could derail progress.

Speaking from the G20 meeting in Rome ahead of the conference, the UK prime minister said the summit would be “the world’s moment of truth” and could mark “the beginning of the end of climate change”. Johnson added: “The question everyone is asking is whether we seize this moment or let it slip away.”