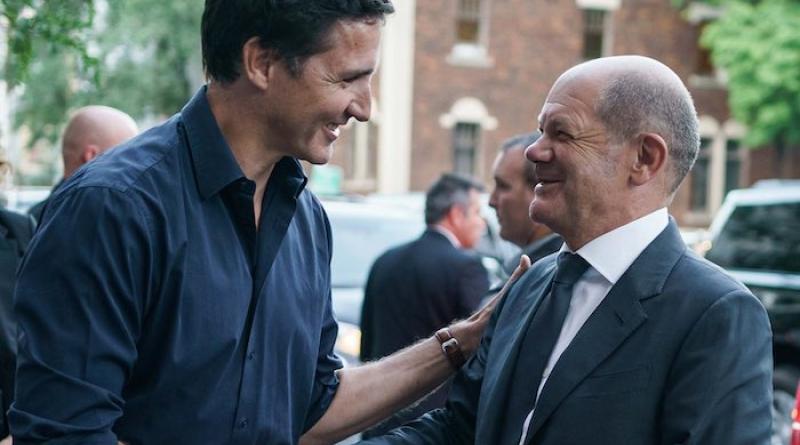 An energy pact between Canada and Germany expected to be signed this week in Newfoundland and Labrador will set aggressive timelines and targets for exporting hydrogen to Germany, Natural Resources Minister Jonathan Wilkinson said Friday.

While Germany’s preference is for “green hydrogen produced from water with renewable power sources that has a very low carbon footprint, Wilkinson said he’s not ruling out involving “blue” hydrogen made from natural gas using carbon capture and storage to trap emissions, The Canadian Press reports. That’s three months after a senior official at the German embassy in Ottawa categorically rejected any notion that his country would accept hydrogen derived from fossil fuels.

“When we say hydrogen, we mean ‘green’ hydrogen,” Deputy Head of Mission Gerhard Schlaudraff told The Energy Mix in mid-May. “The Canadian side, for very good reason, prefers to talk about ‘clean’ hydrogen. The situation in Canada is different, and we appreciate that.” But “if you look at the opportunities for Canada to export hydrogen to Europe, it is simply green hydrogen made from water and electrolysis, because of the huge potential of renewables in Canada.”

Wilkinson said Canadians should also expect announcements related to the role Canada can play in exporting critical minerals that are needed in the technology that produces hydrogen, CP says.

Hydrogen Up, LNG Down

German Chancellor Olaf Scholz arrived in Canada yesterday for a three-day, his first since he took over from longtime chancellor Angela Merkel last December. Over the last week, the declared focus of the visit has shifted dramatically, from earlier discussions and messaging around liquefied natural gas (LNG) exports to a more future-oriented emphasis on hydrogen.

Last Monday, The Mix reported exclusively that prospects for an LNG import-export deal between the two countries were close to evaporating, after the Germany government and the Canadian Prime Minister’s Office issued itineraries for the two leaders that made no mention of gas. On Thursday, the Globe and Mail confirmed that “prospects for a rapid expansion of liquefied natural gas exports from Canada will not be a topic of discussion.” A day later, the Globe cited German utility Uniper’s announcement that a 20-year supply contract with Pieridae Energy’s deeply troubled Goldboro LNG export facility in Nova Scotia “no longer plays a significant role“ in its plans.

Instead, the chancellor’s trip will take him first to Montreal and then Toronto before he and Prime Minister Justin Trudeau take off for the western Newfoundland port town of Stephenville, CP writes. It is home to a planned “green hydrogen” production facility, and it is there the two leaders will formally sign a Canada-German energy agreement that has been months in the making.

“The agreement will be, as you will see, something that essentially sets the framework for collaboration going forward,” Wilkinson told CP Friday.

“But it will set some targets in terms of timelines around when we would like to see actual product moving from Canada to Germany, and both will be pretty aggressive.”

He said the two countries will pledge to work with the private sector to meet those targets.

Canada was initiating talks with many countries, including Germany, about clean energy exports before the Russian invasion of Ukraine in February. But that invasion “has changed everything for Europe and further energy security,” Trudeau said Friday, during a news conference in Îles-de-la-Madeleine, Quebec.

Canada has been looking at what it can do help quickly to ease Germany’s reliance on Russian oil and gas. But Trudeau said the realistic short-term possibilities are limited, and the talks with Germany are playing a longer game to cut reliance on Russia and fossil fuels in general.

“How can we make sure that this illegal Russian invasion and the unreliability of Russia as an energy partner, actually incites and allows us all to pivot, not just off Russian oil and gas more quickly, but to pivot off oil and gas as something we rely on so much,” he said.

Canada’s hydrogen strategy, developed in 2020, seeks to make the country one of the world’s top three hydrogen exporters within 30 years. At the moment, the International Renewable Energy Agency doesn’t include Canada on its list of the six places most likely to become hydrogen superpowers.

Wilkinson said getting on that list will require being focused and fast on doing everything it takes to help industry ramp up. And he said that’s not only about exports.

“I would say that one has to start by thinking about domestic uses of hydrogen,” he said.

The Colours of Hydrogen

Constantin Zerger, head of energy and climate protection at Environmental Action Germany, said in a panel discussion Thursday that Germany is ramping up its own hydrogen production but will need significant imports to meet the targets in its climate strategy, particularly after 2030.

German research firm Fraunhofer said in a recent report that demand will almost double by 2030 and more than triple by 2040. By 2050, the country’s need could be seven to 14 times bigger than its current production.

But Zerger and other climate activists don’t want the Canada-Germany agreement to allow room for “blue” hydrogen produced from natural gas, even if carbon capture and storage technology is used to trap the accompanying greenhouse gas emissions. Zerger said Germany needs to be clear that it only wants green hydrogen, the kind that comes from using electrolysis to split apart water molecules.

The German government is also more interested in green hydrogen, though it isn’t closing the door to blue, CP says. Three months ago, the German embassy’s Gerhard Schlaudraff stressed that “the German funding instruments for the hydrogen economy are all geared toward green hydrogen.”

Wilkinson said the colour labels are a “pet peeve,” and what matters is the total carbon intensity.

“So Germany has had a preference, an express preference for hydrogen that comes from renewable,” he acknowledged.

“My argument with the Germans and with everybody else is, let’s change the nature of the conversation to one that focuses on the carbon intensity of the hydrogen. And it may well be that some countries have a preference for hydrogen that’s derived from one pathway or another but at the end of the day, if you can produce hydrogen that has zero or virtually zero carbon emissions, I mean, from my perspective, who cares where it comes from?”

• As recently as last year, scientists warned that unmeasured emissions of methane, a climate super-pollutant with about 85 times the warming potential of carbon dioxide over a 20-year span, would undercut efforts to position “blue” hydrogen as a low- or zero-carbon option.

• Then in December, an analysis found that the plummeting cost of solar- and wind-generated electricity could “substantially erode” the value of combining hydrogen production from fossil gas with carbon capture and storage.

The main body of this report was first published by The Canadian Press on August 19, 2022.

Full Story: The Canadian Press @CdnPressNews with files from The Energy Mix