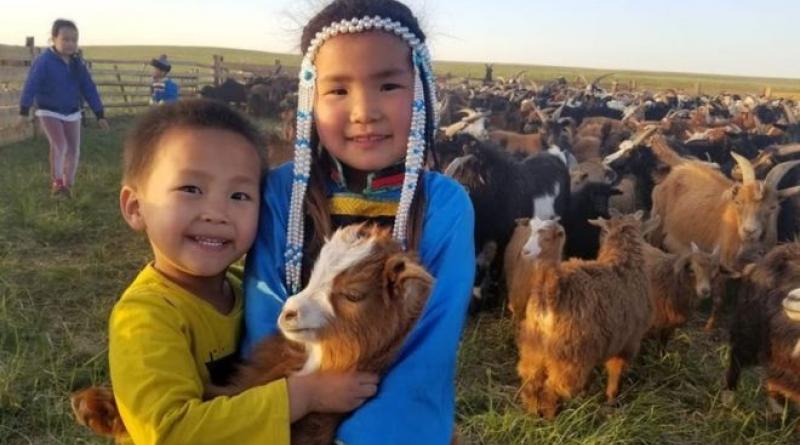 Mongolia's vast grasslands cover about three-quarters of the country, where nomadic herdsmen have maintained traditions stretching back centuries. But this world is changing - fast.

About 70% of this once verdant land has now been damaged, mostly due to overgrazing. The main culprit is the country's estimated 27 million cashmere goats, which are farmed for their highly-prized wool.

Unlike the country's 31 million sheep, the goats dig out and eat the roots of the grass, making re-growth much harder.

Add climate change on top, and the United Nations warns that a quarter of Mongolia's grasslands have now turned to desert. The nation is, in fact, particularly vulnerable to rising temperatures, with a 2C increase over the past 70 years, higher than the world average.

"When I was child, I vividly remember the grasses would grow taller, and we would receive more rain," says Batmunkh, a herder in the Dornod province. He looks after 1,000 animals, 300 of which are cashmere goats.

The dilemma for Mongolia is that with global demand for cashmere continuing to rise strongly, how can the country earn more money from selling it, at the same time as reducing the industry's environmental impact?

Since Mongolia's peaceful transition from communism to democracy in 1990, the number of goats in the country have soared. Between 1999 and 2019 numbers increased almost fourfold from seven million to today's 27 million.

They are looked after by 1.2 million nomadic herders, some 40% of the country's population.

Once a rare luxury, fashion items made from cashmere are now readily available from most High Street and online fashion retailers in the UK, US and other developed countries. With global prices having risen more than 60% since the 1980s, the world cashmere clothing market was valued at $2.5bn (£2bn) in 2018, according to a UN report. This is projected to reach $3.5bn by the end of 2025.

Mongolia is the world's second-largest producer of raw cashmere after China, accounting for approximately a fifth of global supply. It is the country's third-largest export after copper and gold, and the total amount produced has risen sharply in recent years.

But while the country's cashmere is considered by many people to be the highest quality, much of it ends up in China where it is blended with Chinese wool. For a jumper, about four goats are needed, and last year's average price was 130,000 Mongolian tugriks ($47; £36) per kilo.

"It is very unfortunate that our own cashmere cannot be proudly sold on a global market as Mongolian cashmere," says Batmunkh. "Whatever we produce is being mixed up in China with other cashmere."

About 90% of Mongolian raw cashmere production is currently sold to Chinese brokers, who usually sell on to Chinese-owned processing companies in Mongolia, says Zara Morris-Trainor, an associate consultant at the Sustainable Fibre Alliance. The organisation works with brands such as Burberry, J Crew and M&S.

These Chinese processing companies typically wash and scour the raw cashmere, before exporting it to China for further processing and production of garments.

The hope of both the Mongolian government and the UN is that overgrazing can be reduced, and prices increased, by two initiatives. The first is by introducing a new system of traceability, and the second is by opening more plants in Ulaanbaatar that can do the entire processing work, so that the finished wool can be sold for a "made in Mongolia" premium.

To better ensure traceability, Batmunkh is now involved in a pilot initiative that uses blockchain technology - made famous as the tech behind the cryptocurrency bitcoin - to follow cashmere from the goats to new processing facilities in the capital, Ulaanbaatar.

Herders use a mobile phone app to register cashmere bales and attach a tracking tag.

The app was created by Toronto-based Convergence Tech, which is working with the UN in three provinces in north-east Mongolia. The idea is to limit production from overgrazed areas.

Chami Akeemana, the firm's chief executive, hopes it will provide traceability and authenticity. "There is very little transparency at present because of the chaos of the raw materials market, which is clouded by middlemen and market aggregators," he says.

However, Dr Troy Sternberg, an expert on Mongolia at Oxford University's School of Geography and the Environment, urges caution. He says that the tagging does not cover the whole supply, but typically only up to the first processing facility. Nor does he rule out people just removing tags and relabeling the cashmere.

He says it would be helpful if the big fashion brands got behind promoting more environmentally friendly cashmere.

"It'll be a challenge to roll out the tags over such a vast country," says Dr Sternberg. "But if brands worked harder to establish a Mongolian quality cashmere, like coffee sourcing in Colombia, that could really impact the herders and the grasslands."

Regarding building more cashmere processing plants in Ulaanbaatar, the Mongolian National Chamber of Commerce and Industry is now working with private sector partners.

Batmunkh is hoping that the two initiatives will be successful, despite the background problem of climate change.

"I do find the climate changing," he says. "And as nomads we heavily depend on nature."

The current lack of grass means that he has to buy more fodder for his goats, and overall he remains fearful for the long term future of the industry in Mongolia. The hotter weather also means that the goats produce wool of a lesser quality, as they grow fewer of the tightly packed fine fibres needed for them to keep warm during the winter months.

"I try to send all my kids to school with the money I make from selling cashmere," he says, which would give them a route out of the nomadic life.

"I am quite torn to think that our knowledge and heritage from our ancestors will die with us. On the other hand, I don't want to leave my children to risks and uncertainties."

Mongolia: A toxic warning to the world.

A nomadic family that lives on solar energy!