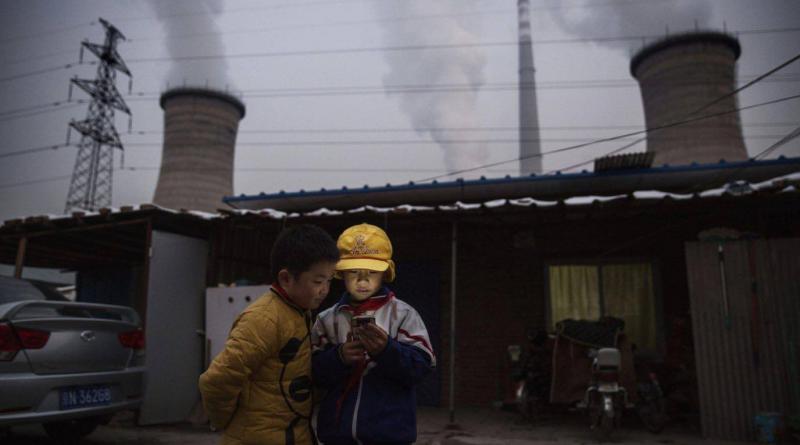 China’s thermal electricity consumption continues to grow and China continues to invest heavily in new coal generation, even as it also pursues wind, solar and electric vehicles. A bit like Queensland, really, except that China, with around 20GW of new coal generation just entering production or actively under construction in 2020, absolutely dwarfs the world.

Despite some investment bank recommendations, the sector has abysmal share market performance. Profits in the June half grew very strongly despite flat prices and falling volumes because coal prices fell sharply.

Capacity utilisation of the coal fleet is about 50% and fell below that in the June half due to Covid, but thermal electricity production in China is now growing at about a 6% year-on-year pace.

China produced coal is selling for about $A120/t, about a 50% premium to same quality imported coal and production is basically flat. The large IPPs are investing in wind and solar at about the same rate they are investing in coal generation but overall there is zero sense that China is making any serious decarbonisation effort in electricity production, even though China is by far the largest incremental contributor to global warming.

Just a reminder about where we are with global warming: July 2020 at 0.92°C above the 20th Century average for July was equal second warmest July on record (for last 200 years). Nine of the 10 warmest Julys on record have been since 2010. 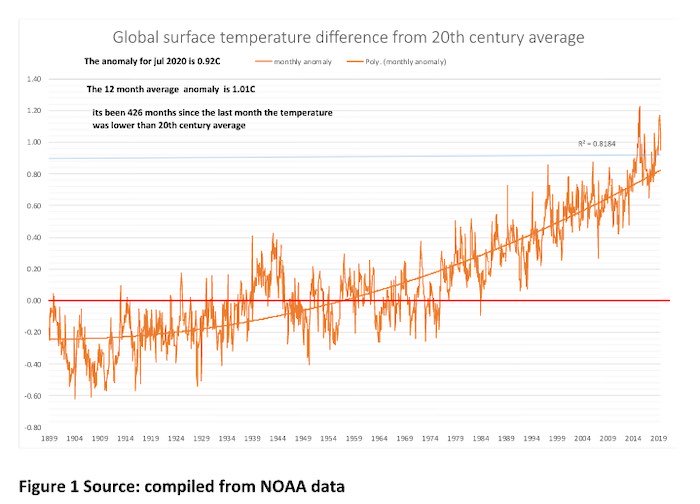 Since China is by far the largest marginal contributor to global warming, and since China is massively important in Australia’s coal and gas markets, as well as producing most of the world’s solar panels and many of its wind turbines, keeping an eye on it is important. However data are patchy, politics impossible to an outsider, and things are rarely what they seem. So tread carefully. 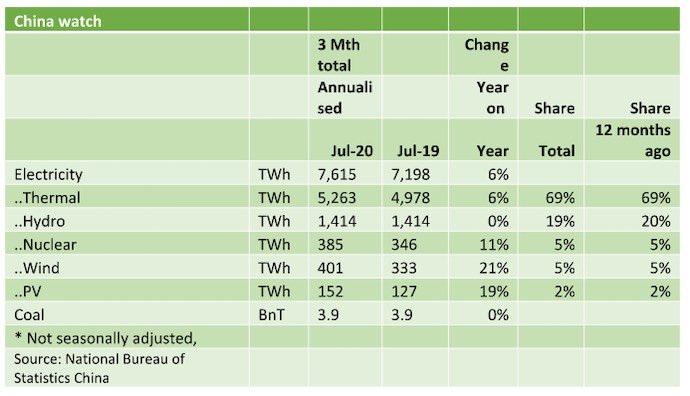 Thermal electricity – and there is a bit extra gas in the mix, and the efficiency of the coal generation has increased – has just shown slightly less growth than overall electricity production: 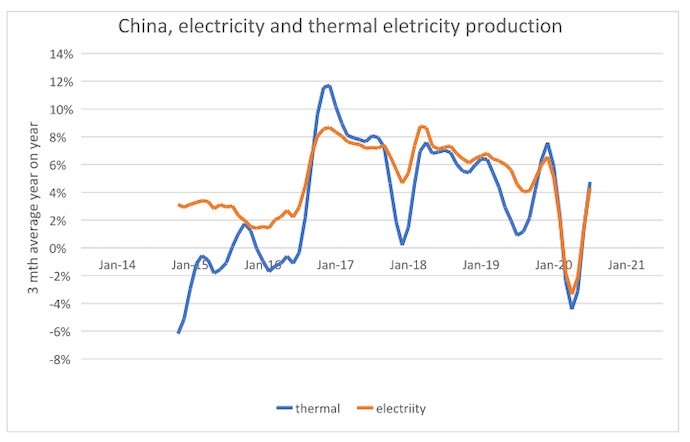 Compared to July 2014, the three-month rolling annualised total of thermal electricity production is up 25% and for electricity overall 35%. From a global warming perspective, all we care about is the 25% increase in thermal, less allowance for improved efficiency and extra gas in the mix.

New plants but no new demand

It’s pretty well known that there are many new coal-fired generators either proposed or under construction in China. As those of us who look at the data from afar frequently wonder, the question is how any of them will ever earn a return on capital.

According to Endcoal, arguably the world’s most reliable statistician when it comes to coal electricity generation capacity changes, China has started fresh (>6000) or resumed (>6000) more than 12,000MW of coal-fuelled generation, completely dominating world construction. By contrast, neither – and I would not even joke about using the phrase – of the two great white hopes of the coal industry, India and Vietnam, started so much as 1MW in the seven months ended July 2020. 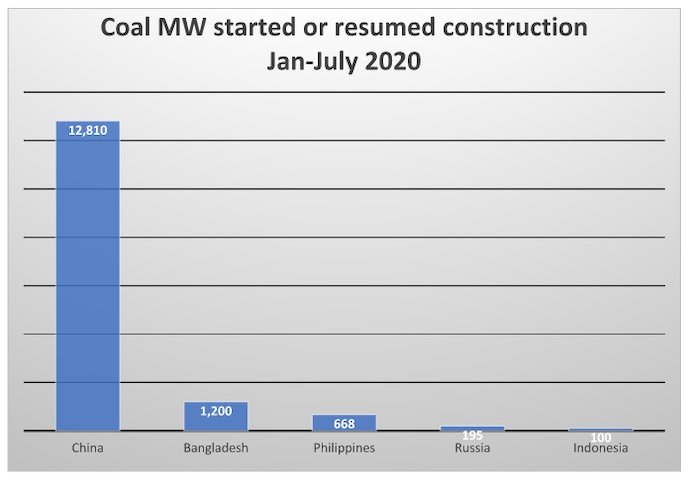 If China wants to give itself a worse international image than it already has its going about it the right way. Equally, India showed a net reduction in newly commissioned net capacity so far in 2020, although that’s not shown in the next figure, which again puts China as the very dominant “F** the environment” player. 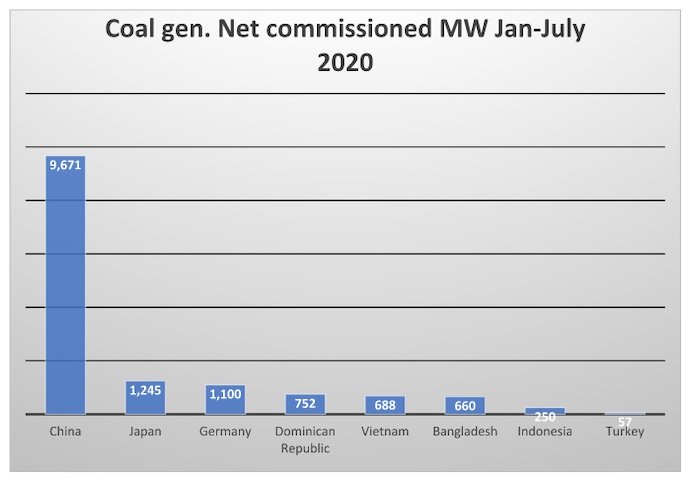 You can argue that these are all high-efficiency coal MW and will, one way or another, push out lower efficiency units until your blue in the face, but it won’t change the overall disaster. The point environmentalists make is it’s not just an environmental disaster, it seems – from the outside – like financial kamikaze, if I can use a Japanese term to talk about China business. Perhaps Sepukku would be better, notwithstanding that Confucius would not approve.

Let’s look at some numbers, arguably as useful as a sports grant spreadsheet.

So basically investors, including the government owners, have lost, on paper, say $A35 billion from this expansion strategy in the past five years. A drop in the ocean really, probably less than the humble Aussie government will drop on the submarines.

Some brokers are positive on the Chinese IPPs looking at the cheap valuations and big dividend yields. Huadian, which provides by far the most useful commentary, noted that secondary industry electricity in the June half was down 2.5% on PCP and household consumption up 6.6%. Overall consumption was down 1.3%, but as Fig 1 shows, that was due to the March quarter. By June, we are back to 6% growth.

As a reminder, these companies are big and heavily indebted. These financials are for calendar 2019: 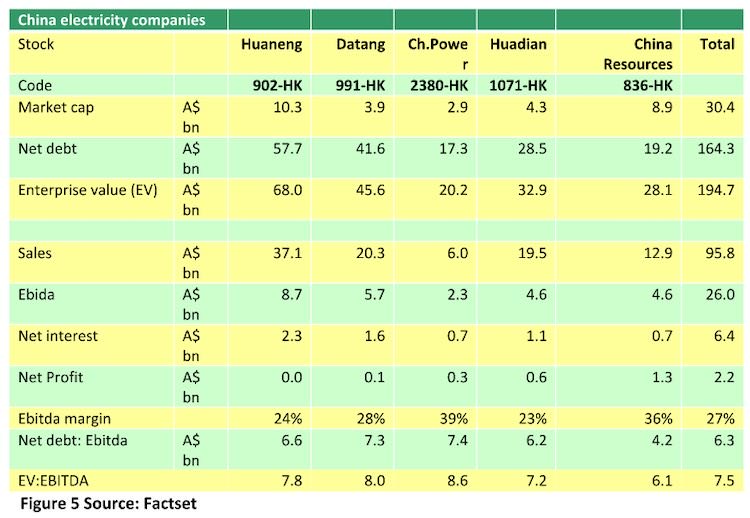 And as Huaneng is the largest here’s its 2020 H1 P&L showing how the reduction in fuel costs has lifted profit 65%, and actually the annualised return on equity was a not too shabby 11%. Net profit is helped by the low interest rate.

Capacity utilisation was an amazingly low 1718 hours, which annualised out to 39% from an equity generation based capacity of 94GW, of which Huaneng’s version of clean (gas , hydro, wind, pv, biomass) was 18%. Electricity sold by Huaneng was 172TWh. Labour costs continued to grow at a rapid pace.

Sector volumes down, prices flat, coal cost down, profits up

Unfortunately, half-yearly disclosures by the big Chinese IPPs [Independent Power Producers] in English are less useful than the full-year disclosures. In particular, only some of the IPPs have disclosed “on grid” tariffs and fuel costs.

As a general statement, sales volumes of all the big IPPs were down a touch on PCP. Prices were flat, or a touch down, and in the 330-416 RMB range which corresponds to $A65-$A83/MWh – quite similar to Australian prices.

Two companies, China Power International and Huadian, reported the operating hours (capacity utilisation) of their coal plants at around 1830 hours. That equates to capacity utilization of 48%, but the full-year number will be better as Covid impacts fall off.

Still, coal generation in China, generally, has capacity utilisation of around 50% and it is not easy to understand why the industry needs to build more capacity.

Fuel costs were down generally 10% to 20% and Huaneng’s fuel cost worked to $A41/MWh and China Power International to $A39.4. We see those numbers as higher than for Australian coal generators, although maybe not by much.

Equally, it’s likely that average Chinese delivered-to-power-station, locally-produced coal has higher costs than imported coal of the same quality. Most, or at least much of the new coal generation capacity is being constructed in Inner Mongolia, far from the major population centres, but this raises the final cost of electricity as the product then has to be shipped back to the East and the South. Inner Mongolia is the second-largest coal region in China.

“… In terms of the coal market, China has continuously strengthened macro-control of the coal industry, increased the reduction of production capacity in major coal mines, and accelerated the concentration of resources in Shanxi, Inner Mongolia and Shaanxi and in leading enterprises by virtue of industry merger and restructuring and replacement of production capacity. The increasing proportion of long-distance electricity-coal transportation between regions, and the vulnerability of coal transportation to extreme weather and geological disasters along the railway lines have caused corresponding greater impacts on the coal market.

*David Leitch is a regular contributor to Renew Economy. He is principal at ITK, specialising in analysis of electricity, gas and decarbonisation drawn from 33 years experience in stockbroking research & analysis for UBS, JPMorgan and predecessor firms.

Air pollution in China back to pre-Covid levels and Europe may follow.