Is civil disobedience OK if it’s the only way to prevent climate catastrophe? 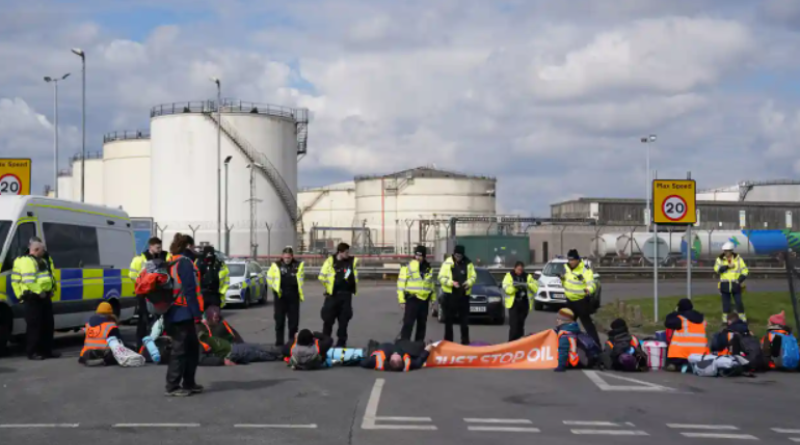 This week, climate activists disrupted the UK’s oil supply, because they believe they face a desperate choice. Nonviolent resistance now, or the unthinkable violence of climate change later.

“There is a need to break the law,” says Just Stop Oil’s Melissa Carrington, “so we are not guilty of greater crime.” But is she right?

In so-called liberal democracies, we have a default obligation to obey the law. It’s a moral duty, as well as a legal one. It’s part of our implicit contract with the government we elected,which provides us, in return, with the protection of justice. But what happens when that government doesn’t keep its side of the bargain?

Then, according to numerous political thinkers, we not only can, but very possibly should, break some laws: peacefully, publicly and on principle. The aim? To bring policy into line with what justice actually requires.

Henry David Thoreau gave this a name: civil disobedience. John Rawls, as pivotal a social contract thinker as you are likely to find, thought it could be good for social stability and justice, so long as it challenged longstanding, serious injustice. And what could be more unjust than supporting an industry that kills people?

We can be more or less controversial here. Is civil disobedience morally OK because governments aren’t progressive enough when it comes to protecting non-humans? Because they allow sentient animals to be tortured in factory farms, or 30% of species to be wiped out by the climate crisis? Some philosophers, such as Peter Singer, think so. Our fellow animals, they say, are entitled to political consideration even though they can’t participate in democratic decision-making.

Others point out, less provocatively, that although a government is mainly answerable to those living within its own borders, it still owes basic justice to other humans. It shouldn’t give them encephalitis or dengue fever, or starve them to death.

There are grounds for disobedience even if we think only about what governments should and shouldn’t do to their own citizens. The climate crisis threatens our children and grandchildren with heatwaves, floods, wildfires, and untold mental anguish. By propping up the fossil fuel industry, our government puts their whole future in jeopardy. If that’s not a serious injustice, I’m not sure what is.

Then there’s environmental resistance. Rather than grabbing attention through general disruption, the activists aim to prevent injustice, directly. “This isn’t like sitting in the middle of random roads,” says Zak, a 15-year-old activist who was arrested as part of the Just Stop Oil protests. “As well as saying to the government, ‘We are demanding no new oil and gas extraction in the North Sea’, it is also stopping the gears of production.”

Is this better, or worse? The philosophers Ten-Herng Lai and Chong-Ming Lim think it’s fairer to inconvenience oil and gas giants than the general public, because they’re the ones doing the harm. Or think about it like this. If activists focus on preventing states from extracting oil or natural gas, they might do something else as well: challenge government overreach.

“Some philosophers question whether territorial rights should extend to underground natural resources,” says Megan Blomfield, a senior lecturer at the University of Sheffield, “since it’s not like anybody did anything to put them there. And where the resource is scarce or its use can harm other people, there’s additional reason to question any entitlement for the state to do what it likes with it.”

Of course, caveats remain. Is this mass law-breaking a last resort? It looks like it. The Intergovernmental Panel on Climate Change has been issuing warnings for 32 years now, but states’ commitments to cut greenhouse gas emissions fall abysmally short of limiting global warming to 1.5C. Actual policies put us on track for a terrifying 2.7C increase by 2100, and the UK shows no sign of doing its fair share.

And will it work? It might, if the numbers are right. “We’ve seen through history that the only way mass change is achieved is through these mass campaigns like the women’s suffrage or the civil rights movements,” says Zak.

It makes sense to diversify tactics. Just activism should be inclusive, and risking arrest is only a viable strategy for the comparatively privileged, not those already at the receiving end of police intimidation. There’s also evidence that successful movements use a range of approaches, from lobbying and voting to strikes and, yes, civil disobedience.

But social scientists Maria Stephan and Erica Chenoweth studied major resistance campaigns between 1900 and 2006 and found that the nonviolent ones succeeded more than half the time. (More than twice as often, incidentally, as the violent ones.) The key to success? The so-called “3.5% rule”, because that’s the proportion of the population that needs to get involved.

And here’s something else to bear in mind. These movements also challenge participatory injustice, where those with most at stake are excluded from decision-making. Many climate protesters are too young to vote. They are denied a voice in determining their own future, while politicians accept gifts worth millions from climate sceptics and fossil fuel interests. Through activism, including civil disobedience, they demand to be heard.

When future generations look back on this period, as we look back on earlier epoch-defining campaigns, they’ll ask who showed more respect for justice and democracy: the activists so many of us find disruptive, or the governments they are trying to reform. I think we know what their answer will be.

Incredibly, current climate pledges could keep heating below 2C – but our work isn’t over