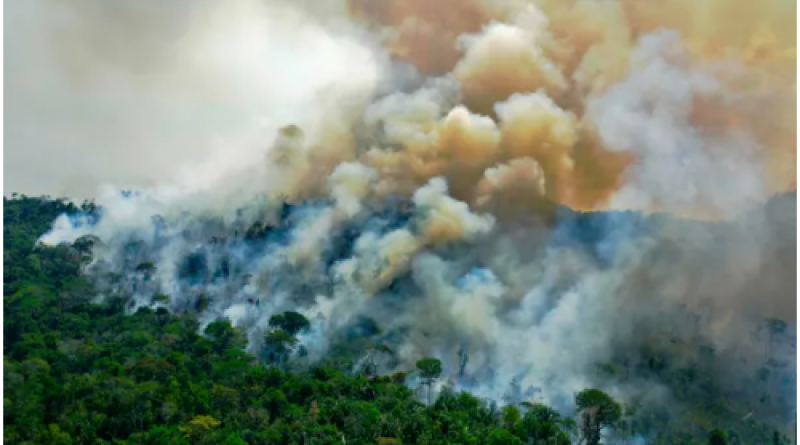 Analysis shows significant risk of cascading events even at 2C of heating, with severe long-term effects.

Ice sheets and ocean currents at risk of climate tipping points can destabilise each other as the world heats up, leading to a domino effect with severe consequences for humanity, according to a risk analysis.

Tipping points occur when global heating pushes temperatures beyond a critical threshold, leading to accelerated and irreversible impacts. Some large ice sheets in Antarctica are thought to already have passed their tipping points, meaning large sea-level rises in coming centuries.

The new research examined the interactions between ice sheets in West Antarctica, Greenland, the warm Atlantic Gulf Stream and the Amazon rainforest. The scientists carried out 3m computer simulations and found domino effects in a third of them, even when temperature rises were below 2C, the upper limit of the Paris agreement.

The study showed that the interactions between these climate systems can lower the critical temperature thresholds at which each tipping point is passed. It found that ice sheets are potential starting points for tipping cascades, with the Atlantic currents acting as a transmitter and eventually affecting the Amazon.

“We provide a risk analysis, not a prediction, but our findings still raise concern,” said Prof Ricarda Winkelmann, at the Potsdam Institute for Climate Impact Research (PIK) in Germany. “[Our findings] might mean we have less time to reduce greenhouse gas emissions and still prevent tipping processes.”

The level of CO2 in the atmosphere required to push temperatures beyond the thresholds could be reached in the very near future, she said. “In the next years or decades, we might be committing future generations to really severe consequences.” These could include many metres of sea-level rise from ice melting, affecting scores of coastal cities.

“We’re shifting the odds, and not in our favour – the risk clearly is increasing the more we heat our planet,” said Jonathan Donges, also at PIK and part of the research team.

In May, scientists reported that a significant part of the Greenland ice sheet was on the brink of a tipping point. A 2019 analysis led by Prof Tim Lenton at the University of Exeter suggested the world may already have crossed a series of climate tipping points, resulting in what the researchers called “an existential threat to civilisation”.

The climate crisis may also mean much of the Amazon is close to a tipping point, at which carbon-storing forest is replaced by savannah, researchers have warned. The ocean currents of the Atlantic Meridional Overturning Circulation (AMOC), of which the Gulf Stream is an important part and keeps western Europe mild, are at their weakest in more than a millennium.

The research, published in the journal Earth System Dynamics, used a new type of climate model because existing models are very complex and require huge computing power, making them expensive to run many times. Instead, the researchers used an approach that focused specifically on how the temperature thresholds for the tipping points changed as the systems interacted, allowing them to run the 3m simulations.

An example of the complex chain of interactions the researchers tracked is the melting of the Greenland ice sheet. This releases fresh water into the ocean and slows down the AMOC, which is driven partly by dense, salty water being pulled down towards the ocean floor. A weaker AMOC means less heat is transported from the tropics towards the north pole, which in turn leads to warmer waters in the Southern Ocean. This can then destabilise ice sheets in Antarctica, which pushes up global sea level and causes more melting at the edges of the Greenland ice sheet.

“The study suggests that below 2C of global warming – ie in the Paris agreement target range – there could still be a significant risk of triggering cascading climate tipping points,” said Lenton. “What the new study doesn’t do is unpack the timescale over which tipping points changes and cascades could unfold – instead it focuses on the eventual consequences. The results should be viewed as ‘commitments’ that we may be making soon to potentially irreversible changes and cascades, leaving as a grim legacy to future generations.”

However, the chance of a cascade of tipping points leading to a runaway greenhouse effect, where the planet gets ever hotter even if humanity stops carbon emissions, is extremely unlikely, according to Prof Anders Levermann, also at PIK but not involved in the new work. “The Earth will get as warm as we make it, which means we’re the ones [that must] stop it,” he said.

The tipping points at the heart of the climate crisis

‘It’s super worrying’: Droughts and fires in the Amazon continue to cause CO2 emissions…