‘Compound extremes’: why a cocktail of natural disasters is battering the US 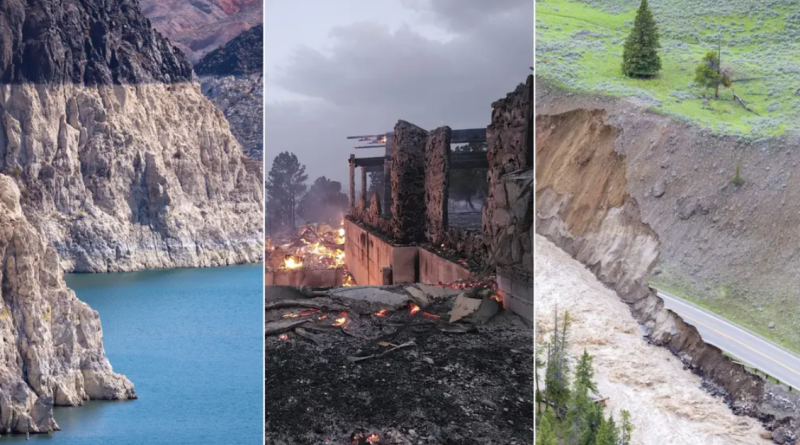 As world heats up, ‘historic’ weather events will increase and overlap, testing the limits of nation’s resiliency and recovery

Summer in the American west is off to an explosive start, with extreme weather events ravaging multiple states in recent weeks. In Montana, historic flooding devastated communities and infrastructure in and around Yellowstone national park and forced a rare closure. Further south, reservoirs sank to new lows, triple-digit heatwaves left millions sweltering, and wildfires ripped through Arizona, New Mexico, Alaska and California.

These layered disasters offer a glimpse of what’s to come. As temperatures continue to climb, extreme events will not just increase – they’re more likely to overlap, causing more calamity and testing the limits of the nation’s resilience and recovery.

“The US has a certain amount of capacity to cope with extreme events,” said Dr Andrew Hoell, a meteorologist for the National Oceanic and Atmospheric Administration’s (Noaa) physical sciences laboratory, adding that capacity is stretched when these events build on one another, either regionally or sequentially.

Natural disasters, from floods to droughts to wildfires, have always occurred in areas across the west, and it will take time for scientists to study the precise connections between events like the destruction in Yellowstone and the climate crisis. But it is clear that, in a warming world, combinations of factors are increasingly likely to align and turn routine events into a catastrophe. So-called “compound extremes,” where a combination of contributing factors come together, are on the rise, Hoell said.

With increasing global surface temperatures the possibility of more droughts and increased intensity of storms will likely occur, US Geological Survey

A layering of dangerous realities

The flood in Yellowstone was one such “compound extreme”.

Warming weather flushed melting snow into the waterways as a deluge pelted the region, dropping up to 3 months-worth of summer rain over the span of just a few days, according to an accounting done by CNN. Researchers with the US Geological Survey (USGS) and two universities had already sounded the alarm that an event like this was increasingly likely, publishing a report last year on how the climate crisis could threaten the park. Noting that average temperatures could increase by up to 10 degrees in the coming decades, they concluded that the region should expect intense dry conditions peppered with dangerous downpours.

“With increasing global surface temperatures the possibility of more droughts and increased intensity of storms will likely occur,” USGS scientists wrote. “As more water vapor is evaporated into the atmosphere it becomes fuel for more powerful storms to develop.”

The unprecedented and sudden flooding earlier this week toppled telephone poles, knocked over fences, wiped out roads and bridges, and threatened to cut off fresh drinking water supplies to the state’s largest city, after officials in Billings, Montana, were forced to shut down its water treatment plant.

“None of us planned a 500-year flood event on the Yellowstone when we designed these facilities,” said Debi Meling, the city’s public works director. Remarkably no one was reported hurt or killed, but the damage has been possibly permanent and recovery could take years.

Now in the third year of deeply dry conditions, roughly 44% of the American west has been categorized in extreme drought, according to the US drought monitor. Once-lush hillsides have grown brown, waterways have receded into the cracked earth and the agricultural, ecological and industrial impacts are expected to mount, and swaths of the west will go without hope of precipitation through the summer and into autumn.

That’s also loaded the dice for wildfires, as blazes behave more erratically and grow harder to battle. States in the south-west have been hammered by dozens of conflagrations this spring, including a ferocious fire in New Mexico that became the worst in the state’s history.

The number of square miles burned so far this year is more than double the 10-year national average, and wildfires have already set records and destroyed hundreds of homes.

Destructive fires, a devastating drought, and torrential floods are each catastrophes in their own right – but when they overlap they are even more capable of causing calamity. Scientists say these events are happening more frequently, and that the climate crisis is a key culprit.

“These are three events that are all extremely consistent with our baseline well-understood expectations of climate change,” said Dr Karen McKinnon, a climate scientist and professor at University of California Los Angeles. She explains how, when the atmosphere warms, it holds onto more moisture. That deepens drought conditions and sets the stage for stronger storms.

“The most basic influence of us putting more greenhouse gasses in the atmosphere is temperatures warming,” she said.“We can pretty confidently say going forward that these types of events are just going to be more likely because temperatures keep going up and up.”

While extreme heat makes other weather events more dangerous, it’s also a deadly threat on its own. Heatwaves have already taken a serious toll this year. Millions of people across the US have faced sweltering springtime temperatures that fail to drop at night, increasing the potential for harm to health. An investigation by the LA Times published last year found that fatalities from heat are abysmally undercounted in California, and that related deaths could be as much as six times higher than the official tally.

“What we are seeing is we are just going to be getting more and more of these heatwaves breaking records because we are moving temperatures toward warmer conditions,” McKinnon said. Scientists say heatwaves are also growing in size, impacting entire regions with greater frequency. Roughly a third of Americans – more than 100 million people – had to grapple with dangerous temperatures as a heatwave covered large swaths of the country last week.

‘Biggest crisis facing our nation’, but can resources keep up?

Compounding catastrophes have put strain on resources. From a severe shortage in firefighters ahead of peak risk periods to difficulty reining in water-use, agencies struggle to prepare for the worst effects. Patrick Roberts, a senior political scientist at the Rand Corporation who studies disasters, says many systems have gotten better at contending with simultaneous events but there’s more work to be done.

“Covid gave us the experience of a national emergency,” he said, noting that although the pandemic has been dire, it helped streamline national systems that never had to respond simultaneously to an event not confined to a geographical region.

Not preparing comes at a high cost, both financially and in the devastation wreaked on communities.

Every dollar spent on hazard mitigation saves the US $6 in future disaster costs, according to a study released in 2019 by the National Institute of Building Sciences. Last year, the US spent an alarming $145bn on natural disasters – the third highest amount on record – and grappled with 20 extreme events that cost more than $1bn each, close to triple the average since 1980.

The Federal Emergency Management Agency (Fema) is already bracing for an escalation in need this year and for the ones that follow, requesting $19.7bn for its 2023 disaster relief fund.

“The field of emergency management is at a pivotal moment in its history,” Fema administrator Deanne Criswell said during a hearing of the House homeland security subcommittee on emergency preparedness, response and recovery. The agency is managing more than triple the amount of disasters this year as it did a decade ago.

“The changing climate is the biggest crisis facing our nation and makes natural disasters more frequent and more destructive,” Criswell said. “While our mission itself has not changed, our operating environment has.”

Slow water: can we tame urban floods by going with the flow?

Nepal to move Everest base camp from melting glacier