This Desert May Contain Secrets To Avoiding Climate Famine 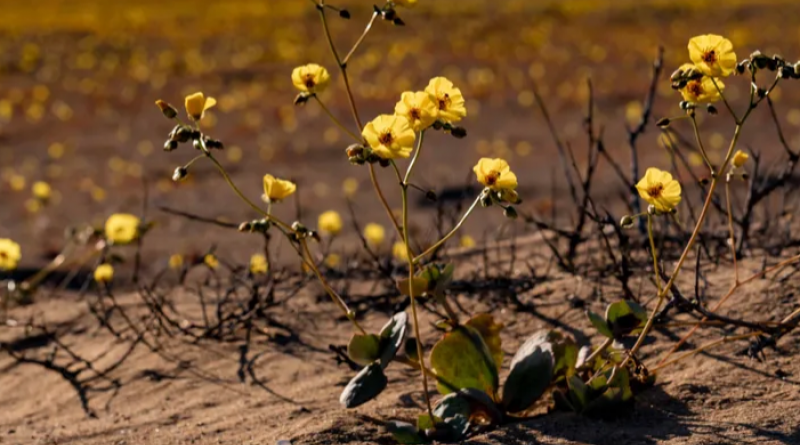 A landmark new study of plant life in one of the world’s driest places could yield new drought-resistant crops — if mining for electric vehicle batteries doesn't destroy the ecosystems first.

Average rainfall totals little more than 0.04 inches per year, and yet plant life adorns the area in what would be the ear-shaped continent’s tragus with indigo cones of Lupinus oreophilus flowers, lime-green blobs of Azorella atacamensis, and Solanum chilense ― wild tomatoes that, when ripe, look like little dark plums.

For 10 years, Rodrigo Gutiérrez made routine trips 1,000 miles north from his laboratory at Pontificia Universidad Católica de Chile in the capital city of Santiago to 22 separate sites in the desert, where he measured the temperature and water, and collected samples of plants, soils and the microbes that cling to both. The molecular biologist then partnered with scientists from across the hemisphere and disciplines ― botanists, microbiologists, ecologists ― to decode the plants’ genes and learn how they adapted to survive in an environment extreme enough to challenge his own physical stamina.

On Monday, Gutiérrez and 26 of his colleagues published nearly 300 genetic discoveries in a peer-reviewed paper in the prestigious Proceedings of the National Academy of Sciences. What they found could contain the secrets to avoiding food shortages in an increasingly hot, drought-prone world, providing scientists the genetic tools to breed resilient new crops.

“With the population we have, we need to produce food and crops despite increasing desertification,” Gutiérrez said. “The only way we’ll be able to do that is if we can engineer some kind of tolerance to drought in crops.”

But the findings also come as a warning of what could be lost as the global economy curbs its appetite for fossil fuels with solar panels and batteries made of lithium and copper, vast quantities of which are mined in the mineral-rich Atacama Desert.

The different, and in some ways conflicting, resources for a hotter world highlight the tradeoffs of the energy transition, and give weight to environmentalists’ pleas for a new green industrial boom to avoid replicating the ecological recklessness of its fossil-fueled forerunner. Surging demand for the Atacama’s geological treasures threatens to drain what little water sustains the desert’s complex webs of life faster than nature can adapt. The region already supplies upward of 30% of the world’s lithium, a compound so desired in the green economy it’s sometimes called “white gold,” and Chile’s government is looking to expand production. Climate change, meanwhile, is only adding pressure, making the Atacama even drier than in years past.

The study is as much a triumph of collaboration between continents as disciplines. The Chilean researcher collected samples of 32 dominant plant species in the Atacama, stored them in liquid nitrogen, then sequenced their RNA back at the lab in Santiago.

Crunching nearly 1.7 million protein sequences and close to 8.6 million amino acids across more than 70 species, the resulting analysis zeroed in on 265 separate genes whose protein sequences mutated as the plants evolved to live in the Atacama, including those that made it easier to survive under high-light radiation, in long periods without water, and in salty and nitrogen-poor soil.

To test how the genes worked, the researchers then crosschecked them with related genes in the widely studied model species Arabidopsis, a flowering Eurasian plant known as thale cress, confirming that they did, in fact, play a role in function such as managing the sun’s radiation and dealing with extreme temperatures.

“It’s a mine, but it’s also a genetic goldmine,” said Gloria Coruzzi, a molecular biologist at New York University who helped sequence the plants’ genomes and co-authored the study, referring to the lithium and copper production in the region. “We’re extracting the genes that enable the plants to grow in that desperate environment.”

The findings were not limited to genetics alone. The scientists also identified microbes in the soil that pulled nitrogen from the air into the soil, providing the scarce nutrient to the plants’ roots. At a time when scientists and Silicon Valley startups are seeking new ways to wean U.S. farmers off their addiction to nitrogen fertilizer, which pollutes water and produces large amounts of planet-heating gas.

‘Our biggest challenge? Lack of imagination’: the scientists turning the desert green.