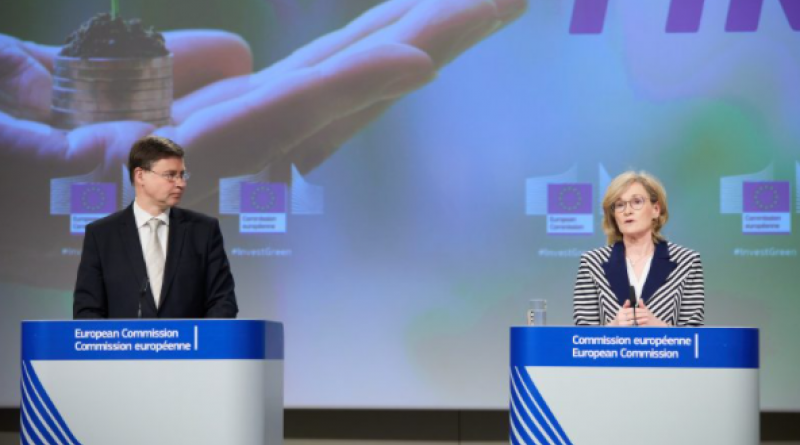 The European Commission on Wednesday (21 April) unveiled a first batch of implementing rules under the EU’s sustainable finance taxonomy, spelling out detailed technical criteria that companies need to comply with in order to win a green investment label in Europe.

The taxonomy rule book introduces a labelling system for investment that could divert hundreds of billions in funds to industries and companies that win a “sustainable” label for all or part of their activities.

It covers 13 sectors, including renewable energy, transport, forestry, manufacturing, buildings, insurance and even the arts, which together account for nearly 80% of EU greenhouse gas emissions, the European Commission said.

A decision on gas and nuclear, the two most controversial aspects of the taxonomy, was delayed and will be dealt with separately.

“The taxonomy describes which economic activities are in line with the Paris Agreement,” and its objective of limiting global warming to 1.5°C, said Vladis Dombrovskis, the European Commission vice-president in charge of the economy.

It will do its part by “helping companies and investors to know whether their investments and activities are really green,” Dombrovskis said.

In short, “it sorts green from greenwash,” he added.

“Today’s new rules are a game changer in finance,” said Mairead McGuiness, the EU’s financial services commissioner, who pointed out that “significant investments are required” to meet the EU’s climate goals.

Indeed, meeting the EU’s 2030 climate goal will require €350 billion of investments every year, according to the Commission. And all companies should be able to contribute, even those that are not yet 100% green, McGuiness said.

“We need all companies to play their part, both those already advanced in greening their activities and those who need to do more to achieve sustainability,” she said in a statement.

Gas and nuclear out

Following heated controversy, gas and nuclear power were left out of today’s proposals. EU member states and lawmakers in the European Parliament had threatened to veto an earlier draft because it did not consider gas as a transition fuel.

A decision to include them could be presented in June, together with a second batch of implementing rules dealing with “transition” activities, Dombrovskis said.

“And we will also consider a separate legislative proposal – a separate regulation – to see how to ensure the role of gas in moving away from coal,” the commissioner added.

On nuclear, EU experts are currently reviewing the safety of nuclear waste handling and, pending that assessment, atomic energy could be included in the June proposal, Dombrovskis said.

The gas industry welcomed the EU’s decision to come up with separate legislation on gas, saying the move represents “an opportunity to go further in the fight against climate change”. In the meantime, rules covering investments in hydrogen and biomethane will help the EU make a head start towards its climate goals, said Eurogas, a trade association.

“The European Commission has worked quickly to include the gas technologies necessary to contribute to the energy transition and decarbonisation such as hydrogen and its infrastructure grids, anaerobic digestion, biomethane and district heating” said James Watson, secretary general of Eurogas.

Bioenergy and forests in

On the farming’s sectors inclusion in green finance, the Commission has decided to “wait until the reform of Common Agricultural Policy is completed,” McGuiness said, expressing hope that rules there could be updated “by the end of this year”.

Forestry and bioenergy are included though, she added, saying rules there will be updated in line with the EU’s upcoming forestry strategy and revised renewable energy directive, which will be tabled in June.

Bioenergy is considered carbon neutral under current EU rules, something which environmentalists say has encouraged the burning of growing quantities of wood for electricity production.

“We simply cannot afford to lose more time debating the sustainability of false solutions like fossil gas, nuclear power and the burning of trees for energy,” said Silvia Pastorelli from Greenpeace. “Green finance cannot be a lifeline for polluters. It must focus on the restoration of forests and the deployment of genuinely renewable energy sources,” she said.

McGuiness defended the Commission’s science-based approach to the taxonomy though, and also insisted on the need to compromise. Dialogue with EU member states, the European Parliament, and industry stakeholders has been intense over those issues, she admitted.

“The underpinning of the taxonomy has to be science-based but you cannot divorce the science from the real world and real concerns,” she said. “And that’s how it should be so we can design the best possible mechanism so that the European Union not only leads but does it with credibility”.

The taxonomy “is a living document” that “will evolve with science and technology,” McGuiness stressed, saying updates will be made when changes are made to EU laws on climate, energy and agriculture.