Everyone, everywhere: the global challenge of climate change. 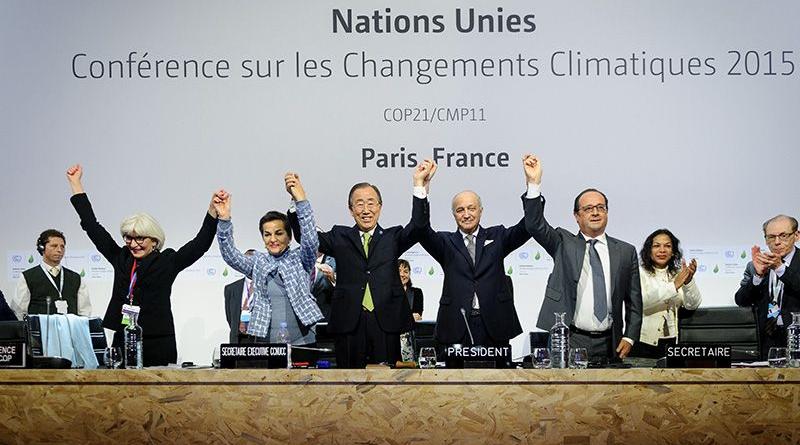 Climate change demands action: humanity must shift from persistent destruction to intentional regeneration. So, how best to make that happen? Two new books give very different answers. In one, the solution lies exclusively with nation states and their protection of security and self-interest. The other expects a global-scale spirit of shared endeavour to harness the collective power of governments, corporations and individuals.

The collaborative approach is set out insightfully in The Future We Choose. Its authors — Christiana Figueres and Tom Rivett-Carnac — had crucial roles in the Paris climate agreement of December 2015. Hailed both as a monumental achievement and as woefully inadequate, the agreement saw 197 parties commit to keeping the global average temperature rise to less than 2 °C above pre-industrial levels. Figueres is recognized as the person most responsible for that achievement: as executive secretary of the United Nations Framework Convention on Climate Change, she was at the heart of the process for six years, from the aftermath of the breakdown of negotiations in Copenhagen in 2009 to the success in Paris. Rivett-Carnac worked with Figueres at the UN and ran political strategy for the agreement.

Visions of the future

The book is an immersive journey through two very different visions of the year 2050. In one, the world has no fresh air and two billion people live with temperatures exceeding 60 °C for days on end. On the alternative, thriving, green planet, renewable energy powers smart grids and 50% of the land is covered in forest. Although such a stark choice could be criticized as simplistic, it brings into sharp relief the risk that humanity runs.

“Systemic change is a deeply personal endeavor,” the authors write. The most effective way to get anyone to act — from the person on the street to the diplomat in the negotiation room — is, they argue, to shift mindsets towards a deep acknowledgement of humanity’s dependence on nature.

Figueres and Rivett-Carnac are in a prime position to unpick exactly how to do that. Their behind-the-scenes stories are captivating, including the little-known details of the 2014 climate negotiations in which China and the United States moved away from competition towards shared wins, or Figueres’s decision to keep the 2015 conference running after UN security services found a bomb in the underground station serving the conference centre. I yearned for more, however, on what it took to change the mood and get commitment that no one thought possible. What was the exact chain of events leading up to the strike of the green gavel at 7.25 p.m. on 12 December 2015?

One of the duo’s major achievements was to bring civil society and business into the historically intergovernmental affair. Rivett-Carnac, for example, designed and led the Groundswell Initiative — a largely covert organization that mobilized support for the ambitious agreement from a wide range of stakeholders. Nation states are not the single or even most important driver in solving the climate crisis; it is, as the authors put it, an “everyone-everywhere mission”.

By contrast, Climate Change and the Nation State argues for reframing the struggle in nationalist terms. Some 55% of all emissions come from four countries — China, the United States, India and Russia. What would compel these states to drastically change their behaviour and reduce emissions? For author Anatol Lieven, the answer lies in self-interest.

A British journalist with significant expertise in Pakistan and Russia, and an academic post in international relations, Lieven weaves his first-hand knowledge and experience into a compelling narrative. The branch of international-relations theory called realism, which assumes that states act to maximize their power, has rarely considered environmental concerns. Lieven calls on his realist colleagues to “wake up” to climate change as a paramount security threat. The heatwaves across Europe in 2003 and in Russia in 2010, he points out, respectively claimed more lives than France lost in its eight-year war in Algeria and Russia lost in a ten-year conflict with Afghanistan.

The mass movement of people, Lieven argues, will be “the most dangerous indirect effect … on Russia and the West”. The confluence of climate change, migration and automation will be the perfect storm, rivalling the devastation of nuclear war. Displacement of large numbers of people will put strain on states’ ability to provide for their populations. When this comes on top of massive unemployment resulting from increased automation, the nation state will not be able to respond. That will lead to a world much like Figueres and Rivett-Carnac’s potential dystopia.

Lieven makes a strong case for urgent action, especially by powerful states. He sees the armed forces, as experts on national security, as the logical first responders — not just for crowd control, but for large-scale infrastructure changes such as building flood defences. He advocates military support of the US Green New Deal, for example.

But Lieven is wrong to disregard global governance. Climate change is the quintessential worldwide problem. No one state, no matter how powerful its economy or military, can resolve it alone. Despite the primacy of the nation state in international affairs, global agreements and institutions are indispensable in ensuring that commitments are fulfilled, action is supported and agreements revised — think of the role of the World Health Organization in the coronavirus pandemic. This underscores that human and planetary health are inextricably bound, that global action is imperative, and that effective international or supranational organizations are crucial.

Lieven is convincing when he writes: “If there was ever an issue that demands prudence in judgment and courage in action, it is climate change.” But the judgement and action have to be global. Figueres and Rivett-Carnac might come across as overly optimistic in their conviction that a sense of global responsibility, for fellow humans and other species alike, will prove sufficient to spur the necessary action. But their short and simple book grabs you by the heart and makes you want to join the great adventure against overwhelming odds.

This Is the Way the World Ends - New Book from Jeff Nesbit!