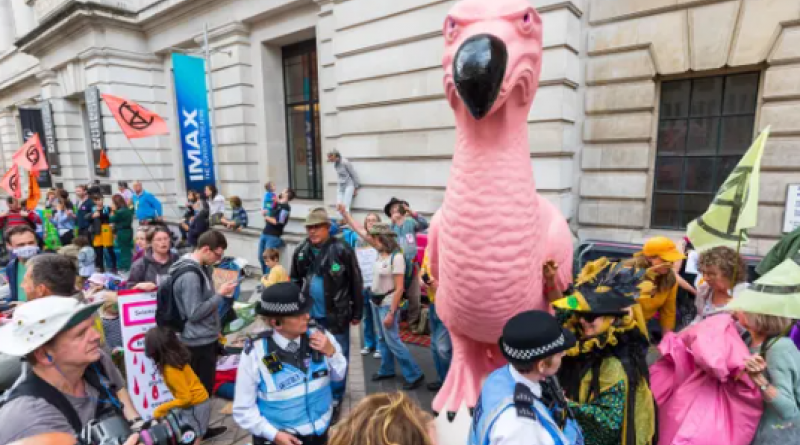 Demonstrators attach themselves to railings in reaction to museum taking funding from oil firm for Our Future Planet show.

Extinction Rebellion protesters have glued and locked themselves to the railings inside the Science Museum, in a protest against the oil firm Shell’s sponsorship of an exhibition about greenhouse gases.

Five people have put their arms through the railings and glued their hands together so that they are not damaging the museum’s property. Six have deadlocked their necks against the railings. Some are scientists dressed in lab coats, while others are in clothes with Extinction Rebellion logos.

Earlier, protesters were escorted by police and members of the museum security team as they moved through the ground floor of the museum in South Kensington while about 200 supporters, including the Olympic sailor Laura Baldwin, gathered outside.

They chanted, “Hey hey, ho ho, sponsor Shell has got to go” as those outside sang “No more petrol, no more diesel, funding fossil fuels is evil”, waved flags and banners, played drums and blew whistles.

Doctors, scientists and members of the climate campaign group addressed the crowd about the effect that fossil fuels are having on the planet. A 12-foot model of a pink dodo – the bird driven to extinction in the 17th century – was erected by protesters.

A group called Silent Rebellion sat outside in silence and appeared to meditate near the entrance to the museum.

Protesters staged a “die-in” on half of the ramp that leads to the museum’s entrance. Members of security at the museum urged them to keep one side of the ramp free for wheelchairs and pushchairs, which the protesters were doing.

By 7pm some protesters had begun to leave the museum, and about 70 people were left inside the foyer.

Meanwhile, a blockade was set up outside the adjacent Natural History Museum, with hundreds of protesters and supporters stopping traffic at the junction of Cromwell Road and Exhibition Road. A large blue van was parked on Cromwell Road and a man was on top of it holding an Extinction Rebellion banner. Police also blocked off the junction with a police van and a number of officers.

Outside, Baldwin gave a speech to the protesters outlining her reasons for joining the movement in 2019. She said: “Learning about the dire situation, the dire state of our beautiful planet, broke my heart.

“It filled my heart with dread and fear for my child’s future. As a desperately protective mother, I refuse to accept my son’s life as collateral damage for the few to continue economic growth, business as usual, as long as mother nature will allow it.

“As well as continuing to apply pressure to the government, which we must do through non-violent direct action, we need to also dream about how our future world could look.”

Extinction Rebellion has criticised the Science Museum for taking funding from Shell for the Our Future Planet exhibition, which began on 19 May and runs until September.

The climate activist Greta Thunberg has also hit out at Shell’s sponsorship after previous reports said the museum had signed a gagging clause over the funding of the exhibition. The exhibition explores the technologies being developed to remove carbon dioxide from the atmosphere.

Dr Charlie Gardner, an associate senior lecturer in conservation science at the University of Kent and a member of Scientists for Extinction Rebellion, said: “We find it unacceptable that a scientific institution, a great cultural institution such as the Science Museum, should be taking money, dirty money, from an oil company.

“The fact that Shell are able to sponsor this exhibition allows them to paint themselves as part of the solution to climate change, whereas they are, of course, at the heart of the problem.”A Shell spokesperson said: “Our target is to become a net zero emissions energy business by 2050, in step with society. Shell works with our customers to identify the best paths to decarbonisation; we seek to avoid, reduce and only then mitigate any remaining emissions.”