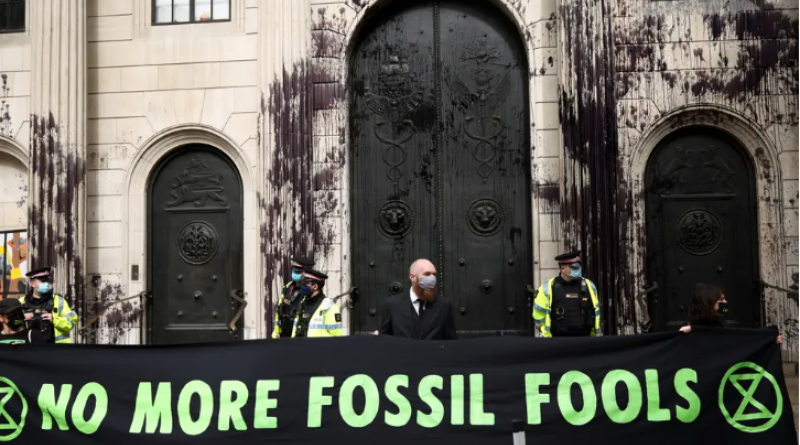 Extinction Rebellion will focus its direct action protests on the banking sector over the coming weeks after the group targeted the Bank of England and branches of high street banks across the country over the bank holiday weekend, as it orchestrates a wave of demonstrations designed to highlight banks’ role in the climate and ecological crises.

A wing of the group, branded Money Rebellion, said the action aims to highlight how banks are among the institutions which they claim are “prioritising short-sighted, short-term profits over long-term survival”.

The group said: “By continuing to fund climate and biodiversity destruction, our governments and banks have demonstrated they can be trusted with neither our money nor our lives.”

These institutions have continued doing this, Extinction Rebellion said, “in the very midst of a global pandemic, [because] bailing out fossil fuel industries and lowering environmental standards were preferable to protecting ordinary citizens.”

The wave of action is designed to highlight “the deadly role of banks in what is a suicidal economic system that, by design, financially incentivises harm to biodiversity, the climate, and our future”, the organisation said in a statement.

The group sprayed fake biodegradable “oil” over the front of the Bank of England on 1 April, targeted Barclays Bank headquarters in London, and protests were also held in cities including New York, Paris and Vancouver, and at bank branches across the UK, including in Glasgow, Edinburgh, Nottingham, Worcester, Falmouth, Kings Lynn, and also in Stroud, where Extinction Rebellion co-founder Gail Bradbrook was arrested after the group released footage of her appearing to take a hammer and chisel to the windows of Barclays Bank.

Dr Bradbrook said: “We are on a path towards the collapse of our civilisation – with billions dying in our children’s lifetimes, according to some scientists. Those who are failing to lead adequate action on the climate and ecological crisis are committing crimes against humanity.

In the statement announcing the action, Extinction Rebellion quoted University of Cumbria Professor Jem Bendell, who said: ‘There is no way out of our Covid debts within this monetary system, unless we speed up our consumption and destruction of ecosystems which then increases the risk of future pandemics.

“It’s a debt Catch-22 that we will only escape with monetary reform. The deaf ears of politicians on this matter is why some people think a Money Rebellion has become necessary.”

Last week, US environmental group Rainforest Action Network released an analysis revealing that the world’s top 60 banks have spent an eye-watering $3.8 trillion on fossil fuels since the 2015 Paris agreement, and their 2020 investments are larger than those made in 2016 or 2017.