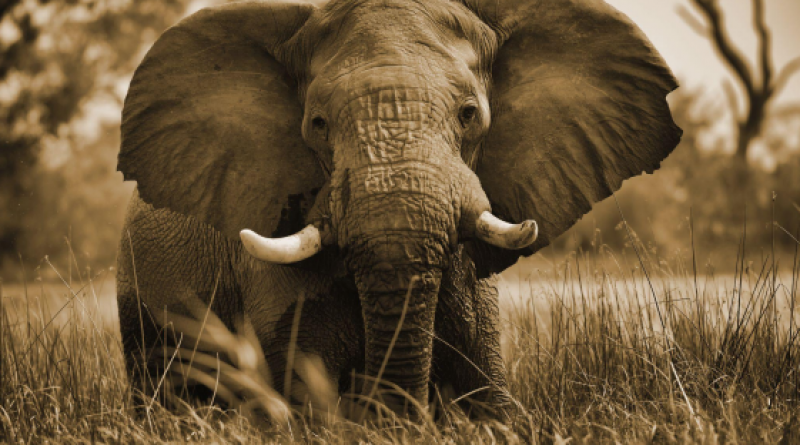 May 2021 (Namibia/Botswana/South Africa) – With ~50 million years of evolution buttressing a complex matriarchal social structure, elephants demonstrate heightened intelligence, intense emotions, are self-aware and mourn their dead [1]. Known to be sensitive to drilling-related seismic activity, elephants alter migratory patterns in response [2]. If ReconAfrica’s activities persist within the Delta, the elephants of the Okavango, already refugees of poaching and habitat loss, simply have “no place left to go”.

Where will the giants roam? At present, ReconAfrica is installing “test wells” over an area larger than Belgium; one that straddles Namibia and Botswana. The extraction project represents the world’s ‘largest oil play of the decade’, per Oilprice.com [3]; the region is a critical migratory corridor for an estimated 18,000 African elephants [4]; these elephants form a significant portion of a full third of Africa’s last elephants, specifically, the 130,000 who call Botswana home [5]. ReconAfrica’s extraction efforts in the Okavango region are likely to result in a catastrophic disruption of Africa’s last and largest remaining population of elephants. The consequence is tantamount to the genocide of earth’s last great walkers, to the “genocide” of sentient creatures, millions of years old.

Anthropogenic causal factors have delivered devastating losses to earth’s biodiversity; two-thirds of all wild animals have disappeared in the last fifty years and just 3% of the world’s ecosystems remain intact [6]. The impacts of heightened Climate Change may have already caused a mass die-off of elephants in the region; between 2019-2020, hundreds of elephants exhibiting symptoms of neurological disorders literally fell to their deaths in the Delta [7]. Scientists believe an excessive bloom of Cyanobacteria, a toxic bacterium occurring in water sources, led to the mass die-off. The bacteria thrive in warmer waters; unmitigated Climate Change will increase the frequency of toxic blooms, exacerbating the risk to elephants and all animals using water resources in the Delta [8]. It is ironic that the Namibian government and ReconAfrica have engaged in a collaborative enterprise poised to release more carbon into earth’s atmosphere by drilling within a pristine ecosystem where hundreds of elephants met their death just months before from a toxic bloom linked to Climate Change.

“What we see of oil exploration and distribution is the tip of the iceberg. The associated infrastructure and subsequent rendering of the landscape easily accessible does equal damage and leads to bigger risks or losses. The landscape loses its intrinsic value. But that is hard to quantify, unless you can grasp the concept of wilderness.” says Craig Spencer, founder of Transfrontier Africa and the Black Mambas and Retired Head Warden of Balule Nature Reserve and Warden of the Olifants West Region in South Africa.

The Red List status for savannah elephants was recently revised to ‘endangered’ by the International Union for Conservation of Nature [9]. Yet savannah elephants are not the only species threatened by ReconAfrica’s plans for the Delta. The IUCN reports that ReconAfrica’s operating license covers the habitat of four critically endangered species, seven endangered species and twenty species listed as vulnerable. Among the species affected are the African wild dog, the grey crowned crane, the white-backed vulture, the black rhino, the Temminck’s pangolin and the martial eagle [10].

Ecotourism is a primary source of income for Namibia; it accounts for a whopping 14.1% of Namibia’s GDP [11]. The Okavango Delta itself generates millions each year in sustainable revenue and is a prime tourist destination. These revenues sustain the lives and livelihoods of Namibia’s people. The decision to drill within the Delta has the potential to yield chronic ecological, economic and reputational losses for Namibia. Compounding the problem, roads built to service the extraction project will increase access to the region and render the area more vulnerable to poaching [12]. The outcome of increased poaching will have a devastating impact on the already dwindling rhino population of the Delta [13].

Transparency and accountability are recurrent casualties in ReconAfrica’s hunt for oil in the Okavango. Local communities in Namibia report that they have not been informed of operations and were not consulted prior to the production and conclusion of the Environmental Impact Assessment initiated by ReconAfrica [14]. Rural and indigenous communities are on the frontlines of Climate Change; they are the first victims of unpredictable weather, of prolonged droughts, of depleted water sources and of chronic pollution. Indigneous populations are significant sources of knowledge, information and adaptation in the context of vulnerable biodiversity and complex landscapes [15]. The international community must demand a revision of ReconAfrica’s EIA with full stakeholder participation.

ReconAfrica has a license to drill in Botswana, just as it does in Namibia; ~13.1% of Botswana’s GDP is derived from tourism [16]. Will Botswana heed the ecological unravelling in Namibia and establish policies that enhance economic viability through ecotourism, or will it disregard lessons learned?

The UN Biodiversity Conference is in October 2021 and May 22 is International Biological Diversity Day [17]. It is of vital importance that the international community amplify the ecological significance of the Okavango Delta between May 22 and October 2021. A global policy to ‘keep the wilderness wild’ must be advocated for, envisioned and enforced. COVID-19 has amply demonstrated the indispensable necessity to sustain intact and healthy human-wildlife interfaces. The disruption of wild places and the exploitation of wild creatures leads to the evolution of pathogens, sponsors spillovers and sets the stage for extinction events [18].

“At a time when wildlife populations have plummeted by two-thirds in just 50 years, and Africa’s elephants are critically endangered, we must do all we can to protect and cherish earth’s largest terrestrial mammal, a creature symbolic of Africa’s wild heritage and one who wordlessly captures the human imagination.” – Rosemary Alles, President & Co-Founder of Global March for Elephants and Rhinos (GMFER).

The Okavango Region is home to Africa’s largest remaining savanna elephant population, under fire by the oil and gas industry with projects across the continent. Credit: © humanape

Elephants or avocados: a Kenyan dilemma.