Extreme weather will be the norm and UK is not prepared, scientists warn 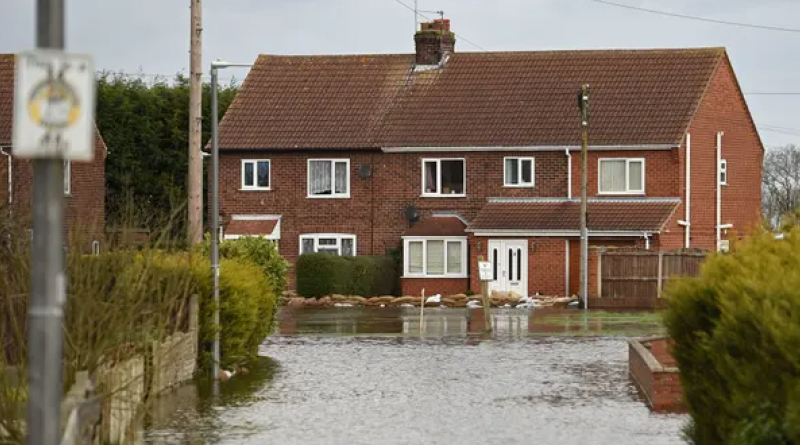 Last year was first to be in top 10 for heat, rain and sunshine, as scientists say UK’s mild climate is at an end

Extremes of weather will strike the UK more frequently owing to the climate crisis, scientists said after data showed that last year was one of the warmest, as well as one of the wettest and sunniest, on record.

Last year was the first to figure in the top 10 for heat, rain and hours of sunshine, in records stretching back more than a century, as moderate British weather is rapidly becoming a thing of the past, according to a report from the Met Office and climate scientists.

The extremely sunny start to lockdown in the spring of 2020 followed the wettest February, while a heatwave striking in August combined to make 2020 the third warmest year, the fifth wettest and the eighth sunniest on record, according to the State of the UK Climate 2020, published in the International Journal of Climatology.

Mike Kendon, senior climate scientist at the Met Office National Climate Information Centre, and lead author of the study, said: “The UK’s climate is already changing. The warming that we see is broadly consistent with what we see globally … and our climate seems to be getting wetter as well as warmer, and that’s consistent with our broad understanding of the process [of climate change].”

The UK’s weather records go back centuries in some cases, with a temperature series for central England dating to 1659 and other temperature records in an unbroken line from 1884, and rainfall going back to 1862, and in some cases further. The report’s authors amalgamated data from these series, and for sea temperatures and sea levels, and compared them with last year’s findings. 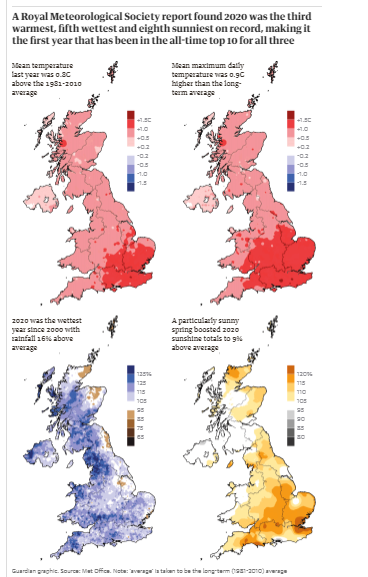 Globally, land temperatures are about 1.2C hotter than in pre-industrial times. Governments will meet this November in Glasgow, at the Cop26 UN climate summit, to try to agree a way of preventing the world from heating by more than 1.5C above pre-industrial levels.

Average weather is only part of the picture, however: scientists are particularly concerned that the UK’s weather is growing more extreme. Last year, storms Ciara and Dennis struck only a week apart and brought rainfall that was in some places more than four times the historical monthly average.

Kendon said: “We see a continuing emerging pattern of more high temperature and more rainfall extremes. The baseline of our climate is changing and what we regard as normal is changing.”

William Collins, professor of meteorology at the University of Reading, who was not involved in the report, said: “The UK’s weather is likely to become even more extreme as global temperatures rise. Governments have pledged to pursue efforts to limit temperature increases to 1.5C. Failure to do so will cause worldwide climate impacts, and we will not be immune in the UK.”

As the planet heats up under the influence of greenhouse gases, the warming air can hold more moisture, which is making the British weather much wetter than in the past.

Those extremes are likely to cause severe problems, as most infrastructure in the UK has not been built to tolerate the sort of rainfall, heatwave temperatures and storms that are likely to hit more frequently. Flooding has struck the UK again in recent days, after a heatwave earlier this month, raising questions over the UK’s ability to cope with extreme weather.

Liz Bentley, chief executive of the Royal Meteorological Society, which published the paper, warned of the danger of seeing warming weather through “rose-tinted glasses”, by focusing on warming weather, and said the extremes of heat and rainfall would bring many problems.

“When we saw the extreme heat events over the summer last year, the roads were starting to melt, on the rail network the rails started to buckle so all the trains have to slow down and we see lots of cancellations and postponements. The electrical cabling starts to buckle as well, and so we see power outages,” she said. “The impacts that it’s going to have on our daily lives [mean] it will start to have a much more negative effect than just some kind of warm sunny day.”

The impacts are also being seen in farming and on the natural world. The first leaves appeared much sooner and fell much earlier than usual last year, the report found. These effects can cause havoc for other species, which may find themselves out of sync – for instance, caterpillars and other invertebrates may peak before baby birds are born, leaving them with little to eat.

Darren Moorcroft, chief executive of the Woodland Trust, said: “If a species is becoming out of sync that potentially leads to a breakdown within food chains, and subsequently species struggling not only to survive but thrive.”

Sea level rise has also doubled since the start of the last century, going from 1.5mm a year to more than 3mm a year, equating to 2cm a decade in the last 60 years. Ed Hill, director of the UK’s National Oceanography Centre, said: “An immediate consequence will be higher extreme sea levels during high tides and storms which cause flooding.”