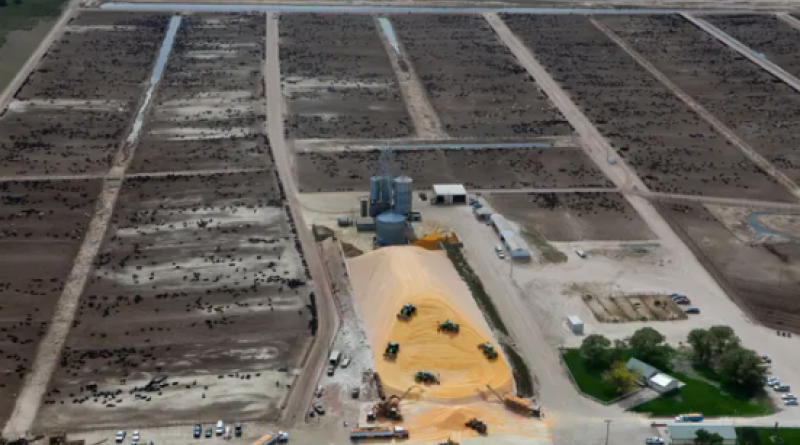 As the climate crisis boils over, new research shows that reducing methane emissions is our best hope to rapidly stem the crisis. It’s time to turn up the heat on the industrial meat industry and dramatically curtail its climate harm, which includes 32% of global methane emissions. Yet instead development banks are using public funds to expand this sector that generates 16.5% of total greenhouse gas emissions (GHGs).

On 19 and 20 October, hundreds of public development banks (PDBs) will gather for the second Finance in Common Summit to make pledges to advance Paris climate and UN sustainable development goals (SDGs). The summit – which will also focus on agriculture and agribusiness transformation – presents a vital opportunity for these banks to put their money where their mouth is and align their agriculture investments to meet these goals.

Development banks on every continent are directly undermining the UN SDGs and Paris goals by channeling billions of public dollars into multinational meat corporations. While undermining the livelihoods of small-scale producers, this heavily polluting industrial meat system is fueling the climate crisis, destroying precious ecosystems, promoting animal cruelty and increasing the risk of antibiotic resistance and future pandemics.

With vast documented evidence of factory farming’s destructive effects, a new global campaign, Divest Factory Farming, is calling on PDBs to immediately stop financing industrial livestock operations and shift their investments towards a more equitable and sustainable food system. A 2020 investigation by the Guardian and the Bureau of Investigative Journalism revealed that over the past decade, just two banks – the World Bank’s International Finance Corporation (IFC) and the European Bank for Reconstruction and Development (EBRD) – “have provided $2.6bn for pig, poultry and beef farming, as well as dairy and meat processing”. Additional research shows that the top five development banks have spent more than $4.6bn in this sector over the past 10 years.

Disturbingly, this trend continues unabated. In June, the IFC board approved a new $50m loan for Pronaca, Ecuador’s fourth largest corporation, to expand intensive pig and poultry production. This project is moving forward despite opposition from international and Ecuadorian groups, including indigenous communities who say that their water and lands have been polluted by the company’s operations.

In recent years, the Inter-American Development Bank’s private sector arm, IDB Invest (which also backs Pronaca), increased its investments in industrial livestock companies more than twentyfold in the Latin America and Caribbean region, from approximately $15m between 2011 and 2017 to around $500m from 2018 to present.

Stunningly, IDB is now considering a new $43m loan for Marfrig Global Foods, the world’s second largest beef company, under the guise of promoting “sustainable beef”. Numerous reports have linked Marfrig’s operations to illegal deforestation in the Amazon and Cerrado. The company paid large fines in 2018 in the face of corruption charges, and its cattle suppliers have been linked to human rights abuses.

There has been global outcry against the Marfrig loan. A recent letter sent to the IDB directors and president argues that while the IDB Invest loan targets “deforestation-free production” by 2025 in the Amazon and by 2030 in the Cerrado, “this loan will prop up a company whose current practices will likely lead to further legal and illegal deforestation and human rights violations in these regions,” for years. The letter was sent by 200 environmental, human rights, and development organizations from around the world.

IDB Invest is considering the Marfrig loan at a time when deforestation rates have increased 34% under Brazil’s far-right Bolsonaro regime. This administration, backed by agribusiness, is rapidly gutting environmental protections and enforcement while pushing a disastrous legislative agenda that will destroy forest protections and the rights of Indigenous peoples. In this context, it is doubly urgent to halt financing for companies like Marfrig that could take advantage of these weakened protections.

As documented in a Greenpeace report, Marfrig still has no effective procedures in place to guarantee that cattle ranchers linked to illegal deforestation or human rights violations are excluded from its supply chain. Marfrig acknowledges that it cannot currently verify the source of 40% of its indirect production in Brazil. With land grabbing, indigenous land rights disputes and illegal deforestation in regions where Marfrig operates, the letter notes, “the company’s failure to establish a timely and effective system to prevent these impacts would likely violate multiple performance standards and should disqualify Marfrig from receiving public financing from IDB Invest.”

While the banks argue that investments in giant livestock corporations create jobs, in reality these loans propel further consolidation and corporate power in a sector that harms workers, farmers and consumers. In recent years, Marfrig has spent $800m to acquire nearly a fourth of BRF, one of the world’s largest poultry producers, and another $969m to acquire almost 82% of shares in US-based National Beef Packing Co. With these latest purchases, Marfrig’s annual combined sales top $13bn. This is not a firm that needs or deserves public assistance.

Ultimately, these PDB investments entrench a destructive industrial food system that worsens our climate crisis. These investments mirror the misguided spending of governments worldwide. A recent UN report found that nearly 90% of the $540bn in global agricultural subsidies each year are “harmful”, with the largest subsidies going to industrial beef and milk production.

In Latin America, cattle production is responsible for 70% of deforestation across Amazon countries. According to the Inter-American Development Bank, more than 800,000 sq km of Amazonian jungle – equivalent to 90% of Venezuela’s landmass – has been deforested to make way for industrial livestock and animal feed production.

Unless we dramatically scale back meat and dairy and move swiftly to sustainable methods, experts project that livestock production alone could account for a whopping 80% of the world’s budget for greenhouse gas emissions (in a 1.5C temperature increase scenario) by 2050. If cattle were a nation, they would be the third largest emitter of greenhouse gases in the world. With less than 10 years to prevent irreversible climate catastrophe, every investment and policy must help greatly reduce emissions while bolstering food security and resiliency to weather upheavals.

By ending investments in factory farms, public development bank leaders will send a clear signal to other public finance institutions, the private sector, markets and governments that it’s time for meaningful emissions reductions from livestock, and time to shift subsidies and investments toward highly productive, lower-carbon ecological farming. There is no time to waste.