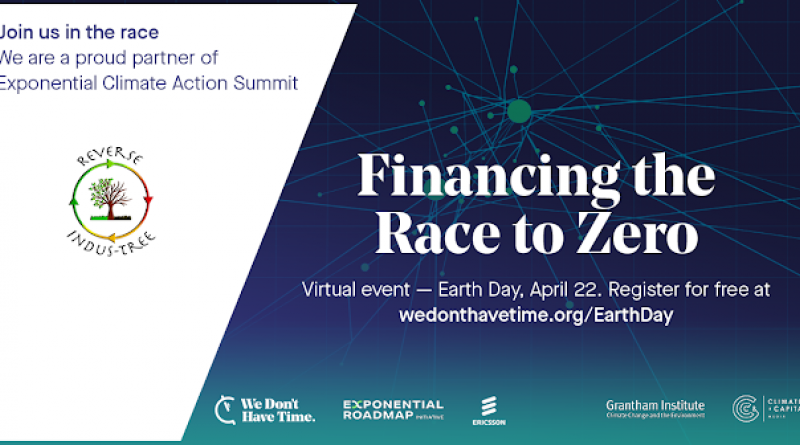 Top Climate Economist Lord Stern Will Say Achieving Net Zero Emissions by 2050 is the Growth Story of the 21st Century.

We Don’t Have Time, Exponential Roadmap Initiative and Grantham Institute, supported by Ericsson, mark Earth Day 2021 and the Biden Climate Leaders’ Summit Ahead of COP26 in Glasgow

22 April 2021, Stockholm/Global—Global financial flows and investments are finally ‘tipping’ away from the old, polluting, and unsustainable economy of the 20th century towards the climate-friendly economy of the 21st Century, one of the world’s leading economists is expected to declare this week.

Over the past three years increasing numbers of banks; asset managers and owners; finance ministers and investors have begun stepping up ambition driven by the urgency of halving by 2030 and reaching a net zero emission world by 2050, Lord Nicholas Stern will say.

The Chairman of the Grantham Research Institute on Climate Change and the Environment in London will point to the 1,500 organizations with $150 trillion in assets who are now committed to backing the net zero goal as one barometer of change.

Lord Stern, who is the keynote opening speaker on the second Exponential Climate Action Summit-Financing the Race to Zero event organized by We Don’t Have Time (WDHT), will also point to the increasing investor disaffection with fossil fuels as part of this ‘tipping point’ trend.

Not only is three times more money flowing into technologies like wind and solar, but the returns are outstripping investments in fuels like coal and oil.

• Between 2015 and 2020, the returns from investing in fossil free fuels in the United States was 10 per cent; in the UK 11 per cent and in Germany and France over 20 per cent. During the same period, returns on investments in fossil fuels in these four countries alone was either zero or negative

“The markets are speaking that the investments in fossil fuels are bad investments — and for good reason, because those are technologies from the last century and those that are going to go well are the technologies of this century,” he is expected to note.

But Lord Stern will argue that this is not time for complacency or being ‘swamped in over optimism’ if the world is to have a chance of keeping a global average temperature rise to no higher than 1.5 degrees C.

“Passing the (financial) tipping point and getting the job done are different—acceleration is not the same as velocity. This decade is decisive. We have to move very fast,” Lord Stern will say.

Ingmar Rentzhog, CEO and Founder of WDHT, said: “We need to halve emissions by 2030 to stand a running chance of meeting the net zero goal. This speaks to a massive, exponential, shift of trillions of dollars from the polluting industries, infrastructures, and practices of the past to the sustainable ones of the future. Is the world of finance up to the task? Tune in on 22 April to find out”.

The Financing the Race to Zero broadcast is taking place on Earth Day 2021 as President Biden signals the United States return to serious climate action by hosting his Climate Leaders’ Summit with 40 heads of state.

In advance of the UN Climate Conference (COP26) the broadcast has brought together some of the best and most diverse actors on financial solutions ad climate finance and given its central role in achieving the Paris Agreement and a sustainable future.

"One of the key ways in which finance can accelerate the shift to a net zero economy is by developing a just transition reflex, so that both the social opportunities and risks of decarbonisation are included in every financial decision" says Nick Robins.

"This means making the just transition a core part of shareholder engagement as well as developing financial mechanisms that deliver both the environmental and social dimensions of the transition," he added.

• Tariq Fancy, former Chief Investment Officer for Sustainable Investing at BlackRock points to fundamental flaws in how markets can handle the climate crisis

• Staffan Hansén CEO of SPP, one of the largest pension savings groups in the Nordics and Tomas Haglund-Flemström, Head of Impact & Innovation, Formica Capital

” It will soon be a basic basic requirement on banks and financial institutions to be aligned with the science-based criteria behind the Race to Zero. It means halving the emissions from their portfolios every decade towards the net zero goal, as a bare minimum. It is not only a matter of compliance and responsibility for next generations. But even more important - the value growth will happen in sustainable business models, while fossil-based businesses will fall. We are seeing it in cars, energy and circular business models - and the other sectors will follow”, says Johan Falk

The event, scheduled from around 2pm Central European Summer Time until around 6.30pm, is being produced and broadcast live over Twitter by the Stockholm-headquartered climate action platform We Don’t Have Time. The summit is supported by Ericsson, the telecommunications company that is already set to halve its emissions before 2030, endorsed by the Race to Zero.

We Don’t Have Time

Sir David Attenborough tells UN ‘It is too late to avoid climate change’.

Time is running short – but we can get a grip on the climate crisis.

Earth Day 2021: When is it and how are people marking global day of environmental action?