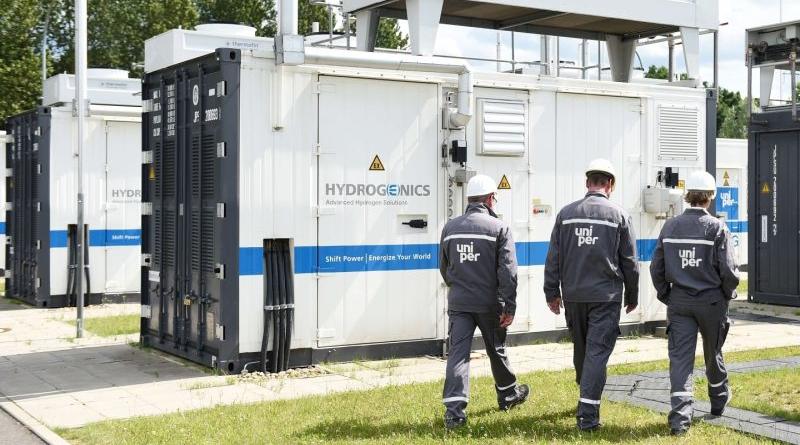 A demonstration plant in Germany that converts wind electricity into hydrogen is probably the most emblematic of a series of pilot projects that could radically transform Europe’s energy landscape in the coming decade.

Back in 2013, German energy utility Uniper achieved a world first – building a power-to-gas plant. Called WindGas, the facility became the first of its kind able to store wind energy in the natural gas grid.

“The name WindGas is because renewable electricity is generated from wind farms,” says Axel Wietfeld, Managing Director of Uniper Energy Storage. “At that time, it was clearly pioneering because it was the first power-to-gas facility in the world,” he told EURACTIV in a phone interview.

In the six years since it started operation, the 2MW capacity alkali-electrolyser at Uniper’s pilot plant has produced more than 8GWh of green hydrogen, Wietfeld says.

The challenge now is to scale up production in order to bring down costs and make green hydrogen competitive. “The focus now should really be on the next steps to scale up power-to-gas production, beyond the pilot projects,” says Wietfeld.

Green hydrogen is a 100% carbon-free source of energy which is widely seen as a central piece of Europe’s future low-carbon energy mix. Using an electrolyser, water is divided into its constituents – hydrogen and oxygen. When the electricity comes from renewables, the hydrogen can be labelled ‘green’ by opposition to ‘grey’ hydrogen which comes from splitting natural gas, a process which releases CO2.

As the EU strives for carbon neutrality, the European Commission firmly believes hydrogen will be among the only gases left in the energy mix by 2050. “Only e-gases, Power-to-X and hydrogen will be present there – for sure,” said Miguel Arias Cañete, the EU Commissioner for climate action and energy, as he presented the EU’s 2050 strategy for energy and climate change last year.

However, getting bigger volumes will take time and industry players say they need regulatory signals and incentives to move green hydrogen production beyond the pilot phase.

“As an industry, we are ready to invest in power-to-gas projects,” Wietfeld says. “What is still an issue for us is the regulatory environment,” he adds.

Power-to-gas is expensive. An electrolyser currently costs between €700-800,000 per megawatt, according to industry experts. This means a 10MW plant would equal about €7 million. And that’s just for the electrolysis. An entire facility, complete with all the piping, grid connections and electronics would cost about twice as much.

According to Wietfeld, a favourable regulatory environment at EU level could help reduce costs. But at the moment, he says network charges in Germany are penalising green hydrogen production. More generally, he says current regulations do not properly remunerate hydrogen producers for the services they bring to the wider energy system.

“Power-to-gas can de-bottleneck the electricity grid, therefore bringing system value that should be remunerated,” Wietfeld says. “But at the moment, it’s the contrary which is happening: we are classified as end customers and therefore we have to pay renewable levies and taxes. And it’s just not fair that those taxes are being transferred from one sector to another. That is something that needs to be addressed both at EU and at national level.”

In short, “we need a hydrogen concept for Germany and for Europe” in order to scale up production, Wietfeld says.

Scale is precisely what French company Storengy is trying to achieve. In Britain, the subsidiary of French utility Engie is spearheading a pilot project called Centurion at the Runcorn petrochemical site, where plastic is produced.

The plant currently runs on grey hydrogen but Storengy plans to replace that with green hydrogen obtained from renewable electricity. And storage is needed in order to supply the petrochemical site when it needs it.

“The plant does not run all the time and we need to run our electrolyser when electricity prices are as low as possible, so that’s why we need storage,” says Cécile Prévieu, CEO of Storengy. According to Prévieu, storage is a prerequisite to supply green hydrogen in large quantities. “Because in the supply chain, when you feed several large industrial sites, you have significant storage needs,” she explains.

According to Storengy, one of the strengths of the Centurion pilot plant is that it is connected to an existing logistics chain, which makes its realisation possible within a relatively short timeframe – less than 10 years.

The petrochemical plant is already connected to a gas storage site by an ethylene pipeline which is no longer in use and can easily be converted to carry 100% hydrogen. That allows it to tap into the hydrogen reserve at any moment according to its needs, Prévieu says.

The next big challenge is to reach the critical size needed in order to reduce costs. “The idea is to have large-scale production that reduces fixed costs and produces competitive green hydrogen by comparison to grey hydrogen obtained by steam reforming,” Prévieu said.

This is where Pévieu believes policymakers can help – by drawing a line between green and grey hydrogen and issuing certificates of origin to reward the renewable sort over the fossil fuel sort. And for that, she says a clear definition is needed of what is meant by green hydrogen.

“Customers need to have a guarantee that what they are buying is green,” Prévieu explains.

“The sooner we have a terminology, the faster we can have a market for green hydrogen that starts emerging,” she told EURACTIV, adding “there has to be an upstream control of hydrogen production processes to certify their origin.”

While Centurion focuses on industrial-scale hydrogen storage and delivery, another pilot project run by Storengy focuses on small-scale storage of locally-produced biogas.

Called Lilibox, the project involves liquefying biomethane produced locally from agricultural waste and storing close to the production site in the form or Bio LNG, which can then be used to power trucks and buses.

The project is in fact no longer a pilot and is about to begin commercial operation. “This is a start-up that will market its products at a competitive price from June 2019,” Prévieu says. “It involves liquefying biomethane that is produced in excess and cannot be injected immediately into the network at the time it is produced,” she explains.

Once liquefied, biomethane is stored in tanks where it can be kept, usually for a few days or weeks. The biogas can then either be reinjected into the local network or used as fuel – typically for local bus services or to power the trucks of nearby farms.

The benefits are mainly local, Prévieu says, but they’re significant. Storing biomethane prevents farmers from having to flare their excess production, which releases carbon. According to Prévieu, it also improves the profitability of anaerobic digestion units at local level, increasing the productivity of biomethane plants by 10-25%.

When it is reinjected into the local gas network, the Bio LNG also prevents network congestion problems at local level, Prévieu points out, reducing the need for local operators to invest in new network.

“The Lilibox acts like a buffer, for example at night or in the summer when there is less consumption,” Prévieu explains, saying this can save millions of euros in avoided network development costs.

The fourth project, called Underground Sun Storage, is the most unexpected – at least, according to its designers.

It all started in 2013 when Austria’s largest gas storage company, RAG Austria AG, opened an experimental underground hydrogen storage site for research purposes. The initial objective was to store hydrogen produced from solar energy in a depleted reservoir and test the infrastructure’s resistance to corrosion.

It’s when they tried injecting liquid CO2 in the reservoir that the researchers got unexpected results.

“We discovered that by adding CO2 in addition to hydrogen in the reservoir, we were able to recreate the natural process of generating methane, or natural gas,” says Stephan Bauer, Project manager at Underground Sun Storage.

Of course, the production of methane with hydrogen and CO2 was described in the literature, Bauer says. “But still we were surprised to see it happening for real. It was a bit magic, I have to say. It would be nice to say it was planned, but I wouldn’t dare say that because it was not,” he told EURACTIV.

A key difference with natural gas, however, is that the CO2 is contained in a closed cycle and does not add to greenhouse gas emissions. “What took millions of years, and earned gas a bad name – fossil – we can now speed up and recreate in a matter of weeks,” Bauer says.

The project’s main objective is to generate hydrogen from solar energy during the summer when sunshine is abundant in Austria. Once converted into hydrogen, solar power can then be stored in a reservoir and injected back into the grid during winter when demand for space heating increases.

“Of course, there are alternative storage technologies, like batteries. But these usually last for a few days, they cannot provide long-term seasonal storage during the whole winter,” Bauer said.

The price of an electrolyser is a big cost parameter, which means storing solar energy as a gas is not commercially viable for now. But it’s not the focus of the project, Bauer explains. “In the future, the challenge is to have a flexbile optimised process” so that the stored hydrogen can provide back-up for electricity in the winter, he explains.

According to Bauer, the project is still at an early stage and it would be premature to make suggestions about what’s needed from a regulatory perspective at EU level. But like Uniper and Storengy, Bauer says regulatory issues will need to be addressed at some point.

“This is a process where clean renewable energy is transformed during summer time and being stored for use in winter time, when the demand is highest. So this is a service. And you need to remunerate that service,” he says.

A big question for regulators, Bauer says, is how green hydrogen should be viewed when it comes to CO2 pricing under the EU Emissions Trading Scheme. “Another is who is in charge: is it the grid operator or should this be left to a market-based operator?”

Once these questions are addressed, the next big challenge will be to make hydrogen production and storage a fully tariff-free regulated process which is ready for the market.

“There are lots questions out there, and the biggest threat I see is politics,” Bauer said.

The Next Frontier In Energy Storage.