Four ways Trump has meddled in pandemic science — and why it matters. 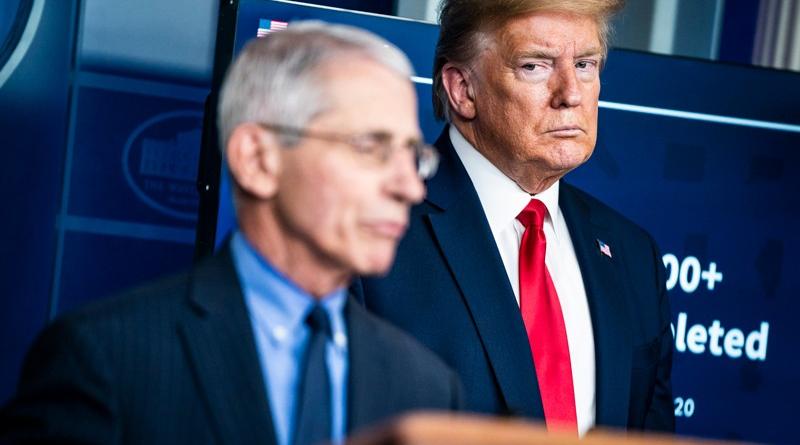 How US President Donald Trump and his administration have silenced scientists, meddled in their reports and ignored their advice.

As the United States votes today on who will be its next president, Donald Trump’s response to the COVID-19 pandemic looms large. One issue that resonates with the research community is the extent to which the current president and his administration have meddled with science and scientific advice during the pandemic — often with disastrous results.

Last month, a coronavirus-crisis sub-committee within the US House of Representatives released a report documenting 47 instances in which government scientists had been sidelined or their recommendations altered. And the report notes that the frequency of meddling has been increasing in the lead-up to the US election.

“It’s hard to express how unbelievably demoralizing this experience has been,” says Diana Zuckerman, president of the National Center for Health Research, a non-profit organization in Washington DC.

If Trump wins a second term, researchers fear what that could mean for public health and the scientific enterprise. If Democratic challenger and former vice-president Joe Biden wins, he’ll have his work cut out for him to restore the reputation of the US science agencies that Trump has damaged.

Nature chronicles some of the most significant cases of meddling so far, and assesses their impact.

At a campaign rally this week, Trump suggested that if he were re-elected, he would fire much-revered and long-standing infectious-disease expert Anthony Fauci, who has led the National Institute of Allergy and Infectious Diseases, part of the National Institutes of Health (NIH), since 1984. Fauci has earned international acclaim as an adviser on HIV/AIDS to six US presidents, and is one of the most-cited researchers in the world.

This display follows a pattern of Trump attempting to silence and discredit Fauci throughout the pandemic: in May, in an unprecedented move, the administration blocked Fauci from testifying about the US pandemic response in front of the Democrat-led House of Representatives’ appropriations committee. “Never in my 30-plus years here in Washington do I recall ever a White House refusing to let an NIH expert testify before Congress,” says Zuckerman. The White House did not respond to Nature’s request for comment.

But Trump’s treatment of Fauci is just one example of the administration’s willingness to sideline its world-famous experts and institutions. The Centers for Disease Control and Prevention (CDC) is a world-renowned health agency and typically plays a major role in tracking and responding to outbreaks. In previous crises, its scientists have issued advice and updates directly to the public through regular media briefings. But compared with previous global-health crises, experts at the CDC have been unusually quiet during the COVID-19 pandemic, according to an analysis by the Union of Concerned Scientists (UCS) that was issued in May.

The report found that during the current pandemic, the CDC has held a much smaller proportion of press events than usual. For instance, during the H1N1 pandemic in 2009, the CDC led all but 3 of the 35 press conferences in the first 13 weeks of the pandemic. In contrast, Trump led close to three-quarters of the 69 press events during the same period of the COVID-19 outbreak. CNN reported that the lack of press briefings by the CDC on the coronavirus was due to pressure from the White House. “It is concerning that the scientists that are doing this great work are unable to talk,” says Anita Desikan, a research analyst at the UCS’s Center for Science and Democracy. The CDC did not respond to Nature’s request for comment.

The politicization of the pandemic has even driven some career government scientists out altogether. NIH scientist Rick Bright resigned from his position last month, citing a lack of meaningful duties and frustration over the Trump administration’s disregard for scientific expertise. In April, Bright was removed from his post as the director of the Biomedical Advanced Research and Development Authority, which strategically awards financial support to drugs and treatments to help to fight disease outbreaks. In an official whistle-blower complaint, he alleged that his removal was retaliation for criticism of the administration’s COVID-19 response.

Hand-in-hand with the silencing of agency scientists is a pattern of political appointees overriding advice from those scientists. Nowhere has this been more apparent than at the CDC. Axios reported in late September that Robert Redfield, the CDC’s director, had attempted to extend a ban on passenger cruise ships into 2021. Cruise ships were the sites of some of the first major outbreaks of COVID-19 during the pandemic, and public-health experts have warned about their vulnerability to the spread of the virus. But the Trump administration ultimately overruled Redfield; as of 31 October, cruise ships are allowed to sail from the United States once again.

In August, now-removed guidance appeared on the CDC’s website that stated that asymptomatic people no longer needed to be tested for the virus, counter to the recommendations of public-health experts. A senior CDC official told CNN that this guidance was issued “from the top down”; it was eventually reversed after public outcry. Officials outside the CDC have allegedly inserted their own documents on the CDC website in a move that Samuel Groseclose, a retired epidemiologist who spent 27 years at the agency, calls “bizarre”.

The Trump administration has also attempted to meddle with a mainstay of the American public-health community: a weekly, peer-reviewed report that’s meant to facilitate the rapid release of epidemiological data. In September, Politico reported that political appointees in the Department of Health and Human Services, which oversees the CDC, had attempted to delay or halt the release of and retroactively edit the CDC’s Morbidity and Mortality Weekly Report (MMWR). Officials also demanded oversight before some results were published. The MMWR is “revered in the public-health community”, says Liz Borkowski, a public-health researcher at George Washington University in Washington DC, adding that she was “utterly horrified” to hear of the attempted meddling.

CDC did not respond to Nature's queries about interference in the MMWR. It is still unclear how many reports were ultimately impacted.

Sonja Rasmussen, an epidemiologist at the University of Florida in Gainesville, says even the implication that the MMWR was tampered with could damage its credibility — another casualty of meddling in pandemic science. She spent 20 years at the CDC and was the editor-in-chief of the MMWR for 3 of them; she and 2 former MMWR editors-in-chief penned a September editorial in the Journal of the American Medical Association calling to safeguard the editorial independence of the report.

Convalescent plasma, antibody-laden blood plasma from someone who survived COVID-19, was a promising treatment early in the pandemic. In August, the Trump administration leaned heavily on Food and Drug Administration (FDA) commissioner Stephen Hahn to issue an Emergency Use Authorization (EUA) for the treatment despite a lack of solid evidence that it helps people, as reported by The New York Times and The Washington Post. The FDA issued the EUA, making plasma available to a wide swath of the US population. But evidence from a clinical trial in India1, posted in September, suggests that the treatment has no effect on patient outcomes. Earlier in the pandemic, the agency had to revoke its authorization of hydroxychloroquine, which Trump had touted as a “game changer” for COVID-19, because it, too, was subsequently shown to be ineffectual at treating the disease.

Experts fear that the perception of interference will undermine public confidence in the FDA at a time when it is desperately needed. It could have “long-term consequences”, says Marta Wosińska, the deputy director of Duke University’s Margolis Center for Health Policy in Durham, North Carolina, who spent 7 years at the FDA. Wosińska and other public-health experts are worried about how this erosion of public trust will affect peoples’ willingness to get a COVID-19 vaccine once the FDA approves one. Low vaccination rates will leave the population susceptible to continued COVID-19 outbreaks, endangering high-risk populations who are unable to get vaccinated.

To many public-health experts, it is clear that the Trump administration’s persistent meddling is responsible for the disastrous way in which the pandemic has unfolded in the United States. “Some of it is probably real and some of it is probably supposition,” Georges Benjamin, the executive director of the American Public Health Association in Washington DC, says of the media reports about interference. “But at the end of the day, this has been one of the worst risk-communications processes that I’ve ever seen. And I think that’s tragic.”

54 Million People in the U.S. May Go Hungry During the Pandemic — Can Urban Farms Help?