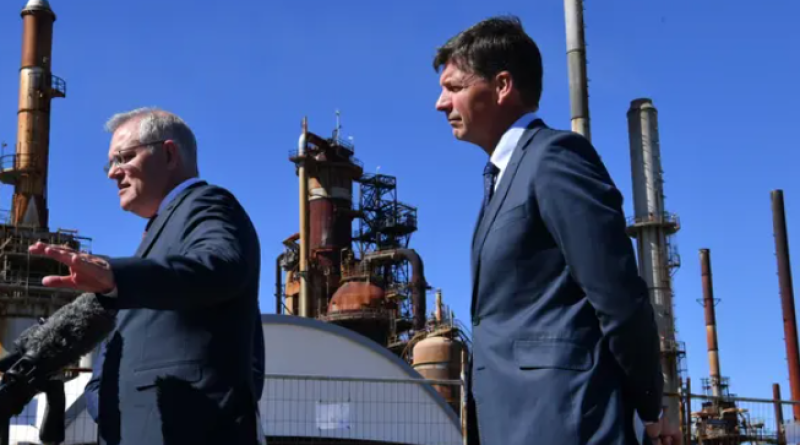 Scott Morrison’s loving embrace and financial backing of the gas industry has been a defining feature of his prime ministership. Hit with a historical pandemic, Morrison chose gas – not renewables – to fire an economic recovery.

Plans to create a new hydrogen export industry will use gas. The government has – anachronistically in the face of the climate crisis – given fossil fuel a central role in reaching net zero which it claims to have a plan for, but in reality doesn’t. Unlike coal, gas doesn’t lend itself to being held up in parliament. But you suspect if Morrison could have, he would have. “We’ve got to get the gas,” he said in January 2019. His energy minister, Angus Taylor, has claimed exporting gas will cut emissions in the region.

All of this flies in the face of multiple scientific studies and the International Energy Agency which all say there can be no more new gas developments if (and that “if” should really be in bold and CAPS) the worst of the climate crisis is to be avoided.

But Morrison, Taylor and the gas industry consistently reach for a “get-out-of-catastrophe free” card in this game of Monopoly (climate crisis edition). That card is carbon capture, utilisation and storage (CCUS) – an expensive, complex and serially underperforming approach to grab CO2 where it’s being released and then lock it away, usually in geological formations underground.

This week the chair of the Australian Petroleum Production and Exploration Association (Appea), Ian Davies, told his annual conference the industry “must meet” the challenge of decarbonisation, saying “the technology that’s critical for us to achieve this at scale is carbon capture, utilisation and storage – a proven technology”.

While Davies said it was an approach first used by Exxon in the 1970s, the reality is that after billions of dollars in investment globally, this column has written how CCUS projects still only have the ability to capture about 0.3% of the emissions caused each year by burning fossil fuels.

Australia only has one commercial carbon capture and storage facility operating – the Chevron-led Gorgon project at Barrow Island off Western Australia’s Pilbara coast. Gorgon is the world’s biggest carbon capture project that is dedicated to storing the CO2, which is different from the handful of larger projects where the CO2 is used to push more oil out of the ground.

Davies told the conference Gorgon had stored 6m tonnes of CO2 since it started in mid-2019.

This statement needs more than a little bit of qualification, because Gorgon has missed government-set targets for capturing CO2, and as a percentage of the emissions that will ultimately be released from that project, it can only marginally reduce the amount of extra CO2 that will be added to the atmosphere.

Chevron Australia’s director of operations, Kory Judd, was a little less emphatic earlier this week, telling Reuters: “We’ve still got a ways to go to meet the commitment to what we have the injection system designed for. What we’re doing is trying to learn our way through how you inject CO2 into the reservoirs, how do they respond, then how do you do that reliably and how do you do that and get to the point to meeting the commitments that you’ve got.”

At Gorgon, the CO2 that comes up with the gas when it’s drilled in offshore fields is extracted and injected underneath Barrow Island.

But there have been several costly technical issues. In the last financial year, Gorgon injected 2.17m tonnes of CO2 – about 1m tonnes short of its target. After the CO2 is extracted, what’s left is mostly methane to be compressed to liquefied natural gas (LNG) and transported overseas where it is burned, releasing far more CO2 than is captured.

How much more? One analysis from the Australia Institute suggested that if Gorgon was both injecting and producing gas at full capacity then over a five-year period, about 260m tonnes of CO2 will be emitted and only 20m tonnes captured.

No matter what the claims, carbon capture and storage is not working at anywhere close to a scale that would significantly lower emissions – despite the billions in taxpayers’ cash thrown at it over the years.

During his speech, the Australian Petroleum Production and Exploration Association (Appea) chair, Ian Davies, repeated a claim that Australia’s LNG had the potential to lower emissions “in importing countries by around 166m tonnes of carbon dioxide each year by replacing higher-emission fuels”.

Appea told this column the 166 Mt figure is from the government’s long-term emissions reduction plan report. But that report does not say how the figure is calculated – just that it came from unpublished analysis by the department of industry.

Temperature Check has asked the department how the figure was reached, but was told it couldn’t respond because the government was in caretaker mode.

But when Taylor made a similar claim in 2019, the department said it was based on the assumption that all of the LNG exported by Australia was burned for power (but didn’t say what kind of gas plant it was burned in, as some are more efficient than others). They then compared that to the same amount of power if it was generated from burning coal.

For this figure to be credible, all of the LNG exported would need to be burned and this would need to be displacing the use of coal, rather than just satisfying Asia’s rising demand for energy.

“The figure is simply wrong. The idea that LNG is substituting coal is wrong. It’s not occurring,” said gas industry finance analyst Bruce Robertson of the Institute for Energy Economics and Financial Analysis, a thinktank tracking the transformation of the world’s energy systems.

Robertson said some LNG in Australia’s major markets of China and Japan is used for heating, not power generation. LNG is actually being displaced by renewables, he said, and most new LNG power plants in Asia are to cover short-term gaps in supply and are less efficient than those that have traditionally provided baseload power.

Also not considered, said Robertson, is that if only about 2% of methane gas leaks from pipes along the supply chain then the climate impact of that potent greenhouse gas renders LNG just as bad, or worse, than coal.

In what the Morrison government described as the dawn of a new energy export industry earlier this year, Morrison and Taylor were effusive over a world-first shipment of so called “clean hydrogen”.

At the time, government media releases said if the pilot Hydrogen Energy Supply Chain project went commercial it would turn Latrobe Valley coal into hydrogen and “save” 1.8m tonnes of CO2 a year (which, by the way, is an unimpressive one-ninth of the emissions of the coal=fired power station that’s next door to the project).

This column had asked HESC and the government how that 1.8 Mt was calculated, but got no answer. But now we know. Firstly, the government relied on information provided by HESC.

In freedom of information documents highlighted in a new report from the Australia Institute on the project, HESC said it simply compared two different methods of making hydrogen – one that uses gas in a process called steam methane reforming, and its own approach that gasifies coal.

Actually, that’s not quite it.

That is not a fair comparison.

On Sunday, the treasurer, Josh Frydenberg, repeated a claim that Australia’s record on emissions was much better than Canada and New Zealand, and better than the average of OECD countries.

This is a claim this column has explored before. Putting aside falls in emissions from a slowing of land clearing in the last three decades – which the federal government has had nothing to do with – Australia’s emissions are not better than the OECD average.

A detailed ABC Fact Check on Frydenberg’s most recent claims around Australia’s comparative record – one repeated on social media posts by the Liberal party – also found it “misleading”.