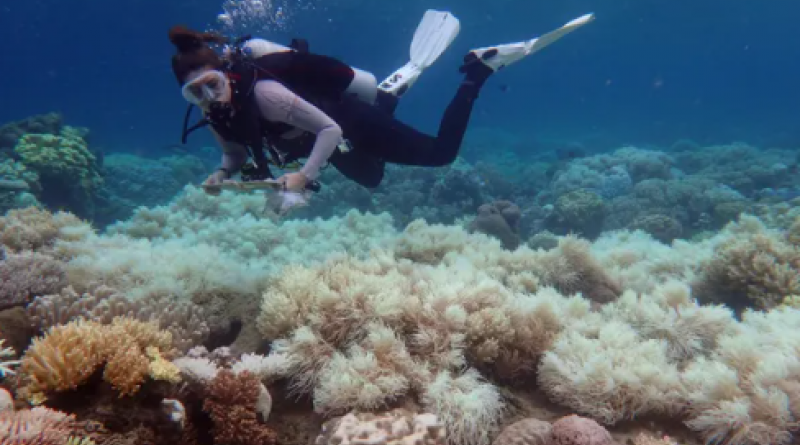 Group of reef and climate scientists say world heritage warning merited and Australia has not ‘pulled its weight on emissions’.

Five of the world’s leading reef and climate scientists have thanked Unesco for recommending the Great Barrier Reef be listed as world heritage “in danger”, saying it was the right decision in part because Australia had not “pulled its weight” in reducing emissions.

The group of scientists, including the Australian professors Ove Hoegh-Guldberg and Terry Hughes, wrote to the UN body on Thursday saying the recommendation to downgrade the 2,300-km reef system’s world heritage status was “the right decision”.

The Morrison government has accused Unesco of “blindsiding” it and indicated it would undertake a lobbying campaign before the 21-member world heritage committee considers the recommendation at a meeting in China starting on 16 July.

Unesco has denied it misled the Australian government before the recommendation was made public.

The scientists said the body had shown leadership in recognising the threat of climate change to the reef’s world heritage properties.

“Safeguarding the reef requires effective global action to reduce carbon emissions. Yet Australia has so far not pulled its weight in this global effort.

“We therefore greatly appreciate Unesco’s draft recommendation for Australia to urgently address the threat of climate change and welcome the draft report’s recognition that 1.5C [of global heating] is widely recognised as a critical threshold.”

The scientists said they acknowledged the Australian and Queensland governments had made efforts to address local threats to the reef, including sediment and nutrient pollution at inshore coral reefs, but Unesco was correct to note “with the utmost concern” that water quality targets in the governments’ 2050 plan had not been met.

“The Great Barrier Reef is one of the most beautiful, biodiverse and precious places on Earth. We stand ready to help support Unesco’s efforts to secure the future of this global icon,” they wrote.

Other signatories to the letter are Prof Andréa Grottoli, president of the International Coral Reef Society, Prof Johan Rockström, the director of the Potsdam Institute for Climate Impact Research, and Dr Sylvia Earle, an oceanographer and chair of Mission Blue, which aims to achieve 30% protection of oceans by 2030.

In an opinion piece in the Australian on Wednesday, the federal environment minister, Sussan Ley, said she was stunned by the draft recommendation by Unesco’s world heritage committee reef, and repeated her suggestion the process had been politicised.

She said an “in danger” listing was in effect asking a country to change or accelerate the improvement of its management of a world heritage site.

“Are the [Unesco] advisers seriously suggesting Australia can single-handedly change the emissions trajectory of the whole world?” she wrote.

“Unesco representatives admit they want to sound an international warning note about the dire fate that awaits all countries if global warming is not halted. Australia shouldn’t be the poster child of a wider agenda.”

She said the World Heritage Centre had advised officials in May that none of Australia’s world heritage sites would be considered for “in danger” listing this year, and noted 11 other countries had joined it in writing to Unesco to express concern about “a broader lack of transparency and proper process”.

Unesco leaders have denied Australia was given an assurance the reef would not be considered in danger, or that the recommendation had been politicised. Dr Mechtild Rössler, director of the World Heritage Centre, last week told reporters that many governments misunderstood the “in danger” list.

“It is not a red list that ends up with less tourism, but it is really a call for action and that is the fundamental idea,” she said. The whole world needs to know there’s a site that’s under threat and we all have a duty to preserve [it] for generations to come.”

The letter from 12 countries has been interpreted by one former Australian world heritage official as the beginning of Australia’s promised lobbying effort to fight Unesco’s recommendation.

The prime minister, Scott Morrison, last week described Unesco’s process as “appalling” and said Australia had been “talking to our friends”.

Hoegh-Guldberg and Hughes, both from the ARC Centre of Excellence for Coral Reef Studies, said in a statement an “in danger” listing would focus attention on how to further limit damage to the reef.

“It presents a challenge to all nations to immediately reduce greenhouse gas emissions,” Hughes said.

A Unesco spokesperson said it welcomed the letter “from these distinguished and internationally renowned scientists”. They said it confirmed the technical analysis presented in its report.