From Great Salt Lake to ‘Puddle’: How the Climate Crisis and Water Diversions Are Harming an Icon 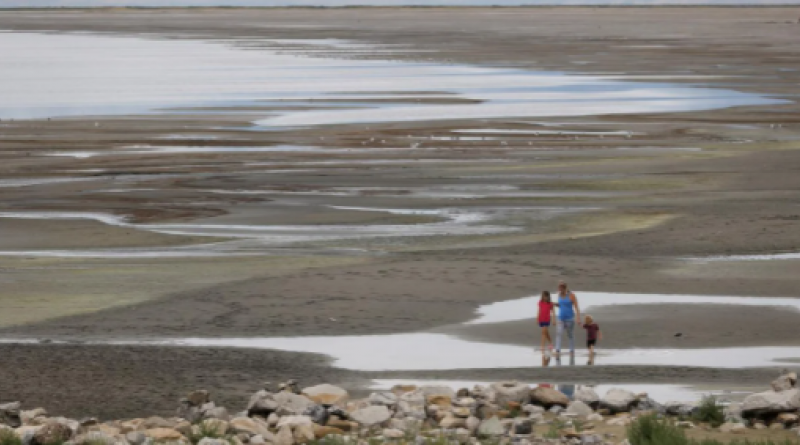 In July, the water levels of Utah's iconic Great Salt Lake fell to a record low.

But this wasn't an isolated incident. A combination of the climate crisis and human water usage have reduced the lake so utterly that The Salt Lake Tribune and AccuWeather announced Monday that they were redrawing their maps to show how how much the lake has really changed.

"The need to redefine the boundaries of the Great Salt Lake is a striking reminder of the profound impact of record-low water levels to the delicate and complex ecology of the Great Salt Lake and its wide-ranging importance to the people and economy of Utah," AccuWeather chief meteorologist Jonathan Porter told The Salt Lake Tribune. "AccuWeather is committed to accurately depicting the boundaries of lakes to highlight the impact of climate change on our changing world."

Historically, the surface of the Great Salt Lake sits at 4,200 feet above sea level, which is what maps formerly showed and is also the sweet spot for the health of the lake and the creatures that live there.

Now, the lake is "a puddle of its former self," as The Salt Lake Tribune put it, sitting at 4,190.6 feet above sea level, or about 10 feet lower than typical. It also only contains 7.7 million acre feet of water, which is about half of the historical average.

This is a problem, because the lake is an important ecosystem that provides many benefits to Utah's animals, humans and economy. The edges of the lake are home to brine shrimp that provide food for migratory birds, Yahoo News explained. When the lake shrinks, these shrimp and the animals that eat them are at risk. In fact, the wetlands surrounding the lake are one of the most important migratory bird habitats in North America, welcoming around 250 species, columnist Robert Gehrke wrote for The Salt Lake Tribune.

When the lake dries, it also threatens human health because the dry, exposed lake bed is fuel for dust storms. When water levels fall, the marinas also become unusable by boaters, which is a problem for recreation and other industries.

The lake's shrinking is partly due to water management issues. In fact, as Gehrke observed, a study found that the lake would be 11 feet higher if it weren't for water diversions upstream for agriculture and residential uses. Currently, Utah allocates water rights based on "beneficial use," meaning right holders have to put it to an agricultural or economic purpose. Gehrke argued that the state should start prioritizing water for conservation as well.

"If we make conservation a priority or at least on equal footing as agriculture, conservation groups and governments can start dedicating water rights for the lake," he wrote.

The lake's shrinking is also an example of how climate change and drought can impact water systems.

"As we change the climate, we have learned over the last many decades that we are also going to fundamentally change how much water we get and where we get it, the intensity of storms, rainfall patterns, the severity of droughts and floods, the demand for water from crops and from our natural vegetation," climate scientist Peter Gleick told Yahoo News.

Humans to blame for warming lakes