Greenwashing is driving our descent into climate catastrophe. But we can stop it 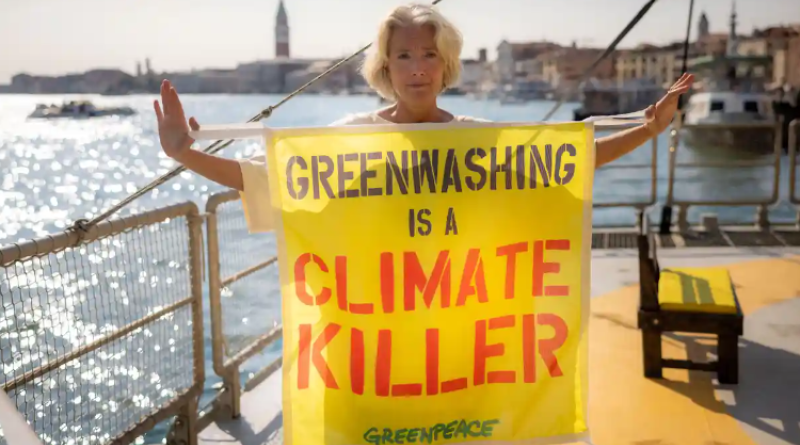 Gondola trips are a traditional part of visiting Venice for those who can afford the steep tourist prices, but I went a little off-script on a recent visit and chose a different, but equally iconic, vessel. We Are Here Venice, an NGO that promotes the safeguarding of a city deeply affected by climate breakdown and countless human-made activities, invited me on board the Greenpeace ship the Rainbow Warrior, the purpose of whose visit was anything but touristic.

I have taken part in two Arctic tours with Greenpeace: one on the Esperanza (now defunct, not my fault!) and another on the Arctic Sunrise. I had previously sailed with two of the crew who are now on the Rainbow Warrior, and there they still were, fighting for climate justice around the world.

A couple of weeks ago, as Britain beat not only its own all-time temperature record, but Cuba’s, Singapore’s and Panama’s, there were still people shouting that it was all perfectly normal and just an ordinary sunny day. What sort of fantasy world do these people live in, and who built it for them? My trip to Venice helped me answer this question.

I didn’t know it when I arrived, but Greenpeace activists were about to stage a protest that involved moving through the canals of the lagoon city on traditional boats, while carrying the logos of major European oil and gas firms that use greenwashing – marketing techniques that try to convince us they are environmentally friendly when the opposite is true : they want to keep us hooked on fossil fuels. This is killing the planet. The activists ironically announced it as the Last Tour of Venice, as the city is at risk of submersion due to climate impacts in the Mediterranean region, like the ones we’ve been recently witnessing with record-breaking heatwaves and wildfires raging across the region.

Last October, Greenpeace and another 30 organisations launched a European citizens’ initiative calling for a new law banning fossil fuel advertising and sponsorship in the EU, similar to what happened with tobacco at the beginning of this century. If the petition collects a million signatures in a year, the European Commission is obliged to respond.

Why is such a law important? Now, with widespread public support for climate action and the scientific community unreservedly pointing at the fossil fuel industry as largely responsible for the climate crisis, the oil and gas firms, which have for decades purposely slowed climate action, are at their most vulnerable. The industry is clinging on to advertising and sponsorship as one of the last ways of staying afloat.

“Delay and deceive” is the new denial. Fossil fuel companies are pumping millions into greenwashing while making meaningless net zero promises and introducing false “solutions”, in order to gloss over their decades of destruction. They are falsely painting themselves as allies and extending the deadline of their obsolete business.

Scientists have had enough. For the first time, this year an Intergovernmental Panel on Climate Change report exposed the disinformation strategy by saying: “Who dominates the debate on media, and how open the debate can be, varies significantly across countries based on participants’ material and technological power. Fossil fuel industries have unique access to mainstream media via advertisements, shaping narratives of media reports and exerting political influence in countries like Australia and the US.”

Oil and gas companies buy prestige by sponsoring museums, influencing the sphere of knowledge by putting money into universities, and gaining popularity when their logos are associated with sport. They invest a lot in buying a social licence to continue with business as usual by creeping into our everyday lives and disguising the damage. We need to urgently kick them out of our brains, hearts and communities.

In the last year, thanks to relentless grassroots work, Harvard University said it would phase out its fossil fuel holdings. In the UK, the National Portrait Gallery and Scottish Ballet confirmed they wouldn’t do further sponsorship deals with BP. Tennis Australia has dropped gas firm Santos as a partner.

At the beginning of this century the EU banned tobacco advertising and sponsorship after it was recognised they increased consumption and hid health warnings. Now, with the overwhelming scientific evidence on climate breakdown and its indisputable link to fossil fuel companies, it is time to ban fossil fuel propaganda for being deadly and criminal, and driving us inexorably towards climate catastrophe. Activism works. Together we can tell people in power how we want to live, and what must change.

What ‘greenwashing’ is (and how to spot it)

Greenwashing UK fashion firms to be named and shamed by watchdog