Greta Thunberg, not Donald Trump, is the true leader of the free world. 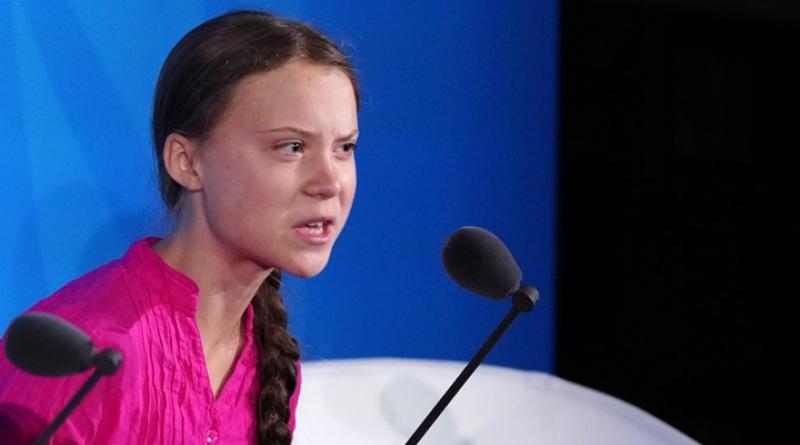 Greta Thunberg is the sixteen year old Swedish girl who a year ago began a lone school strike for climate action, spending every Friday striking from school as a form of protest. Owing to her unapologetic persistence and moral clarity, she was given an opportunity to address the UN Climate Summit in New York this week, where she admonished global leaders who have enabled a policy of delay and inaction when it comes to the climate crisis.

In response, Donald Trump sarcastically quote-tweeted her admonitions of mass extinction, suffering people and collapsing ecosystems with a sneering quip ("a very happy young girl looking forward to a bright and wonderful future. So nice to see!" ).

Because Trump is not in any way a leader, it was perhaps only a matter of time before the man in control of the largest military in the world deployed the only weapon he's ever had the courage to wield, a tweet, in order to attack a child. Yes, the current President of the United States uses social media to cowardly bully whomever he pleases, because apparently the real work of running the country is too hard and unrewarding.

Greta Thunberg has, in the space of a year, shown more leadership potential than the President has in his entire life. She has united her generation and turned her lone school strike for climate first into a movement—"Fridays For Future"—and now into a global protest 4 million souls strong. While the President remains content to be reduced to a sniveling online troll, Greta has taken to the streets and organized for political action. Who exactly is the child here?

The center of global political power has now shifted—dramatically and profoundly. The leader of the free world once sat in the Oval Office. Now she stands surrounded by thousands of her peers, demanding action, fighting to preserve this planet for her and future generations. It is to this sixteen year old girl, Greta Thunberg, that we must now look for moral leadership.

Twitter trolls once had to hide in the anonymity of their dens while lashing out and building an online world even more grotesque and unwelcome to women, people of color and other marginalized groups than the inequality-laden actual world. Now it is the Oval Office where a twitter troll hides--from accountability, lashing out at a single young woman doing the one thing he absolutely cannot abide: a refusal to smile politely and accommodate his gaslighting and abuse, declining to accept an untenable situation, and refusing to be quiet in the face of injustice.

Most importantly, Greta Thunberg refuses to pretend that the status quote is acceptable. Because it's not. Her clear-eyed understanding of the predicament we face precludes her bending to the will of the antiquated social expectation that young women be obliging rather than angry, deferential rather than indignant. And of course seen but not heard.

Climate change is the defining challenge of our time. It is already taking millions of lives and costingtrillions of dollars. We no longer have the luxury of sugar-coating the unfolding crisis with happy platitudes, condescending commentary, and crocodile tears about students "missing school" as they fight to preserve their future.

By throwing off the restraints of gendered expectations, Greta, like the many other young womenleading the youth climate movement, is proving that change happens at the speed we make it happen. She is proving that a better world is possible, that humanity faces a great challenge but none so big as the expectations we put on ourselves.

By turning his administration over to polluting interests and foreign state actors tied to them, the office of the Presidency has abandoned its former role, under President Barack Obama, as a global leader on climate. In the resulting vacuum, cities, states, companies, and other institutions have stepped up and kept America from falling too far behind in its climate commitments.

But the lack of moral leadership coming from the man who thinks the phrase "bully pulpit" is to be taken literally is not one that any CEO or Governor can fill. Fortunately, a new generation is rising. They are free from the pernicious expectation that polluters and fossil fueled politicians will act on climate without the force of public pressure. Nor can they be fooled into taking the trolls seriously—whether they're living in their parents' basement or at 1600 Pennsylvania Ave.

Unsurprisingly, we have seen a massive deployment of trolls and botsin the weeks leading up to the Youth Climate Strikes and UN Climate Summit, reaching fever pitch during this "climate week". Fossil fuel interests and bad state actors use these troll armies to sow discord and dissent, promote disengagement and delay. They aren't trying to build a better world. They're simply seeking to distract and disempower those who are. It's best not to take the bait, and Greta Thunberg has thus far shown a remarkable resistance to them, despite repeated prodding by media outlets desperate to play up a feud between the President and the Pigtails.

That doesn't mean our Troll in Chief's sarcastic attack went unnoticed however. Instead, Greta chose the wise route, changing her twitter bio to mock the bitter old man's back-handed compliment: "A very happy young girl looking forward to a bright and wonderful future."

And that, truly, is so nice to see!

Continue on, children, and lead. Nothing less than the future of our planet lies in the balance.

Michael E. Mann is Distinguished Professor of Atmospheric Science at Pennsylvania StateUniversity. His most recent book, with Tom Toles, is The Madhouse Effect: How Climate Change Denial Is Threatening Our Planet, Destroying Our Politics, and Driving Us Crazy (Columbia University Press, 2016).

The views expressed in this article are the author's own