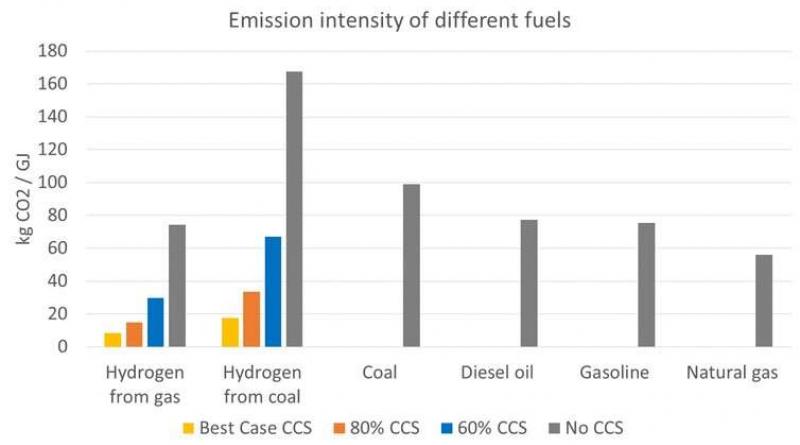 Using hydrogen as a clean fuel is an idea whose time may be coming. For Australia, producing hydrogen is alluring: it could create a lucrative new domestic industry and help the world achieve a carbon-free future.

The national hydrogen strategy released last month argues Australia should be at the forefront of the global hydrogen race. Led by Chief Scientist Alan Finkel, the strategy takes a technology-neutral approach, by not favouring any one way of making "clean" hydrogen.

But it matters whether hydrogen is produced from renewable electricity or fossil fuels. While the fossil fuel route is currently cheaper, it could end up emitting substantial amounts of carbon dioxide.

Not all 'clean' hydrogen is the same

Hydrogen can be produced using electricity through electrolysis, which splits water into hydrogen and oxygen. When renewable electricity is used, this does not produce any carbondioxide and is known as green hydrogen.

Hydrogen can also be produced from coal or gas. This process releases carbon dioxide. Most hydrogen produced today is made this way.

Some—but critically, not all—carbon dioxide from this process can be trapped and stored in underground reservoirs—a process known as carbon capture and storage (CCS).

But CCS is technically complex and expensive. Only two plants producing hydrogen from fossil fuels currently use it: one in Canada, with a carbon dioxide capture rate of 80%, and one in the US with a lower retention rate.

In Australia, the only operating large-scale CCS project is Chevron's Gorgon gas (not hydrogen) project in Western Australia. After a significant delay, and three years since the project started supplying gas, carbon capture and storage began this year.

High carbon-capture rates are not assured

The hydrogen strategy uses the term "clean hydrogen" for hydrogen produced from renewable electricity, and from coal or gas with carbon capture. And it assumes a "best-case" scenario where 90-95% of carbon dioxide is captured from fossil fuels.

Such rates are technically possible, but have not been achieved to date. Lower capture rates are not examined in the strategy.

At 90-95% capture rates, coal- and gas-based hydrogen is much less carbon-intensive than traditional fossil fuel uses. But a capture rate of 60% means hydrogen from coal has a similar emissions-intensity to burning natural gas directly.

The national strategy does not describe a mechanism to ensure best-case capture rates are met. Production of hydrogen might ramp up much faster than the facilities required to capture emissions, allowing large amounts of greenhouse gas to enter the atmosphere—similar to the Gorgon case.

Another risk is that carbon capture will not be able to achieve the best-case rates for technical or cost reasons.

Countries including Japan, South Korea and Germany are exploring the possibility of using hydrogen in a range of ways, including in power generation, transportation, heating and industrial processes.

Some future importers may not care how cleanly our hydrogen is produced, but others might.

To illustrate why carbon-free exports matter, we calculated emissions if Australia produced 12 million tonnes of hydrogen for export per year—equivalent to about 30% of our current liquified natural gas exports and in line with production estimates in the national strategy.

It would require roughly 37 million tonnes of natural gas or 88 million tonnes of coal. If 90% of carbon dioxide was captured, emissions from gas would total 1.9% of Australia's current (2018) annual greenhouse gas emissions, or 4.4% using coal.

If only 60% of the carbon dioxide was captured, hydrogen from gas and coal would account for an additional 7.8% and 17.9% of current national emissions respectively—making it much harder for Australia to achieve existing and future emissions targets.

Right now, producing hydrogen from fossil fuels is cheaper than from renewables, even with carbon capture and storage.

Australia also has large and ready reserves of brown coal in Victoria's Latrobe Valley that will not be used by the declining coal-fired power industry. Captured carbon could be stored under Bass Strait. And the nation's plentiful gas reserves could be turned into hydrogen, in addition to or partly replacing liquefied natural gas exports. So, it is unsurprising that the national strategy left all options on the table.

However establishing hydrogen production facilities with carbon capture would mean huge spending on equipment with very long lifetimes. This is risky, as the capital would be wasted if the market for emissions-intensive hydrogen collapsed, either through public attitudes or a global imperative to move to zero-emissions energy systems.

The world is already far off the pace needed to meet its emissions reduction targets, and must ultimately get to net-zero to prevent the worst climate change impacts.

Australia should invest in research and development to make green hydrogen cheaper. This requires driving reductions in the cost of electrolysis, and further reductions in large-scale renewable energy production. It could lead to big benefits for the climate, and Australia's future export economy.

*Title photo:Emissions intensity of fuels with and without CCS. Hydrogen numbers are for production only; emissions intensity is higher for exported hydrogen. Source: authors’ calculations, using data from the International Energy Agency and US Energy Information Administration

Enough ambition (and hydrogen) could get Australia to 200% renewable energy.

Renewable Hydrogen In The Heart Of Coal Country.