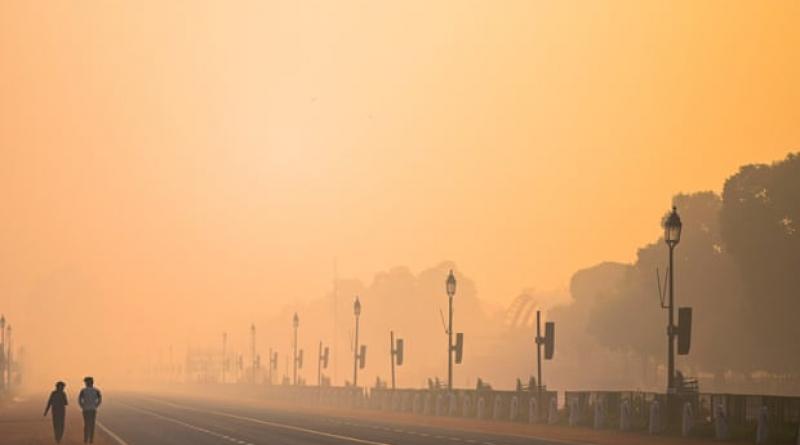 Pollution from power plants, vehicles and other sources accounted for one in five of all deaths that year, more detailed analysis reveals.

Air pollution caused by the burning of fossil fuels such as coal and oil was responsible for 8.7m deaths globally in 2018, a staggering one in five of all people who died that year, new research has found.

Countries with the most prodigious consumption of fossil fuels to power factories, homes and vehicles are suffering the highest death tolls, with the study finding more than one in 10 deaths in both the US and Europe were caused by the resulting pollution, along with nearly a third of deaths in eastern Asia, which includes China. Death rates in South America and Africa were significantly lower. 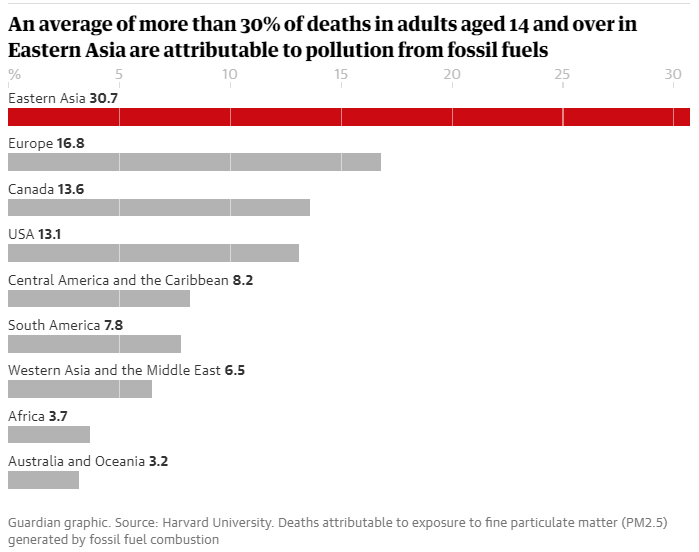 The enormous death toll is higher than previous estimates and surprised even the study’s researchers. “We were initially very hesitant when we obtained the results because they are astounding, but we are discovering more and more about the impact of this pollution,” said Eloise Marais, a geographer at University College London and a study co-author. “It’s pervasive. The more we look for impacts, the more we find.”

The 8.7m deaths in 2018 represent a “key contributor to the global burden of mortality and disease”, states the study, which is the result of collaboration between scientists at Harvard University, the University of Birmingham, the University of Leicester and University College London. The death toll exceeds the combined total of people who die globally each year from smoking tobacco plus those who die of malaria.

Scientists have established links between pervasive air pollution from burning fossil fuels and cases of heart disease, respiratory ailments and even the loss of eyesight. Without fossil fuel emissions, the average life expectancy of the world’s population would increase by more than a year, while global economic and health costs would fall by about $2.9tn.

The new estimate of deaths, published in the journal Environmental Research, is higher than other previous attempts to quantify the mortal cost of fossil fuels. A major report by the Lancet in 2019, for example, found 4.2m annual deaths from air pollution coming from dust and wildfire smoke, as well as fossil fuel combustion.

This new research deploys a more detailed analysis of the impact of sooty airborne particles thrown out by power plants, cars, trucks and other sources. This particulate matter is known as PM2.5 as the particles are less than 2.5 micrometers in diameter – or about 30 times smaller than the diameter of the average human hair. These tiny specks of pollution, once inhaled, lodge in the lungs and can cause a variety of health problems.

“We don’t appreciate that air pollution is an invisible killer,” said Neelu Tummala, an ear, nose and throat physician at George Washington University School of Medicine and Health Sciences. “The air we breathe impacts everyone’s health but particularly children, older individuals, those on low incomes and people of color. Usually people in urban areas have the worst impacts.”

Instead of solely relying upon averaged estimates from satellite and surface observations that account for PM2.5 from a range of sources, the researchers used a global 3D model of atmospheric chemistry overseen by Nasa that has a more detailed resolution and can distinguish between pollution sources. “Rather than rely on averages spread across large regions, we wanted to map where the pollution is and where people live, so we could know more exactly what people are breathing,” said Karn Vohra, a graduate student at University of Birmingham and study co-author.

The researchers then developed a new risk assessment based on a tranche of new research that has found a much higher mortality rate from fossil fuel emissions than previously thought, even in relatively low concentrations. Data was taken from 2012 and then also 2018 to account for rapid improvements in air quality in China. Deaths were counted for people aged 15 and older.

The results show a varied global picture. “China’s air quality is improving but its fine particle concentrations are still staggeringly high, the US is improving, although there are hotspots in the north-east, Europe is a mixed bag and India is definitely a hotspot,” said Marais.

The death toll outlined in the study may even be an underestimate of the true picture, according to George Thurston, an expert in air pollution and health at the NYU school of medicine who was not involved in the research. “Overall, however, this new work makes clearer than ever that, when we talk about the human cost of air pollution or climate change, the major causes are one and the same – fossil fuel combustion,” he said.

Philip J Landrigan, director of the program for global public health and the common good at Boston College, said: “Recent research has been exploring the use of newer exposure-response functions, and several recent papers that use these newer functions have produced higher estimates of pollution-related mortality than the Global Burden of Disease analyses.” He added: “I consider it important that different risk assessment models are now being developed, because their development will force re-examination of the assumptions that underlie current models and will improve them.”

Ed Avol, chief of the environmental health division at the University of Southern California (USC), said: “The authors have applied improved methodologies to better quantify exposures and better document health outcomes in order to reach the unsettling (but not surprising) conclusion that fossil-fuels-combustion-related air pollution is more damaging to global human health than previously estimated. The remote satellite imagery exposure specialists and health epidemiologists on the research team are highly competent investigators and among the most talented scholars in this dynamic field.”

“Fossil fuels have a really large impact upon health, the climate and the environment and we need a more immediate response,” said Marais. “Some governments have carbon-neutral goals but maybe we need to move them forward given the huge damage to public health. We need much more urgency.”