‘It’s like hunting aliens’: inside the town besieged by armadillos. 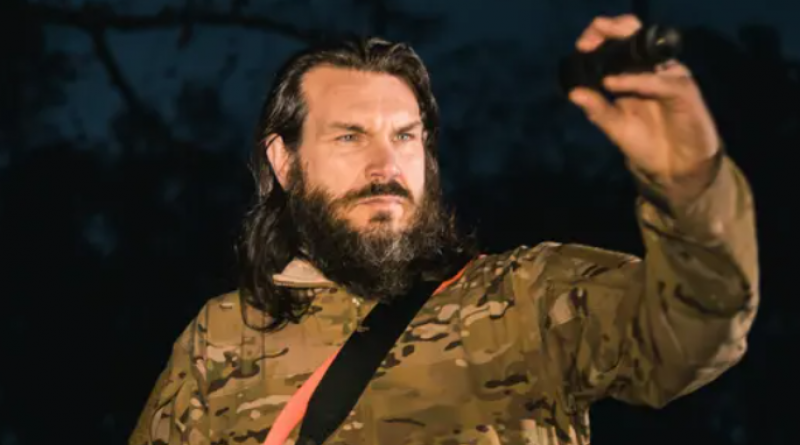 Thanks to climate change, armadillos, native to southern America, are making their way up north. And there’s no sign of them stopping their relentless march

In the pitch dark, Jason Bullard adroitly shoulders his rifle and levels it at the object. “That looks like one!” he mutters. It turns out to be a fuse box. Another candidate, again aimed at with the gun, reveals itself as a rock.

In this town besieged by armadillos, anything with a passing similarity to the armored nemesis is under suspicion.

Bullard, an affable man in a camouflaged shirt, with a sonorous voice and prodigious beard, has rapidly gone from never seeing an armadillo in his bucolic corner of western North Carolina to killing 15 of them last year. In just the last two weeks, he has dispatched eight of the animals.

Homeowners, perturbed at their lawns being torn up by the newly arrived mammals, initially deputized Bullard as a sort of armadillo bounty hunter, handing him $100 for every dead carcass he produced. But armadillos have wreaked such horticultural havoc that dozens of people in and around Sapphire, North Carolina, now have Bullard on a retainer, allowing him to prowl around their properties at night, armed, in the hope of shooting the culprits.

The task has been learned hastily on the job. The standard .22 rifles Bullard used on the first armadillos didn’t seem to kill them outright. One of the creatures bounded away in a freakish, kangaroo-like hop, leaving an astonished Bullard flailing. The armadillos give off a sort of loamy grey color at night, a shone light absorbed by their bodies, rather than reflected in their eyes.

“It’s like hunting aliens,” said Bullard, who is more used to hunting feral pigs. “We know nothing about them. We can’t seem to kill them easily. They show up unexpectedly. And their numbers have just exploded.”

To spot armadillos in North Carolina was, at first, incongruous. The creature has been Texas’s state mammal for more than two decades, used to the baking heat of the dry, flat state. There, they’re regularly seen as roadkill or in small-scale racing events where they are made to scurry down a 40ft track.

Armadillo meat is consumed in Central America, and to a lesser extent in the US, where it was called “poor man’s pork” in Depression-era Texas and has been tainted by the species’ connection to leprosy.

Sapphire, meanwhile, is nestled 800 miles and worlds away in the soaring Blue Ridge Mountains. It is part of a scenic plateau that gets so much precipitation that it has developed a temperate rainforest, with the ground and rocks draped in lush mosses amid towering fir and spruce. In autumn, the area is a gorgeous riot of red and orange fall hues. The area even has a small ski resort.

When the first armadillo was sighted here in 2019, Bullard got a call. “I just didn’t believe it,” he said. “I thought the woman had a possum and a drinking problem.” But within a year, Bullard was spending his nights at the local golf course, speeding from hole to hole on a golf cart, killing armadillos on the greens like a sort of cross between Tiger Woods and Davy Crockett.

The Sapphire valley is the latest place to witness the seemingly relentless northward march of a species that originated in South America, but is now pushing toward the north-east of the US.

“It’s only a matter of time before we see range expansions into other states,” said Colleen Olfenbuttel, furbearer biologist at the North Carolina wildlife resources commission. The agency confirmed the first armadillo in North Carolina in 2007 but numbers have rocketed in the western half of the state since 2019. “It’s challenging to deal with armadillo damage. They are hard to trap and I don’t know if there’s a repellent for them,” said Olfenbuttel. “I’m as curious as anyone as to where they will pop up next.”

The nine-banded armadillo – there are 20 different species, only the three-banded variety can roll itself into a ball – made its way north from Mexico to the US through human intervention and its own ingenuity by the late 19th century. The animals, known for their keratin armored shells, travel unhindered by potential predators. A booming reproduction rate that sees females give birth to quadruplets multiple times also helps their population’s growth.

An emerging theory for this advance of armadillos is the climate crisis. The animals dislike freezing conditions and global heating is making winters milder, turning northern parts of the US more armadillo-friendly. Around Sapphire, the armadillos happily root around in the dirt with their snouts and claws, feasting on insects at elevations above 4,000ft. “We just don’t have those really cold winters any more and I’m sure that’s helped them,” said Olfenbuttel.

The armadillos have made it into Missouri, Iowa and even the southern reaches of Nebraska. Barriers such as rivers aren’t a problem – the animals can hold their breath for up to six minutes and walk on the riverbed, or even inflate their intestines to float across to the other side.

Robbins said he has had “a lot of fun” trying to catch the armadillos for research, due to their surprising speed. The odd hopping seen by Bullard comes from an armadillo reflex to jump around 3ft in the air when under threat – useful when in the clutches of a bear, less so when a car is approaching. “If you’re quiet, you can get close and grab them by the tail,” said Robbins. “They are very strong. Sometimes they will helpfully just jump up into your arms, and then you can put them straight into a bag.”

In March 2019, just as North Carolina’s armadillo sightings were starting to climb, officials in Virginia got a call from a baffled resident from Buchanan county, in the western part of the state. After noticing cone-shaped holes in her garden, the woman took photos of the first live armadillo documented in Virginia. “It was a complete shock,” said Nancy Moncrief, curator of mammalogy at Virginia Museum of Natural History. “My colleague said it had probably come from eastern Kentucky and I said ‘what are they doing in Kentucky?’ My next question was ‘can we get a dead one and put it in my museum collection?’”

Within a few months Moncrief had her wish, when a dog fatally attacked an armadillo close to the initial sighting. The dead animal was brought into the museum and its stored shell and skeleton form what is the first official specimen of the species in Virginia.

“We put it on Facebook and people were like ‘holy cow!’” said Moncrief. She suspects the animals are following food-rich river valleys along the Appalachians and will spread across Virginia in time. Armadillos may soon be marching on the White House, to New York, and beyond. “They are just going to keep snuffling northward,” Moncrief said.

Floods, sewage and crocodiles: the crisis of the Gambia’s sinking city