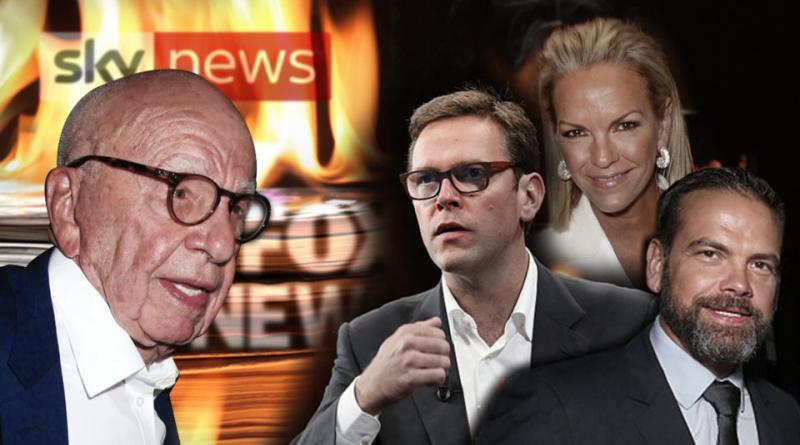 As Australia burns, speculation is growing that the sheer scale of the disaster might be the push News Corp needs to renounce denialism and change its partisan coverage of climate change.

A number of high-profile journalists have walked out of the company’s newsrooms in disgust – and now Rupert Murdoch’s son, James, has lashed both News Corp and Fox News for promoting climate “denialism”.

One day it’s likely a new generation of Murdochs will take the reins of the mass media corporation. But would that facelift mean the company’s editorial direction will change?

With the Murdoch press the most influential in the nation, it’s undeniable that Australia’s political direction – including the future of climate policies – hinges on the backing of its news outlets.

Australia’s climate policies are ranked among the worst in the world, and the bushfire crisis has sparked growing criticism of how Murdoch’s influential news outlets are influencing the debate and pushing misinformation on the link between climate and fires.

But there have been signs this week that the tide is starting to turn against the media empire’s right-wing slant – even from within the company. This could have significant impact on the coverage of climate change issues.

On Thursday morning, the Murdoch-owned NT News – usually garnering attention for its cheeky croc front pages – took a stand, declaring in bold print “now is the time to discuss climate change”. Editorials by Melbourne’s the Herald Sun have not shied away from the topic of climate change this week either. 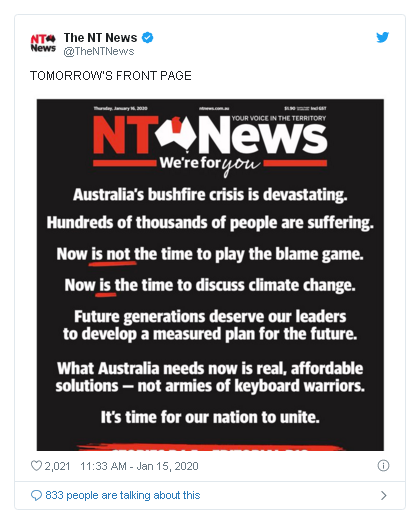 It comes after James Murdoch and his wife Kathryn called out the “ongoing denial [of climate change] among the news outlets in Australia given obvious evidence to the contrary”.

Back in 2007, Rupert Murdoch appeared to be siding with climate science,  promising News Corp would be carbon neutral by 2010.

That promise didn’t last and the company reverted to its old ways.

On November 24, with bushfires already raging, Australian columnist Chris Kenny wrote: “Hysterical efforts to blame the fires on climate change continue, even though we have always faced this threat and always will.”

Hobart barrister and columnist for The Mercury Greg Barnes took to social media on Wednesday night to defend the paper’s commitment to writing about climate change. 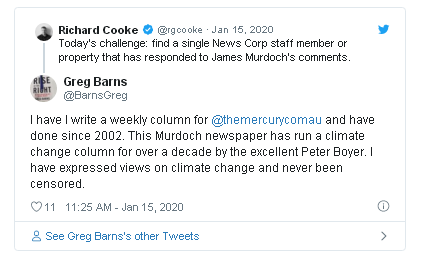 So far the bushfires have claimed 28 lives, wiped out an estimated billion animals, destroyed more than 2000 homes and burnt through more than ten million hectares of land.

“It’s a very political media with a lot of columnists and editorial line which up until recently, didn’t accept and did everything to undermine the science on climate change,” Dr McKnight told The New Daily.

The couple have not hidden their views on climate change. In an interview with The Observer in 2009, he called for urgent action on climate change and labelled most of the policy making in that area “totally gutless”.

But previously his comments have been about policy and the issue in general. Dr Simons noted it wasn’t the first time insiders – current or former – have criticised the company’s editorial direction. 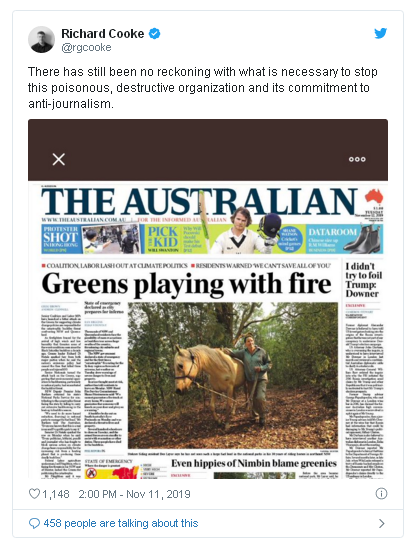 “During the last 12 months, we’ve had some of the best journalists atThe Australian leave … which is not surprising because (climate change) is a defining issue for a generation,” Dr Simons told The New Daily.

Last year, the newspaper’s former social affairs writer Rick Morton went on record, saying the “craziness has been dialled up”. And only last week, a News Corp employee sent a company-wide emailcriticising the organisation for spreading “climate change denial and lies” through “dangerous reporting”.

But despite the exodus of top journalists and public criticism of the corporation, Dr Simons said “it would be a mistake to think it was reconsidering its direction”.

Sooner or later, the younger Murdochs will seize the reins.with eldest son Lachlan tipped to take over. Rupert has six children from three previous marriages.

“There is a strong ideological corporate culture at News Corp, which can be a real strength, but it means they’re very resistant to change,” Dr Simons said.

“If we assume the family does remain largely in control, that’s the question we address to Lachlan, who is reputed to be more right-wing than his father.”

“Even though James Murdoch occupies a directorship in the company, the real power in News Corp lies with Rupert and increasingly with Lachlan,” Dr Muller told The New Daily.

“Lachlan is reputedly even more reactionary than Rupert, so anyone who thought generational change at the top of News Corp would make any difference is doomed to be disappointed.”

Floods in Evia, Greece Leave 5 Dead – a Baby Among Them – and 2 Missing