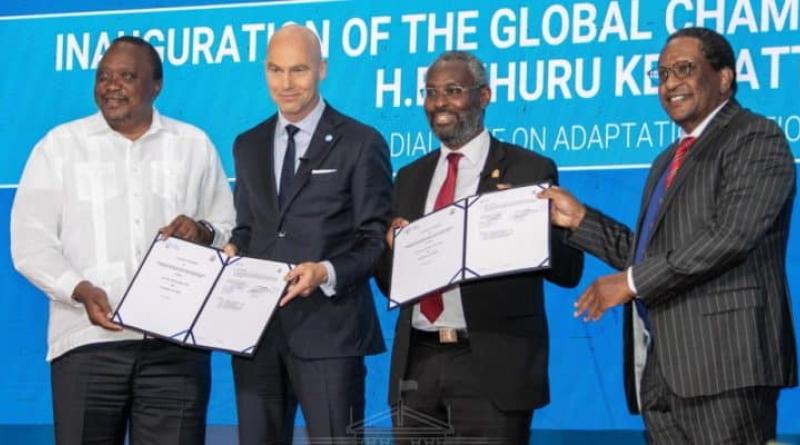 World leaders are tasking Kenyan President Uhuru Kenyatta to lead Africa's efforts to combat climate change under the African Adaptation Acceleration Programme (AAP). Launched on 25 January 2022 by the African Development Bank (AfDB) and the Global Centre for Adaptation (GCA), the AAPA aims to mobilise $25 billion to scale up climate change adaptation in Africa.

Kenyan President Uhuru Kenyatta is the global champion of the African Adaptation Acceleration Programme (AAAP). He was elevated to this position at the Global Leaders’ Dialogue on Climate Change Adaptation organised on 7 July 2022 at the University of Nairobi, Kenya, by the Global Centre for Adaptation (GCA).

The title was officially presented to the Head of State by GCA CEO Patrick van Verkooijen, who commended President Kenyatta for his efforts to address the climate change challenge. “This is the battle of our lives, to contain, adapt to and, in the process, tame climate change. And in you, President Kenyatta, we have a champion lion tamer,” says Patrick van Verkooijen.

The AAAP was launched on 25 January 2021 by the AfDB and the GCA on the sidelines of the Climate Change Adaptation Summit (CCAS), co-hosted by the Dutch government and the GCA. The programme aims to mobilise US$25 billion to scale up adaptation to the effects of climate change in Africa.

In his acceptance speech, the AAAP global champion noted that most of the socio-economic challenges facing Africa are attributable to climate change and pledged his full commitment to advancing the continent’s adaptation agenda. “As a champion of adaptation, I will be the voice of all voiceless Africans who demand a prosperous and climate-resilient future,” President Kenyatta said, adding that climate change had become an existential threat to all countries in Africa.

According to the AfDB, Africa loses between $7 billion and $15 billion annually to climate change. And these losses are expected to reach $50 billion per year by 2030. The same source adds that the continent receives only 3% of global climate finance. Yet nine of the ten countries most vulnerable to climate change (90%) are in Africa, which generates only 4% of global CO2 emissions.