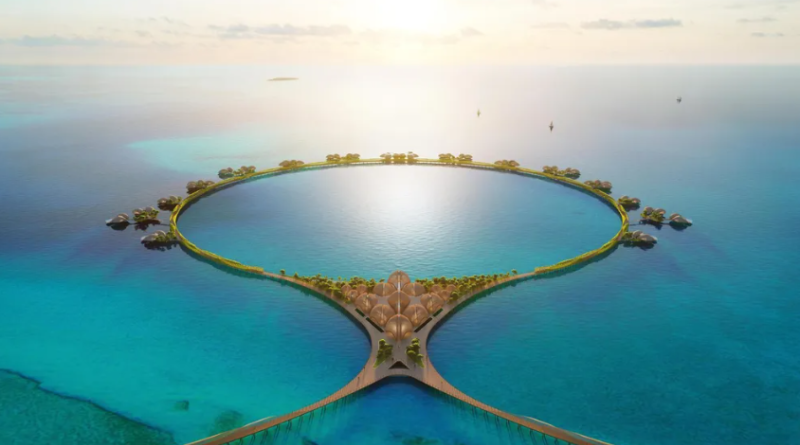 The installation of the last connecting piece for the 1.2-kilometre Shura Bridge has successfully been completed. The bridge is a key component of infrastructure that is being developed as part of Phase One of The Red Sea Project.

According to the Red Sea Development Company (TRSDC), the bridge has been built and designed with sustainability in mind. During the construction phase, the company explained that there was nearly zero drainage discharge into the lagoon. Multiple monitoring buoys were also sited strategically to alert any breakthrough from surface booms. The monitoring buoys helped prevent sediment movement from piling activities.

The D&B contract for the Shura bridge project was awarded to ARCHIRODON. back in June 2021. The contractor ensured that they reuse temporary materials to minimize waste. The temporary materials used were causeway rock armor while 90% of the concrete was precast. This helped to minimize the probability of its in-situ concreting environmental issues.

The project also considered the marine ecosystem that surrounded the site. Thus, ARCHIRODON and TRSDC stated that the bridge’s location was optimized to minimize the need for coral relocation as well as dredging. The bridge will also have two, 36-meter small sections at the end of each crossing. This will facilitate the uninterrupted movement of marine animals.

The Red Sea Project is a property and land megaproject that is currently being developed in Saudi Arabia. It is under the management of The Red Sea Development Company (TRSDC) and the project is and forms a part of the Saudi Vision 2030 program. The megaproject will be located between the cities of Al-Wajh and Umluj, within Tabuk province’s shores of the Red Sea.

The Red Sea Project was announced by Mohammad bin Salman, the Saudi Crown Prince, in the month of July 2017. The project’s focus is on ecotourism and luxury in an effort to attract both local and international visitors to the Red Sea coast.

In addition to potentially transforming Saudi Arabia into a top tourist destination, the Red Sea Project is also expected to increase the country’s GDP by about US$ 5.86M per year. When completed, it will cover an area of 28,000 square kilometres. It will include deserts, islands, volcanic, beaches, and mountain areas.

The project is divided into phases and the first phase is scheduled to attain completion in 2022. The first phase of the project which began in 2019, will include the construction of a Marina centre, 14 hyper-luxury and luxury hotels, the Red Sea International Airport, and recreation centres. It is also revealed that there will be ninety unspoiled offshore islands situated between the two cities of Al-Wajh and Umluj that will be a part of this massive project.

The megaproject is also projected to attract well over one million people every passing year. Ecological considerations have also been prioritized in the massive megaproject, through a number of policies. These include but are not limited to no discharges to the sea, no waste to landfills, no use of single-use plastic, and aiming to achieve a 100% carbon neutrality rate.

The Red Sea Development Company (TRSDC) has awarded the contract for the construction of the Red Sea International Airport; its largest value contract to date for airside infrastructure works for the destination’s international airport, is set to open in 2022.

The contract was awarded following a competitive tendering process to a joint venture between leading Saudi contractors Nesma & Partners Contracting Co. Ltd and Almabani General Contractors, both of whom have a strong track record for delivering similar projects in the region.

According to John Pagano, CEO of The Red Sea Development Company, the company is making huge progress in the development of a world-leading destination and by awarding the largest contract to date, the company takes another significant step in this direction, while demonstrating the ongoing commitment to creating opportunities within the Saudi Arabian construction sector.

“Turning our vision into reality will require us to work with organizations that share our values and our uncompromising commitment to enhancing the environment. This was a key consideration when appointing Nesma & Partners Contracting Co. Ltd and Almabani General Contractors. Both our partners have impressive expertise in delivering airside infrastructure, coupled with both local and international experience,” he said.

Once complete, the Red Sea International Airport will serve an estimated one million tourists per year catering to both domestic and international flights. Envisaged as a unique and iconic airport, it will provide an unforgettable aviation experience for travellers and guests. In addition to the dedicated airport, the first phase of the development includes sixteen hotels offering 3,000 hotel rooms across five islands and two inland sites, as well as commercial, retail and leisure facilities and other infrastructure.

LONGi, the Chinese manufacturer of photovoltaic solar modules, has been awarded the contract to supply solar panels for the Red Sea Project. The manufacturers are to supply the project with 406 megawatts of its Hi-MO 5 bifacial modules to SEPCOIII Electric Power Construction Co., for the Saudi Arabian project.

The agreement between TRSDC and LONGi will also include the construction of three seawater reverse osmosis (SWRO) plants that will be designed to provide a solid waste management centre, and an innovative sewage treatment plant (STP) and clean drinking water.

The Red Sea Project is located on the country’s west coast and will be completely powered by renewable energy. The project will be using energy that will be generated via wind turbines and solar panels to meet the initial demand of 210 megawatts.

The developer behind what is now viewed as the world’s regenerative tourism project with the grand ambition, The Red Sea Development Company (TRSDC) officially awarded its highest value contract to date to a consortium led by ACWA Power.

The contract included works to build, operate and transfer the Red Sea Project’s utilities infrastructure that generates up to 650,000 MWh of carbon dioxide-free power. The amount of carbon dioxide emission that has been cut down from the switch to renewable energy is said to be equivalent to about half a million tons annually.

The Red Sea Project is said to have achieved and surpassed significant milestones. The project is scheduled for completion in 2030 and upon which there will be well over 50 hotels that are offering around 1,300 residential properties as well as 8,000 hotel rooms across the six inland sites and the 22 islands present.

The project is an essential branch of Saudi Vision 2030 and its completion will open doors to a new path and way of life in the Middle East.

The financial close for the US$ 1.302bn senior debt facilities for the Red Sea Multi-Utilities Project has been attained according to ACWA Power, the company that in December, last year but one, was awarded a 25-year design, build, operate and transfer contract for the project by The Red Sea Development Company (TRSDC).

The financing of the project will be provided by a consortium of international and Saudi Arabian banks.

The energy requirements for the development of the project will be generated on a sustainable and fully dispatchable basis by a 340MW solar photovoltaic plant. It will include an associated storage system that uses a battery energy storage system (BESS) plant for captive use. The system has been designed with a capacity of c. 1.200 GWh, which upon deployment will be one of the world’s largest utility-scale BESS systems. The Battery Energy Storage System has also been designed to allow for the development of remaining completely off-grid.

The Red Sea Multi-Utilities Project will also include the construction of three seawater reverse osmosis (SWRO) plants that will total a capacity of 32,500 cubic meters per day. These plants will provide clean drinking water, and efficient waste management centre, and an innovative sewage treatment plant (STP). The latter will enable waste to be effectively managed in a way that enhances the environment by creating new wetland habitats while at the same time, supplementing irrigation water for use for the TRSDC landscape nursery.

Start of implementation of the project

The first phase of the project, under which TRSDC expects peak power and water demand to reach 210MW and 30,000 cubic meters a day (cm/d) respectively, is expected to be launched by the end of this current year.

This will be increased further to 360MW and 50,000 cm/d when the project reaches its second phase.

The manufacture of piles for the iconic bridge to Shurayrah Island along with two smaller bridges within the Red Sea Islands Project has been completed. Saudi BAUER Foundation Contractors Ltd, a subsidiary of German group Bauer Spezialtiefbau GmbHBauer  were the contractor under a contract awarded by the Saudi unit of leading shipbuilders Archirodon

The works also included the construction of a central bridge that connects the main island of Shurayah with the land to assist the Bauer Team in the construction of 87 offshore piles and the deployment of Archirodon’s custom-built floating crane and crew. For the drilling works, a Bauer BG 28 drilling rig was securely placed onto a barge and fastened.

Referencing an official statement, Bauer confirmed that Archirodon was commissioned by The Red Sea Development Company (TRSDC) to build and design the bridge leading to Shurayah Island.

The project implementation began in September 2021.