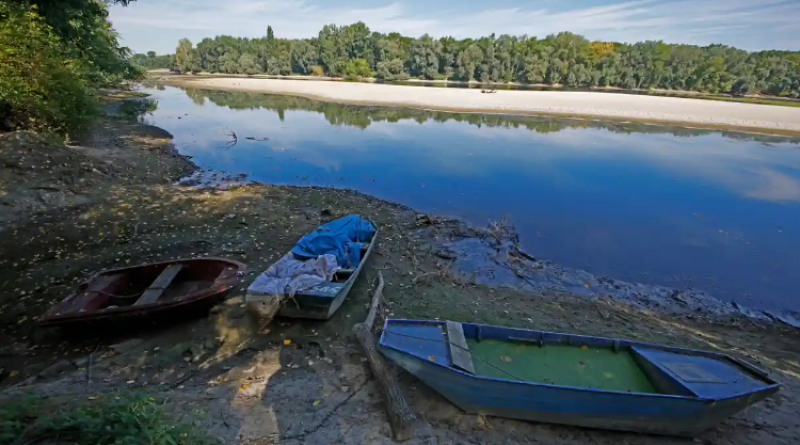 Germany’s Rhine, one of Europe’s key waterways, is just days away from being closed to commercial traffic because of very low levels caused by drought, authorities and industry have warned.

Crucially, the impending crisis could lead energy companies to cut their output, one of the country’s biggest gas companies has said.

Businesses located along the Rhine or dependent on it to transport or receive goods are warning that they have been forced to scale back activities and reduce loads drastically – and are now on the verge of having to close some production if cargo ships are no longer able to access the river.

The Rhine, which runs about 760 miles from the Swiss Alps to the North Sea, is the second largest river in central and western Europe after the Danube. The majority of nearly 200 million tons of cargo shipped on German rivers – from coal to car parts, food to chemicals – is transported on the Rhine.

Its dangerously low levels recall the drought that shut it down for around six months in 2018. Cologne’s Waterway and Shipping Authority has said the “unusually low levels” for this time of year meansbarges have had to reduce their cargo “in order to be able to navigate the river”. This increases prices and reduces the speed with which goods can be transported.

Of major concern, as Germany braces itself for a winter of energy rationing due to an 80% reduction in gas flows from Russia, is the knock-on effect the depletion in river traffic could have on energy output.

Uniper, Germany’s biggest distributor of Russian gas, which already recently needed a multi-billion euro bailout by the German government to stop it collapsing, has cautioned of potentially “irregular performance” for the next month at Staudinger-5, its coal-fired, 510-megawatt power plant east of Frankfurt – a major tributary of the Rhine – due to interruptions to coal delivery supplies along the river.

As demand for coal has increased, Germany’s economy minister, Robert Habeck, has decided to recommission coal-fired power plants, which had previously been mothballed but are now seen as a temporary solution to help Germany wean itself off Russian gas.

Industry bosses in Germany, seeking to stave off recession amid high energy prices and rampant inflation, are now paying almost as much attention to daily river levels as they are to the amount of gas flowing from Russia (20%, or 33 million cubic metres).

Of more immediate concern are the levels of gas stored at almost two dozen facilities around the country, standing on Thursday at 70.39%.

Low water levels usually occur much later in the year, but reflect the drought conditions affecting large parts of Europe.

This week, the French energy supplier EDF said it was temporarily reducing output at its nuclear power stations on the rivers Rhône and Garonne as heatwaves restricted its ability to use river water to cool the plants.

Meanwhile, in the UK the source of the River Thames was reported on Thursday to have dried up for the first time since records began due to a lack of rainfall.

To take a snapshot of the situation in Germany, in Cologne, the largest city on the Rhine, areas of the river have been reduced to a mere trickle. On Thursday the overall level was 1.03 metres with experts saying there was little chance of change in the coming weeks and the level could fall even further due to lack of rainfall.

According to Cologne’s city drainage operations, ships wanting to navigate the river have a total height allowance of 111 centimetres plus the water level of 103cm – in other words, just 2.14 metres beneath their keel. Any ship deeper than that was likely to get stuck, they warned, adding that captains carry the sole responsibility for the safe manoeuvre of their vessels.

According to Christian Lorenz, of Ports and Freight Traffic Cologne, a lot of freight traffic had already reduced its cargo by half in order to be light enough to travel safely.

“Typically a cargo ship carrying salt from Heilbronn would be carrying 2,100 tons on board, but on Monday this had to be reduced to just 900 tons due to the river level,” he told German media. To make up for the reduced capacity, companies are facing the more expensive options of either using more ships or reloading on to lorries or goods trains – but both are currently in short supply. Ships, in particular, are in demand in the Black Sea to bring grain supplies from Ukraine, now possible for the first time in months.

Plans are under way for the construction of low-lying barges and ships as well as for the deepening of the Rhine, and better forecasting of water levels as a result of the 2018 crisis, but these measures are slow in being realised.

The timing of the Rhine’s shrinking could hardly be worse from an economic perspective. Many of the businesses dependent on it have been racing to fix supply chains massively interrupted by the pandemic and urgently trying to replenish their stocks.

Environmentalists are also raising the alarm as rising temperatures lead to a high concentration of pollutants which can be damaging to the flora, fauna and fish.

Swimmers have also been warned to keep away from the river because a reduction in water levels can lead to narrower channels and stronger currents.

Quiet flows the Po: the life and slow death of Italy’s longest river