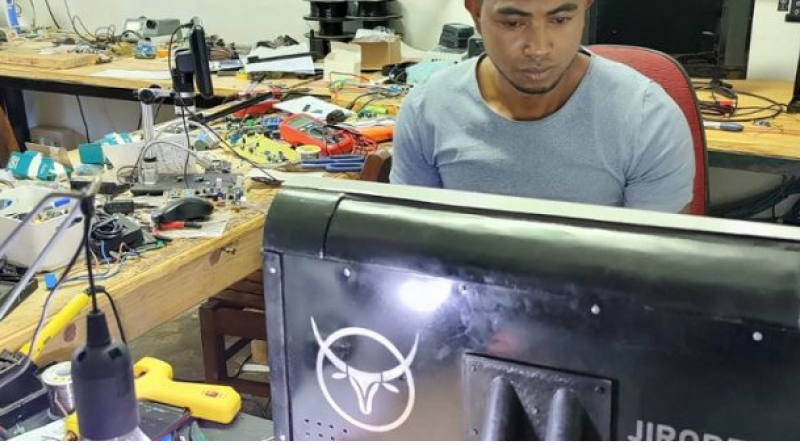 The Madagascar-based Jirogasy, which designs, manufactures and assembles solar IoT systems and computers, is fundraising as it plans growth into new markets.

Formed by brothers Yann and Lauric Kasay, as well as two other co-founders, after a crowdfunding campaign in 2018, Jirogasy aims to innovate and create appliances that address local challenges. Its key early offering is the Jirodesk 2.

“It is pretty hard to use a computer in off-grid areas of Madagascar and the difficulty stops entire fringes of local populations from accessing modern tools of work, education and social life. This further contributes to their marginalisation in Madagascar, which is one of the least developed countries,” Yann told Disrupt Africa.

“The only choice Malagasies had before our computer was to use a large solar system that can support a computer, meaning that you had to purchase two expansive devices. With our product, we merged those two devices to make solar computers accessible, easy to install, and meant to be used in off-grid areas.”

The company is selling these computers mainly to schools and medical clinics, but it is also targeting public administrations, SMEs and the general public. Very innovative, and very new, with Jirogasy looking to build a market-leading position. And for that it is fundraising again.

“We started off the company with a simple and minimal crowdfunding to purchase a couple of tools in 2018, and we tried to develop Jirogasy step-by-step for two years, partnering with local NGOs and bringing in craftmanship to deliver Jirodesk 1,” Yann said.

“In 2020, we had the chance to be awarded a grant from Efficiency for Access coalition supported by IKEA Foundation, USAID and UK Aid, to scale and modernise our production tools. That has enabled us to invest in a months-long process of developing Jirodesk 2, a structural update to our initial computer.”

Recently, Jirogasy took on funding from the Jua Fund, and was accepted into Seedstars and Shell Foundation’s acceleration programme, all of which Yann hopes will help it towards securing a wider round to help it fulfill its expansion ambitions.

“We are currently operating in Madagascar in various rural areas – Antsirabé, Analamenga and other landlocked territories. But we are open for partnership and we most definitely have in mind to expand to new countries, with Indian Ocean and East Africa as our priorities, including Kenya, where we secure our supply of recyclable batteries,” he said.

“We crossed a milestone lately with six-figure revenues generated. We will look to expand past the seven-figure mark in the next 12 to 18 months.”

Starting any company is tough, Yann said, especially when the business climate and the administrative burden are not optimal.

“But we succeeded thanks to our first clients, that were true early adopters of our technology and who trusted us with our products when we hadn’t sold any and nobody knew about us. They kept us alive for the first two years of the project,” he said.

Now, Jirogasy is very much alive and kicking, and seeking new investment for the next phase of its growth story.

Scaling Up The Production Of Highly Efficient Solar Modules.