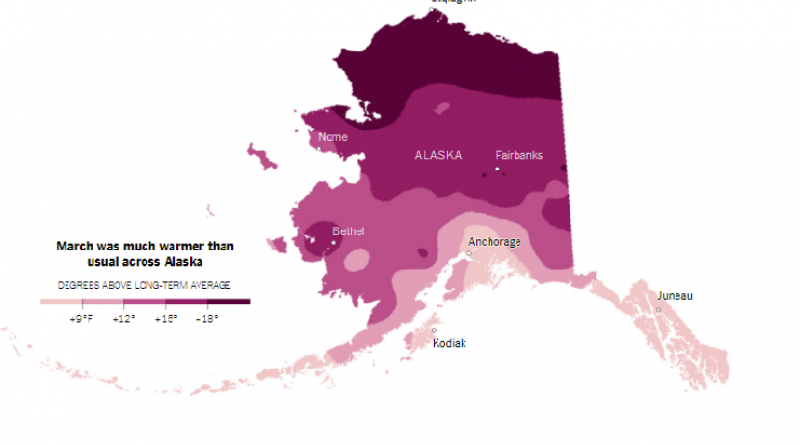 By local standards, Alaska has been sweltering this spring. Temperature records have been set across the state, including in Kotzebue, where the thermometer reached 42 degrees Fahrenheit on the last day of March — 30 degrees above normal.

On Tuesday the unusual statewide warmth was confirmed by the National Oceanic and Atmospheric Administration, which released data showing that, overall, March temperatures were as much as 20 degrees above historical averages.

The heat is an extreme example of the general climate-change trend in the state, which shows that the Arctic is warming roughly twice as fast as other parts of the world. Northern Alaska is no stranger to temperature anomalies: In November 2017, readings in Utqiagvik, on the North Slope, were so high that NOAA’s computers rejected them as faulty.

[Read more about how ice loss is disrupting life in Alaska.]

Two factors led to the March extremes, said Rick Thoman, a climate specialist with the Alaska Center for Climate Assessment and Policy in Fairbanks. One is the almost complete absence of ice in the Bering Sea, between Alaska and Russia. Open ocean is warmer than ice-covered ocean, and that helps heat the air over neighboring land.

As in the rest of the Arctic, sea ice in the Bering has been declining. But this year, a string of storms beginning in late January helped eliminate what little ice there was.

Alaska also fell victim to the wobbly jet stream that brought cold spells to parts of the continental United States. As the jet stream dipped down over the Midwest and East, bringing Arctic air with it, it trapped a region of warmer, high-pressure air over Alaska.

Glaciers lose nine trillion tonnes ice in half a century.

As the climate warms, how much, and how quickly, will Earth's glaciers melt?