More than 47,000 Brazilians hospitalised every year due to wildfire air pollution 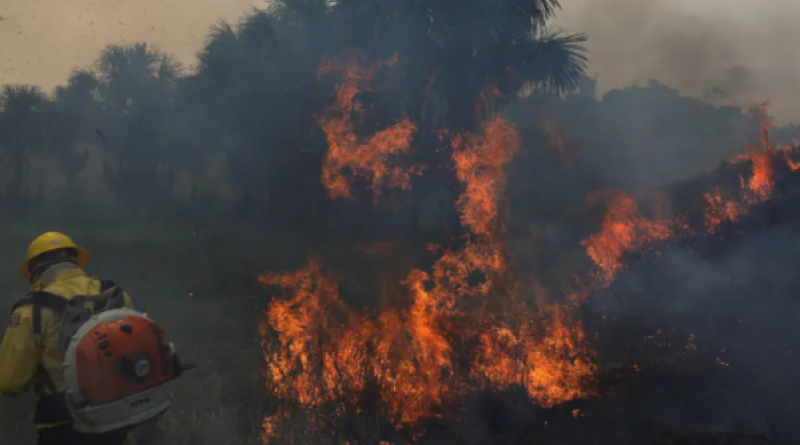 As Amazon sees record levels of destruction, health impacts are being felt hardest among young children and old people.

More than 47,000 people living in Brazil are hospitalised due to air pollution caused by wildfires every year, according to the largest and most comprehensive study to date examining the health burden of the blazes.

Last year, the number of wildfires in Brazil rose by 12.7 per cent to hit their highest levels in a decade, with the vast majority taking place in areas of the Amazon cleared to make way for agriculture.

The new study, published in medical journal The Lancet, highlights the “serious health consequences” of the burning, and links increased exposure to wildfire pollutants with increased levels of hospitalisation.

This year there have been 260 major fires across the Amazon rainforest, burning more than 105,000 hectares (260,000 acres) – an area roughly the size of the city of Los Angeles.

Of these, more than 75 per cent were in Brazil, despite a government ban on unauthorised outdoor fires.

Professor Yuming Guo and Dr Shanshan Li, from the Monash University School of Public and Preventive Health in Melbourne, Australia, led the international study into the health effects of these wildfires.

They found that more than 47,000 Brazilians every year hospitalised by wildfire pollution, mainly in the cities in the north, south and central-west regions. The north east regions of the country had the lowest rates.

The research team looked at more than 143 million hospitalisations from 1,814 municipalities, covering almost 80 per cent of the Brazilian population over the 16 years the study focused on – up until the end of 2015.

The scientists said that even short-term exposure to PM2.5, the small particulate matter within wildfire smoke, can trigger asthma, heart attack, stroke, a decrease in lung function, hospitalisation and premature death.

Professor Guo said: “This data reveals [the] significant health impacts of wildfires, at a time before the 2019 fires across Brazil captured global attention followed by an equally intense fire period last year.”

There have been increased fires across Brazil since the 1990s, largely due to deforestation and forest degradation from human activities such as mining, logging and farming.

While most wildfires occur in remote areas of Brazil, “toxic smoke from these wildfires in the Amazon region can rise as high as 2,000 to 2,500km up into the atmosphere and travel great distances, threatening people thousands of miles away,” Professor Guo said.

Air pollution is slashing years off the lives of billions, report finds