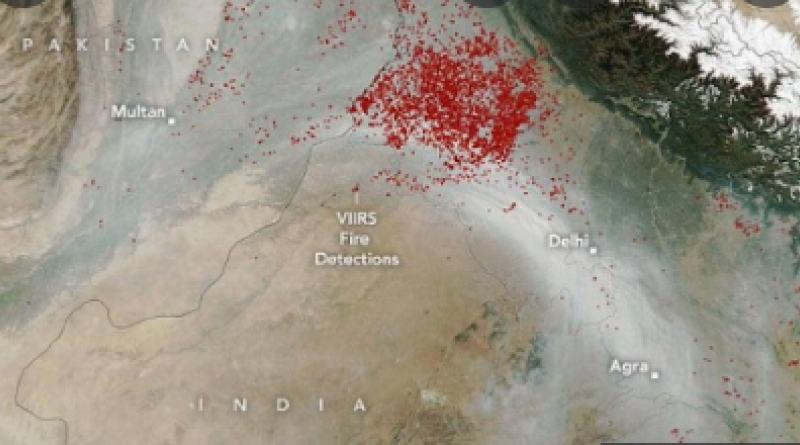 Recent satellite images released by Nasa show Delhi and the surrounding regions resembling an open-air chimney, as a vast plume of smoke is seen stretching hundreds of miles across India’s national capital.

The satellite imagery, which focuses on the country’s northern Indo-Gangetic plains, showed a thick “river of smoke” converging on Delhi, as a result of fires deliberately set in surrounding states, adding to the toxic air phenomenon that makes the Indian city’s residents suffer through winter every year.

In a report titled “A shot of smoke for Delhi”, the visuals captured by the space agency on 11 November point to the tens of thousands of active burning sites, mainly from the country’s northern states of Haryana and Punjab, where farmers torch crop waste every year to create space for a fresh batch of seed. 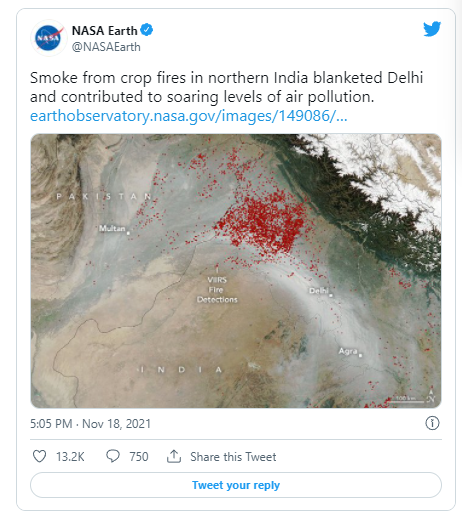 The federal and state governments have, so far, drastically failed to provide safer, less polluting alternatives to economically disadvantaged farmers, whose livelihoods would suffer if they stop burning waste.

The fires account for at least 10 per cent of the capital’s pollution problem as revealed by the federal government at a hearing of the problem in the country’s Supreme Court.

Delhi’s residents faced a sharp drop in the Air Quality Index (AQI) in late October when crop burning began in earnest after a wet spell ended, and the AQI across the city has remained severe for a large chunk of November already. Another cause that aggravates Delhi’s pollution problem has been the indiscriminate burning of fireworks on the Hindu festival of Diwali, which fell on 4 November this year.

Just a day after the festival, Delhi’s AQI level shot up to the maximum reading of 999 in many parts of the capital, where streets were engulfed in a blanket of smog.

Cold conditions with little to no wind routinely trap polluted air in Delhi, which is a land-locked region bordered by the Himalayan foothills to the east.

Schools and colleges, as a result, have been shut indefinitely in Delhi and its neighbouring states after India’s top court called the alarming AQI levels and smog an “emergency” and delivered a sharp rebuke to authorities for exposing children to poor-quality air outdoors at 7am.

Officials said the deadly smog has affected the health of millions.

“Looking at the size of the plume on 11 November and the population density in this area, I would say that a conservative estimate is that at least 22 million people were affected by smoke on this one day,” said Pawan Gupta, a Universities Space Research Association scientist at Nasa’s Marshall Space Flight Centre.

Delhi has been dubbed the world’s most polluted city and has regularly been in pole position in pollution rankings for three consecutive years.

On average, a resident in Delhi loses at least 9.5 years of their life because of polluted air, a study by the University of Chicago said.

Several authorities, including India’s top court, have pointed out that stubble burning is not the main factor and that farmers are not culprits.

“Now it has become a fashion to bash the farmers whether it’s Delhi government or someone else. There was ban on firecrackers (fireworks), what happened with that?” Supreme Court judge Surya Kant pointed out during the hearing last week.

The Supreme Court’s chief justice NV Ramana pulled up attorneys representing the federal and Delhi administrations. “You are making it as if farmers are responsible for this. What about the steps taken to contain the [internal] pollution in Delhi or steps like emission controls?” he asked.

The Nasa report also pointed out that Delhi has several of its own human-caused sources of air pollution. These include motor vehicle fumes, industrial and construction activity, fireworks and fires for heating and cooking, that produce toxic particulate matter and other pollutants.

Environmentalists have slammed the snail pace and lacklustre approach with which Indian governments approach the crisis. “Bad air is Delhi’s everyday reality and in other parts of the world. Cities like Beijing shut down when they cross 300 AQI but here we have normalised breathing bad air,” Indian environmentalist Vimlendu Jha said.

“It’s very frustrating to see a crisis like this which takes so many lives and the loss of the economy... and watch the government do nothing about it,” Mr Jha added.

‘Most extreme’ air pollution slashing life expectancy by up to a decade in India, damning new report finds