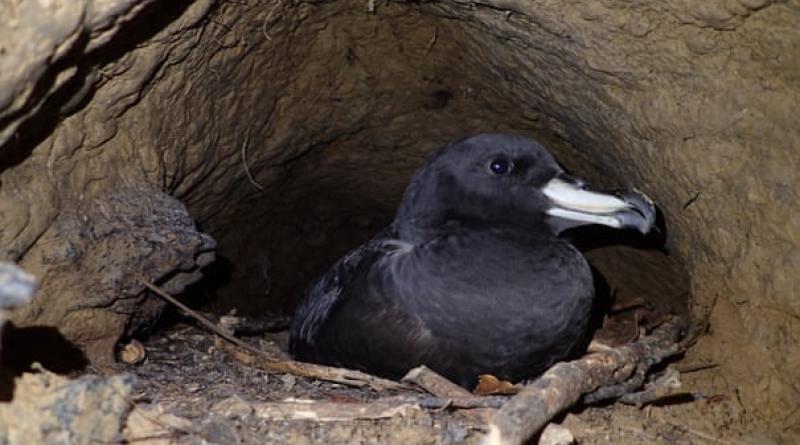 Westland petrel fledglings have been hitting the roads, possibly mistaking the lights for bioluminescent fish they feed on.

In an attempt to save a rare bird species, a New Zealand village is trialling an innovative strategy: it is switching off all its street lights to stop baby birds becoming confused and crash landing on to the road.

Westland petrels, which are blackish-brown with ivory beaks, breed only along an 8km stretch of coastal forest in the foothills near Punakaiki, a South Island town of fewer than 100 people and popular with tourists for its pancake rock formations and gushing ocean blowholes.

The 6,000 breeding pairs arrive from South America each March, an event celebrated by locals with a festival.

The fledglings are born in burrows dug into the hillsides and emerge to feed in preparation for the long journey back to South America. But some, believed to be disoriented by lights, crash on to the road, where they are often struck by cars or eaten by predators.

Local bird watchers believe the problem was worsened by the introduction of blue-white LED lights in the town last year.

But in what is believed to be a first for New Zealand, the local transport authority has agreed to a localised blackout, with 15 streetlights turned off along a 3.4km stretch of highway.

Local bird watchers have been enthusiastic about the move.

“It’s been great,” says Bruce Stuart-Menteath, who chairs the Westland Petrel Conservation Trust and has for many years helped relaunch disoriented birds and protect their habitat. “I’ve picked up only one this year. Typically a dozen would be the norm.”

The Department of Conservation (DoC), the agency responsible for wildlife, reported that just 10 Westland petrels had crash landed in the town this year compared to the usual 15 to 25.

Meanwhile, the fledgling seabirds have been crash landing on roads in much greater numbers in Greymouth, the biggest town on the west coast, 44km to the south.

“This year there were 22, compared to 10 being the highest number previously - and for the first time we are getting them in the CBD,” said Darrell Haworth, the DoC’s senior biodiversity ranger in Greymouth.

ights have been turned off this year.

“Whether lighting is the direct cause of all the Greymouth birds crash landing is not clear, however, most cases can be linked to lighting in the area, including lights on businesses and other private properties.

“Where petrels have come down in Greymouth we have talked with property owners and others with lights in the area to ask about lights being turned off, where possible.”

LED streetlights were introduced in Greymouth last year. But a spokesperson for the district council said it was looking into whether it was possible to turn the lights down or change the colour tone to orange.

Stuart-Menteath said the blue tinge of the LED lights could be confusing the birds as they feed on bioluminescent fish. “They fly over the sea and when they see a blue light they dive,” he said.

With only one breeding colony of Westland petrels in the world, DoC says every fledgling is needed for the species to survive.

While some Punakaiki locals were concerned about the hazard presented by walking on rough footpaths without lighting – transport authorities recommend they carry a dim torch – most supported the move, Stuart-Menteath said.

RSPB flooded with reports of birds of prey being killed.

Painting wind turbines black can help birds not fly into them.