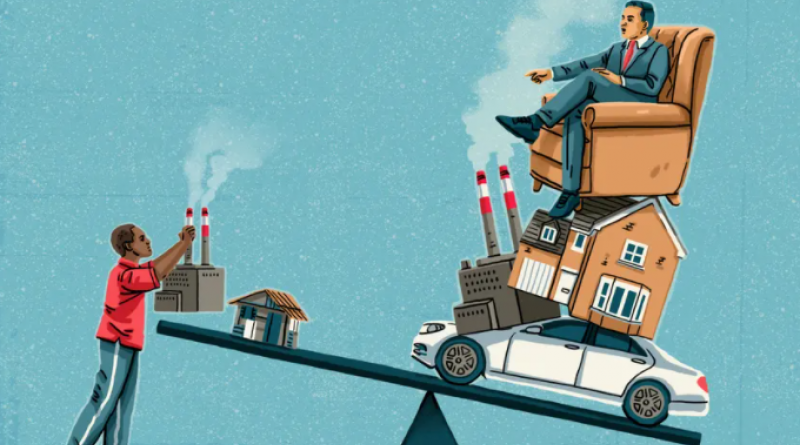 It’s no use telling developing nations to decarbonise. The west must accept it bears the bulk of the blame for the climate crisis

Acouple of hundred years ago Britain was not a lot different from many poor countries today. Life expectancy was low, infant mortality was high, living standards barely rose from year to year, water-borne diseases were rife. People worked long hours and life for the struggling was, as Thomas Hobbes put it, “nasty, brutish and short”.

Then the Industrial Revolution came along and Britain, followed by other countries in the world’s temperate zones, discovered the elixir of economic growth. After pretty much flatlining for more than a thousand years, incomes per head started to rise much more quickly.

Growth has resulted in shorter working weeks, longer lives and fewer people living in absolute poverty. More money has been spent on health, education and sanitation – all of it much needed. But – and there was always going to be a but – it has come at a cost. Two centuries of using fossil fuels to power economic activity with no regard for the consequences has led to global heating, which has now reached potentially catastrophic levels.

The good news from the early days of the Cop26 conference in Glasgow is that everybody admits there is a problem. The US president, Joe Biden, gets it, as does the British chancellor, Rishi Sunak. President Xi Jinping of China, although he has given the talks a miss, is as cognisant of the threat as France’s Emmanuel Macron or Germany’s Angela Merkel. The big beasts of global finance know they have to pledge obeisance to carbon net zero targets even while continuing to bankroll the fossil fuel sector.

It has taken a while to get everybody on the same page – much too long, in fact – but minds are now focused in a way they weren’t 10 years ago. Climate change deniers fought a long rearguard action against the scientists but have now been seen off. That’s welcome, as is the recognition that the challenges presented by the need to restrict temperature rises to 1.5C require a different form of economics.

Even so, there’s a real risk that Cop26 will end in failure, and that the search for a collective approach to tackling climate crisis will end in mutual recriminations and a blame game. The reason for that is simple: rich countries want poorer countries to set more stringent targets for reducing greenhouse gas emissions; poor countries say they will do so only if the plans are consistent with poverty reduction and a narrowing of the prosperity gap with the west. Poor countries point out that the current mess is largely the result of the long-term heating of the planet by rich countries.

Global heating is a problem that has developed over time. China is responsible for 28% of new global emissions; but of the stock of greenhouse gases, countries in Europe have contributed a third and the US just under a quarter. Rich countries are suffering much less from climate breakdown than poor countries, but it is the former that have the resources to reverse it. Beijing is not going to be made the fall guy if negotiations collapse, and says it is up to the west – with its abundant wealth – to make the running.

To meet the Paris goal of 1.5C, big amounts of CO2 are going to have to be eliminated each and every year between now and 2050. That will come at a cost. The US investment bank Morgan Stanley has put a price tag of $50tn (£37tn) on five key areas of technology – including $20tn for the development of hydrogen power, $14tn for solar, wind and hydro power, and $11tn for electric vehicles.

Despite plenty of promises, financial assistance has been slow in coming. Developing countries have every right to be cynical about the $130tn of financial firepower to tackle the climate crisis allegedly being marshalled by the world’s biggest financial companies, when past pledges of a $100bn a year from rich countries have yet to be met.

As the UN’s trade and development arm, Unctad, noted last week, adaptation costs for developing countries have doubled in the past decade as a result of inaction. “These will only rise further as temperatures increase, reaching $300bn in 2030 and $500bn in 2050,” it said.

It’s not hard to come up with suggestions for what should happen. Western countries could meet their financial obligations without delay. They could provide deeper debt relief for the growing number of countries in distress. Trade deals could be structured to prevent countries that take action against fossil fuel companies from being sued.

One idea from the economist Avinash Persaud is that countries that have contributed most to the stock of greenhouse gases should allow investors in climate crisis projects anywhere in the world to borrow from them at the ultra-low interest rates available in the west. This cheap finance would be rolled over for as long as the project showed some minimum rate of reduction in greenhouse gases. Persaud estimates that $500bn a year from this source could stimulate $50tn in private investment within 15 years.

Rich countries are insisting that money is tight in the aftermath of the global pandemic, but these are the sort of sums that will be needed for the west to be taken seriously in the developing world. Telling people with next to nothing that they are not going to be able to have what we take for granted is not going to cut it.

Op - The children of tomorrow will watch Boris Johnson’s Cop26 speech and ask – WTF, could you not have even tried?

Op - We need radical policies to reach net zero. Here’s a fairer way to do them