‘People are dying’: Ethiopians escape war only to face hunger in Somaliland 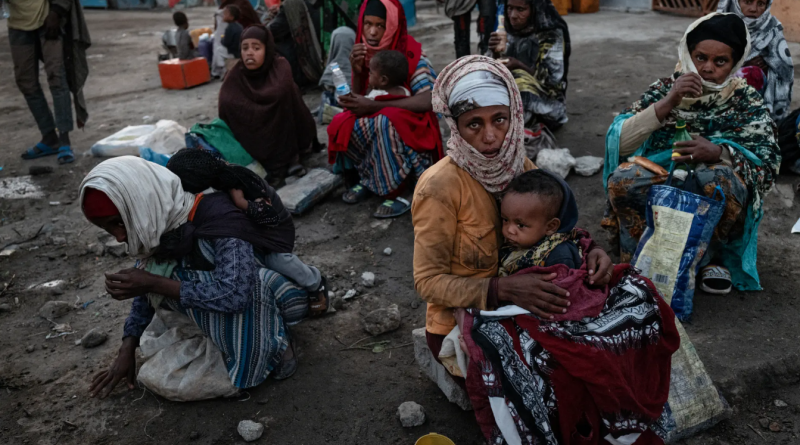 On the streets of border cities refugees rely on food handouts, while overcrowding in camps exacerbates the effects of the drought crisis

In the early hours of the morning, before sunrise, the refugees in Borama gather around vendors selling bread out of wheelbarrows, hoping for handouts.

The nearby tea shops do what they can to help, dishing out hot drinks to hundreds of people who have left fighting and drought in Ethiopia for sanctuary in Somaliland’s border city. At night, families lie in rows on the pavements, huddled under blankets.

In January, Anajow Abana travelled 300km from Tigray, in northern Ethiopia, to Somaliland. She and her three-year-old daughter are living on the city’s streets, surviving on the charity of local people.

“We fled fighting and drought,” she says. “The fighting was so bad and they killed my husband and two of my children. It took us 12 days to get here and was such a difficult time,” she says. 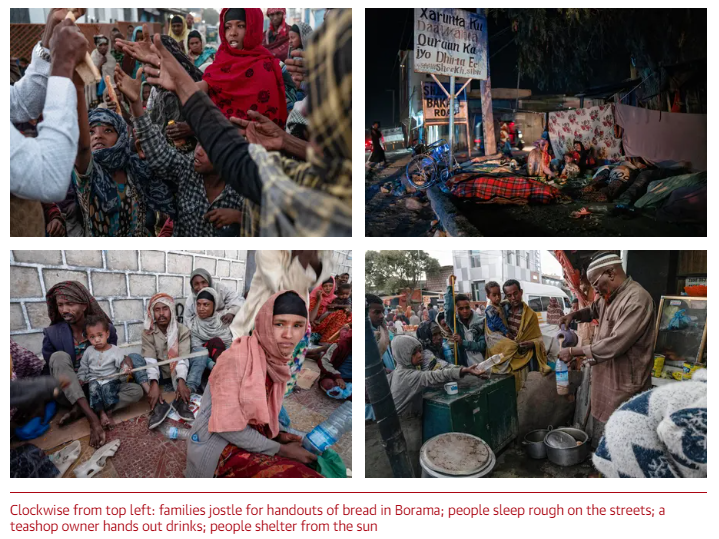 Mimi Tadasse is also living on the streets of Borama. It took her 14 days to reach the city. “We got here a week ago,” she says. “It was a hard journey. We had to go through areas of fighting, and it was very dangerous.”

Tadasse is from the Amhara region of Ethiopia, which has been engulfed in conflict during the war that began between forces loyal to the Tigrayan regional government and the Ethiopian armed forces in November 2020, and quickly spiralled to include a number of armed groups, regional militias and the Eritrean military.

Mohamed Warsame (Baradho), the mayor of Borama, which is home to about 200,000 people, believes the number of refugees in the city is much higher than estimates. According to immigration officials, at least 10,000 people arrived in the first two months of 2022, he says, and many more will have crossed the porous border unofficially.

Many refugees travel on to the capital Hargeisa and other areas, rather than staying in Borama. Some walk as far as Bosaso on the coast and try to get a boat across the Gulf of Aden to Yemen. From there, they walk to Saudi Arabia in the hope of finding employment as labourers or shepherds. People arriving from the Somali region of Ethiopia find it easier to assimilate and set up a shelter in the refugee camps, as they speak the language; it is much more challenging for those from Tigray, Amhara or Oromia.

We had a good life before. Then we couldn’t farm because of the fighting, so when the drought came all the animals died, Dayis Amin

There are two refugee camps in Borama, where it is estimated more than 2,000 families reside. Some have been in the camps for more than 20 years, others just a few days. There is little infrastructure, but there is a school built by Unicef, and local and international NGOs have assisted with latrines and water points.

The plight of the refugees in Borama is part of a growing crisis engulfing the Horn of Africa, where 16 million people in Somalia, Kenya and Ethiopia are in dire need of food. Consecutive droughts have exacerbated the effects of war, leading to water scarcity, livestock deaths, soaring food prices and acute insecurity. A poor start to the 2022 rainy season coupled with the war in Ukraine could have catastrophic results, Save the Children warned in April. 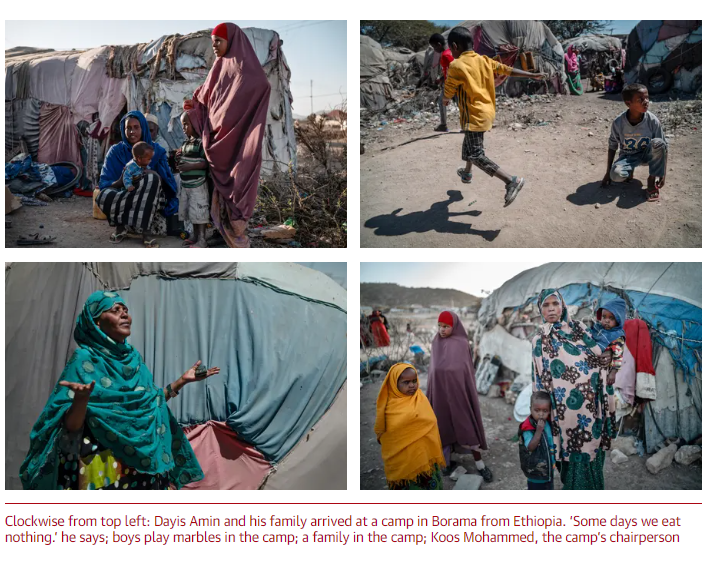 The mass movement of vulnerable people over insecure border areas threatens to further destabilise the region and harm communities, with many migrants facing the additional threat of unexploded ordnance (UXO) and landmines as they move through unfamiliar territories. The border with Ethiopia has been heavily fought over since the 60s, particularly during the 80s and 90s, meaning former battle sites are heavily contaminated with UXO.

Dayis Amin and his wife, Suldan, are living in a refugee camp in Borama with their eight children having fled a disputed area close to Harar, Ethiopia. They say they were unable to grow any crops because of fighting and drought. Amin says: “It is difficult here. Some days we eat nothing.

“We had a good life before. We had 20 cows and 30 sheep. Then there was trouble, and we couldn’t get by. We couldn’t farm because of the fighting, so when the drought came all the animals died.

“There were also explosions where we were, from the fighting. About six months ago, a group of children were playing with a metal item just 150 metres from our house. There was an explosion and five children died.”

Omar Mohammed, Somalia country director for MAG, a humanitarian organisation that clears UXO and landmines, says: “Moving across borders into Somaliland to seek humanitarian assistance or better conditions is the only way to cope for these people – while the UXOs and mines litter both sides of the border from previous wars. The UN estimates there were more than 317,000 newly displaced people within Somalia in January 2022 due to conflict and drought-related issues.

“We are doing our best to keep people safe by advising them of the risks of unexploded ordnance and landmines in the border areas, but they face multiple other risks because of the drought. Women and girls are having to walk longer distances to access water, for instance, exposing them to gender-based violence.” 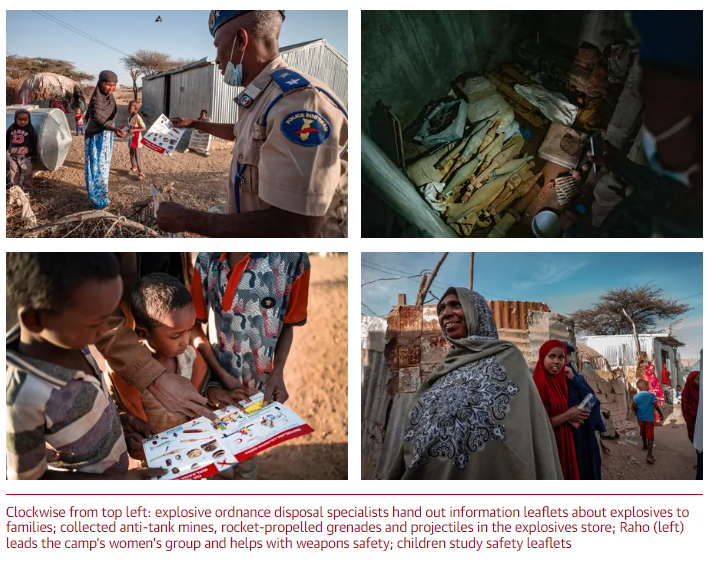 In the town of Baligubadle, approximately 170km south-east of Borama, refugees from Ethiopia arrive on a daily basis, along with displaced Somalis seeking water and food.

“People are dying,” says Abdi Karim Mohamed, director of families and livelihoods for the local government, “We don’t have enough water and we need help. Our reservoirs are dry. We bring water trucks all the way from Hargeisa, but that is very expensive and we can’t manage to do that very often.”

The Abdi Rahman family have just arrived in the town and are setting up makeshift shelters. “We had to leave our home because the animals were dying because of the drought,” says the family matriarch, Koos. “We had 200 goats before, but now we have only five. We have one cow – we lost four. The first animal died three months ago and then more died as they became weaker. We had lived there for generations but every year it became harder and harder to survive.”

Rein Paulsen, director for emergencies and resilience at the UN Food and Agriculture Programme (FAO) says: “We are most definitely now sitting on the brink of catastrophe, time is running out.”

Should the rains continue to fail, it will be the first time in more than 40 years that four dry seasons will have occurred consecutively. For people like Abana, and the millions of already vulnerable people in this part of the world, that is a terrifying prospect.