Public Parks Matter More Than Ever During a Pandemic. 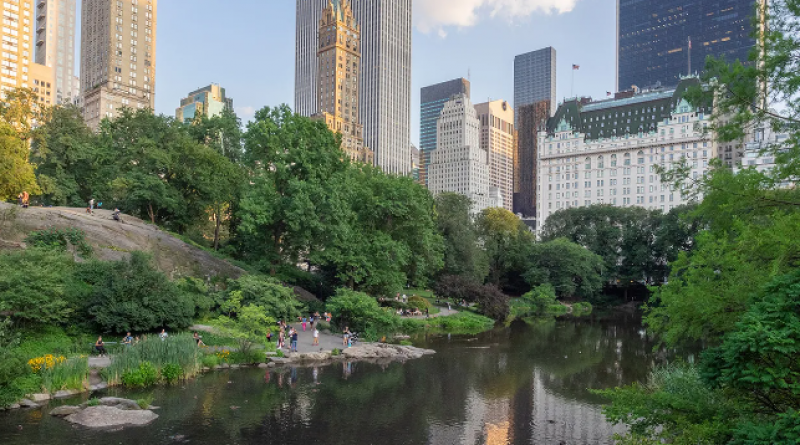 The COVID-19 pandemic has altered humans' relationship with natural landscapes in ways that may be long-lasting. One of its most direct effects on people's daily lives is reduced access to public parks.

The U.S. Centers for Disease Control and Prevention has issued guidelines urging Americans to stay at home whenever feasible, and to avoid discretionary travel and gatherings of more than 10 people. Emergency declarations and stay-at-home orders vary from state to state, but many jurisdictions have closed state and county parks, as well as smaller parks, playgrounds, beaches and other outdoor destinations.

There's good reason for these actions, especially in places where people have spurned social distancing rules. But particularly in urban environments, parks are important to human health and well-being.

As a landscape architect, I believe that Frederick Law Olmsted, the founder of our field, took the right approach. Olmsted served as general secretary of the U.S. Sanitary Commission during the Civil War, and his knowledge of contagious diseases informed his visions for his great North American urban parks, including Central Park in New York, Mount Royal Park in Montreal and Boston's Emerald Necklace park system. In my view, closing parks and public green spaces should be a temporary, last-resort measure for disease control, and reopening closed parks should be a priority as cities emerge from shutdowns.

Olmsted was born in 1822 but became a landscape architect rather late in his career, at age 43. His ideas evolved from a diverse and unique set of experiences.

From the start, Olmsted recognized the positive effect of nature, noting how urban trees provided a "soothing and refreshing sanitary influence." His "sanitary style" of design offered more than mere decoration and ornamentation. "Service must precede art" was his cry. 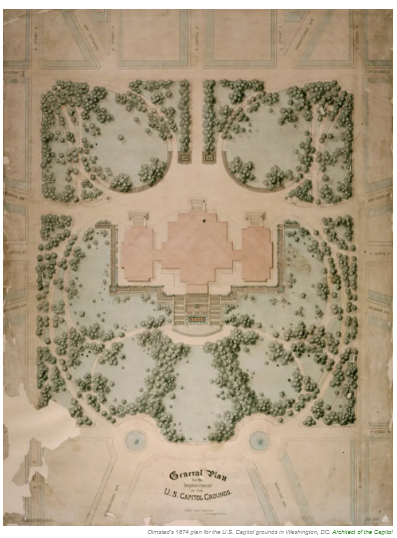 Olmsted came of age in the mid-19th century, as the public health movement was rapidly developing in response to typhoid, cholera and typhus epidemics in European cities. As managing editor of Putnam's Monthly in New York City, he regularly walked the crowded tenement streets of Lower Manhattan.

The insights Olmsted gained into connections between space, disease control and public health clearly influenced his landscape architectural career and the design of many urban park systems. For example, his design for the interlinked parks that forms Boston's Emerald Necklace foreshadowed the concept of green infrastructure.

This system centered on stagnant and deteriorated marshes that had became disconnected from the tidal flow of the Charles River as Boston grew. City residents were dumping trash and sewage in the marshes, creating fetid dumps that spread waterborne diseases. Olmsted's design reconnected these water systems to improve flow and flush out stagnant zones, while integrating a series of smaller parks along its trailways. 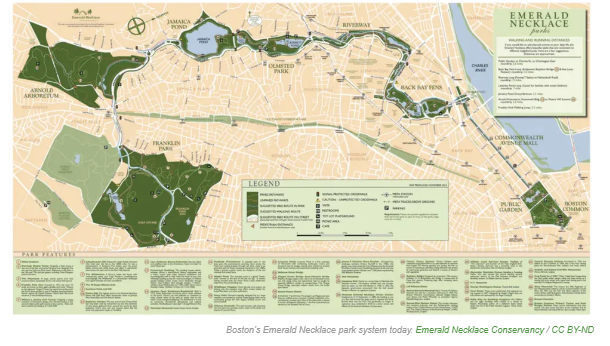 Olmsted also designed America's first bike lane, which originated in Brooklyn, New York's Prospect Park. Of the tree-lined boulevards in his design for Central Park, Olmsted said, "Air is disinfected by sunlight and foliage. Foliage also acts mechanically to purify the air by screening it."

In all of his urban parks, Olmsted sought to immerse visitors in restorative and therapeutic natural landscapes — an experience he viewed as the most profound and effective antidote to the stress and ailments of urban life.

Parks in the Time of COVID-19

Today researchers are documenting many health benefits associated with being outside. Spending time in parks and green spaces clearly benefits urban dwellers' psychological, emotional and overall well-being. It reduces stress, improves cognitive functioning and is associated with improved overall health.

In my view, government agencies should work to make these vital services as widely available as possible, especially during stressful periods like pandemic shutdowns. Certain types of public green spaces, such as botanical gardens, arboretums and wide trails, are well suited to maintaining social distancing rules. Other types where visitors may be likely to cluster, such as beaches and playgrounds, require stricter regulation.

There are many ways to make parks accessible with appropriate levels of control. One option is stationing agents at entry points to monitor and enforce capacity controls. Park managers can use timed entries and parking area restrictions to limit social crowding, as well as temperature screening and face mask provisions. 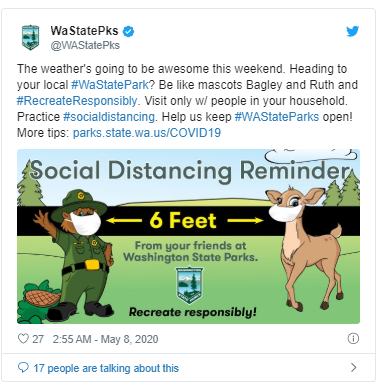 For example, in New Jersey, many public parks have reopened for walking, hiking, bicycling and fishing while keeping playgrounds, picnic and camping areas and restrooms closed. They also have limited parking capacity to 50 percent of capacity.

In Shanghai, China, the government recently reopened most parks and several major attractions, including the Chenshan Botanical Garden and the city zoo. Entry requires successful screening and online reservations, and visits are limited to a maximum of two hours.

Technologies such as GPS tracking and biometrics can set a precedent for future green space interaction. Residents could sign up for reserved time slots and log into apps that monitor their entry and distancing behavior. Some Americans might be put off by such technocentric means, but officials should be clear that making visitation easy and safe for all is the priority.

There will be challenges, especially when people flout social distancing rules. But urban parks and nature offer plenty of benefits that are especially important during a pandemic. I believe that finding ways to enjoy them now in a manner safe for all will be well worth the effort.