Remote Tasmanian island to be powered by ‘blowhole’ energy that harnesses waves. 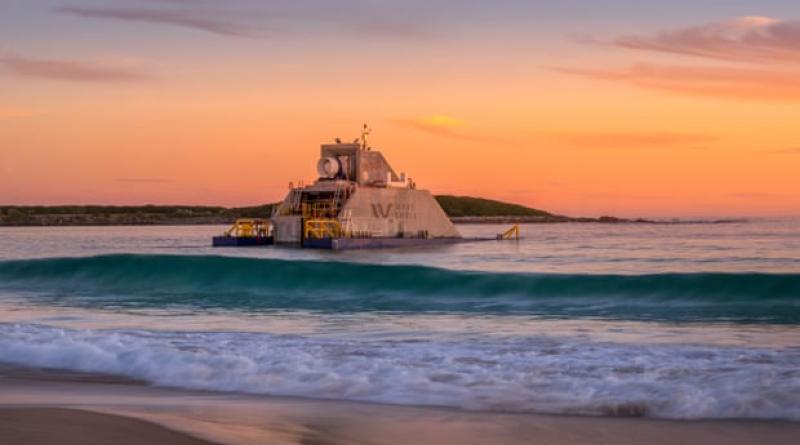 Hopes the above-water unit on King Island can be expanded across Australia’s vast southern coastline.

Technology that harnesses wave energy through a “blowhole” is being tested at a remote Tasmanian island in a project backed by federal grants and investors.

When the mostly above-water unit is connected in about a month, King Island in Bass Strait will be powered by three renewables – wave, wind and solar.

And there are hopes the project can be expanded across Australia’s vast southern coastline.

“It’s very much like an artificial blowhole,” he said. “There’s a big underwater chamber that’s open out the front, so the water is forced into the chamber.

“It pushes that air back and forth. The movement of air that spins the turbine and produces electricity.”

Studies by the CSIRO show Australian’s southern coast has great potential to generate energy from waves due to its large swell fuelled by strong winds.

Research by the peak scientific body estimates wave energy could contribute up to 11% of the nation’s energy by 2050, the equivalent of a city the size of Melbourne.

“Clearly there’s a massive wave resource. It’s definitely a resource worth pursuing,” said Denniss, who has a PhD in oceanography.

“We’ll have something soon but it’ll still be relatively small. It’s the future we’re looking towards.”

The boat-like structure can generate up to 200kW of power but there are plans for larger 1,000kW models.

King Island is home to about 1,700 people and draws about two-thirds of its annual electricity from renewables but can be powered up to 100% by green energy.

“This is just a demonstration of the technology at this stage,” Denniss said. “The aim of the project is to get a good estimate and generate data on how much it produces in different-sized waves.

“We want to see all different-sized waves so that we know across the full range of conditions what the unit can produce.”

The $8m project is backed by grants from the Commonwealth’s Australian Renewable Energy Agency as well as private investors.

Tasmania declares itself 100 per cent powered by renewable electricity.