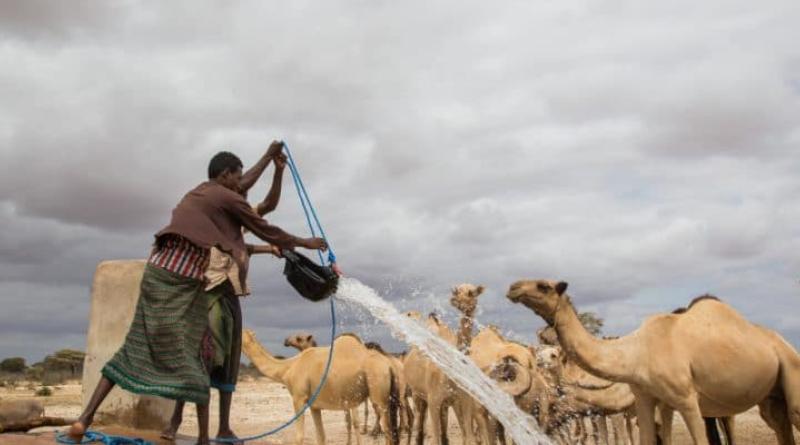 With funding from the United Nations Development Programme (UNDP), Aptech Africa and Genius Watter are completing the installation of a solar-powered desalination system in Caynabo, Somaliland.

In Somaliland, solar energy is facilitating access to water. In this internationally unrecognised state in north-western Somalia, the United Nations Development Programme (UNDP) has funded a project to improve the water supply in Caynabo. The recently completed project was carried out by Aptech Africa.

The Kampala, Uganda-based company built a solar-powered water desalination system. The reverse osmosis plant with a capacity of 45 m3 per second was supplied by Genius Watter, a company based in Carmignano di Brenta, Italy. The water pumping and desalination system is powered by a 41 kWp solar photovoltaic system.

“The water is extracted by pumps and fed through pipes to the hydraulic container. A series of valves have also been installed to ensure that the pumps are working properly. The site for this project was chosen because of its proximity to the well and its location in the centre of Caynabo,” says Aptech. This project is radically transforming lives in Caynabo.

In this municipality in the Sool region, more than 7,000 people still do not have a secure water supply. They have to travel long distances to get brackish water from wells constructed by the Somaliland government. According to Abdullahi Mohammed, the project coordinator of the Somaliland Ministry of Water, the lack of water in the region is such that some of the population is suffering from kidney stones, with most households not having access to even 5 litres of water per day.

The desalination solution in the Sool region

To ensure the water supply of the population, the desalination system is equipped with taps. Trucks transport water throughout the commune. In addition to filling the camel troughs, the new facilities should benefit the 7,000 inhabitants of Caynabo and an additional 3,000 people in the surrounding villages.

Faced with a long drought, the Sool region now relies on desalination of its groundwater to supply its people. In 2020, the locality of Oog, for example, benefited from a solar-powered desalination system. This small reverse osmosis plant was installed by the German start-up Boreal Light.

Droughts in Somalia are partly our fault. We could at least let more migrants in